A lurcher called Flo who was found abandoned in Lincolnshire two weeks ago has been able to take her first steps since having specialist surgery.
The young pup thought to be about 18 months old had been found in a bad state following sightings of hare coursing. There had been reports of men acting suspiciously in the area, with one witness saying they saw one of the men throwing a bag into a river. Charlotte Childs from RSPCA Lincoln said “whether they caused her injuries, or she was injured in some other way, the fact is Flo was abandoned.” 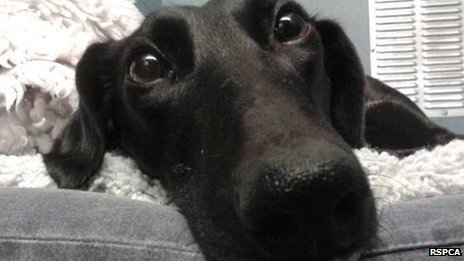 Unable to walk when they found her, Flo was transferred to the Dick White Referrals Veterinary Centre in order to ungergo two operations. The neurology specialist who carried out her operations said he had to ‘remove several blood clots and fracture fragments which were compressing her spinal cord’. Following the surgery, Flo has been making great progress and her carers have said they are very happy with her response. After a period of intensive care, Flo has been able to take several steps on her own which has shown great promises for her future. Flo will be spending the rest of her recovery time in the home of an RSPCA fosterer until she is well enough to go to her new home in Lincolnshire.

Me & My Pet: Tessa Packard

This week we chat to top jewellery designer, Tessa Packard, about life with her adorable Miniature wire-haired Dachshund, Smartie, and why she makes work such a happy place. Tessa creates gorgeous original pieces inspired by her travels to far-flung parts, with storytelling at its heart. We love her new explorer pendants as well as her […]

Why you should feed your Poodle ROYAL CANIN ®

Discover all the health benefits of ROYAL CANIN ®’s new wet dog food for your Poodle.