Meet Harley the Bulldog and Tigger the Kitten, who are best of friends. 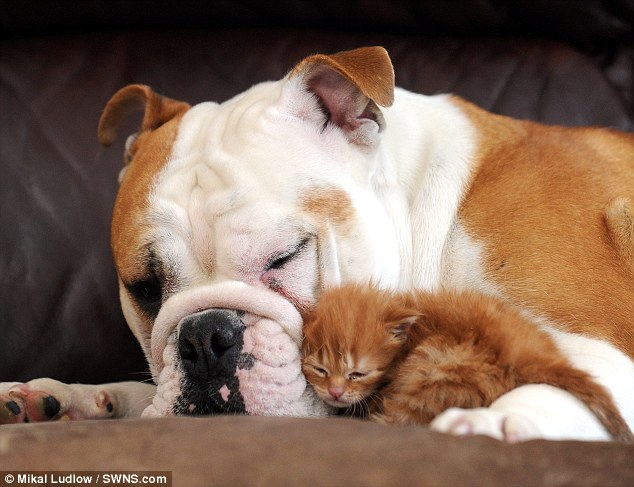 Orphaned kitten Tigger has found an unlikely surrogate mother in gorgeous Bulldog, Harley who is keeping a close eye on her tiny ginger friend.

The pairs unlikely bond blossomed when, two week-old Tigger was found abandoned in a church.

Tigger was handed in at Arvonia Vets in Cheltenham, Gloucestershire, where trainee nurse Clare Evans fell in love with him on the spot.

The 37 year-old who has three sons said: ‘From the moment I took Tigger back to mine, Harley completely tried to take over the care of him.

‘She washes him and lets him cuddle up, and now she’s producing milk and feeding him.

‘She can be quite a moody so-and-so and I never thought she would be this way with him.’

‘Whenever Harley is around, Tigger buries himself into her flaps of skin to keep warm.

Harley even stands in the way of Clare’s other dogs – a male Mastiff called Yogi and Kya and female German Shepherd.

Although Tigger will be moving into her new home shortly, the pair are set to keep their bond for life.

‘We thought it would be too distressing to separate them completely and my boys were quite taken and didn’t want to lose him either.

‘They are thrilled nan and granddad have decided to take them in.’

Holidaying with your dog – cottages, campfires or country houses?

Cottages, Campfires and Country Houses – which is right for your dog-friendly holiday?   When it comes to taking your four-legged friend on holiday there has never been more choice. And if you’re heading off into the UK’s lush and verdant countryside, it’s the perfect opportunity to take your dog away with you. That’s where […]