When animal photographer Gerrard Gethings isn’t behind the camera capturing the human likenesses of dogs, he can be found snapping pictures of his eight month old son, Jarvis and his loyal companion, Baxter the Border Terrier. As his first Father’s Day approaches Gerrard reveals the special bond Baxter has developed with Jarvis and how a walk without a dog is an empty kind of walk. 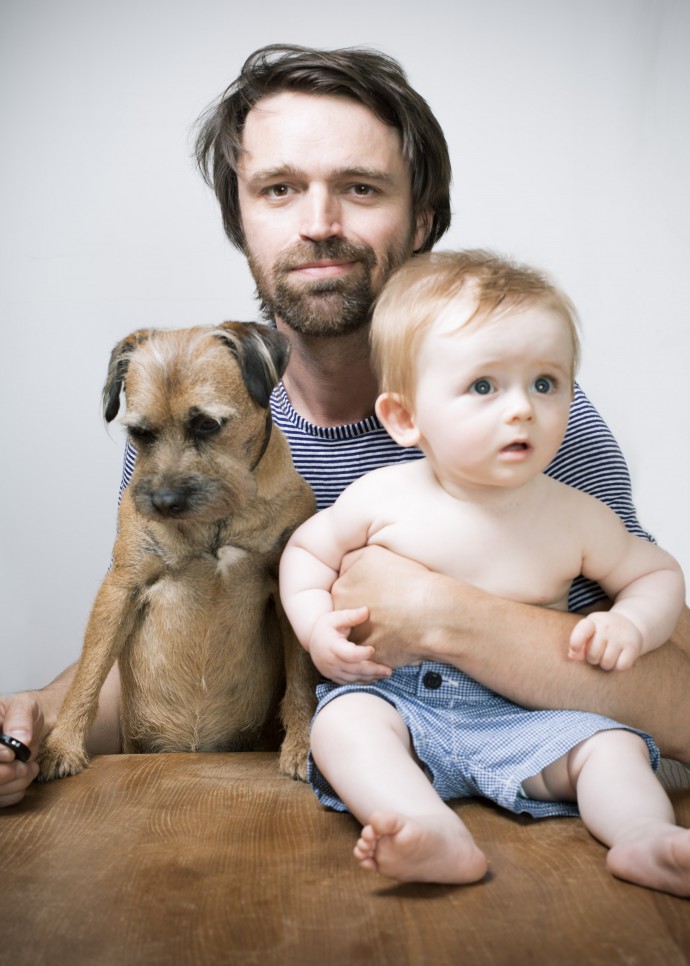 At the moment it’s all dogs. Since the Company of Dogs exhibition (a collaboration between Gerrard and PetsPyjamas to raise money for Dogs Trust) I have been working pretty solidly on commissions. I love working with dogs. I am very comfortable with them and they are (almost) always fun shoots. I’m also planning a series of work involving birds. I’ve shot a lot of birds and the unpredictability is really exciting. They will be shot in flight using flash, in a way I don’t think I’ve seen before. It’s an amazing amount of fun to get birds to fly into the exact area that’s been lit. Tricky too. Another planned series will involve horses. I don’t know anything about horses and I expect this will represent a whole bunch of challenges.

What breed is Baxter and why did you choose him?

Baxter is a Border Terrier. They are small, robust and full of character. This sounds more like a fine wine but I think it’s a fair description. They are the prefect breed for the city and will switch instantly to country dog on a weekend away. I cannot extol the virtues of Borders highly enough. Baxter is like a little old man who can run fast. He is enthusiastic and often hilarious. It was he who chose me to be honest. It’s a cliché I know but he made such an enormous fuss I just couldn’t ignore him. He’s always worn his heart on his sleeve.

How do your friends get on with your Baxter?

My friends adore Baxter. They often borrow him for the day. They take him for walks to Hampstead or around the shops. He is taken to the pub too which is a real favourite. A huge, warm room filled with enthusiastic, generous people with crisps. When we go on holiday friends are practically fighting over who gets to look after him. A kennel has never been an issue. This is a good thing as Baxter is rather needy and would probably have a breakdown, or at least an embarrassing episode. 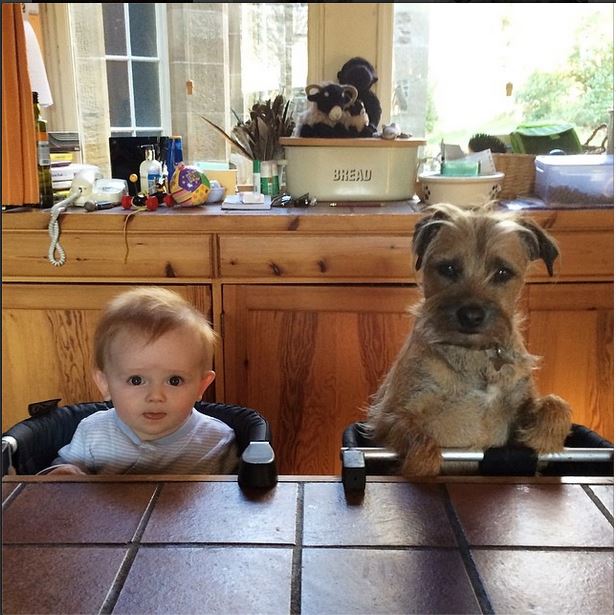 How long have you had Baxter?

I’ve had Baxter for 6 years. I picked him up at 7 weeks and he has shown no signs of wanting to move out ever since.

Does Baxter come with you to work?

Baxter comes to work with me whenever possible. This is pretty much always. I’m surprised by how welcome he is wherever we go. People often seem genuinely disappointed if he isn’t around. He is useful too. I have shot people over the years that could be described as difficult. Having a dog around can often make a huge difference to people’s behaviour. A common love of dogs will really break down the barriers. 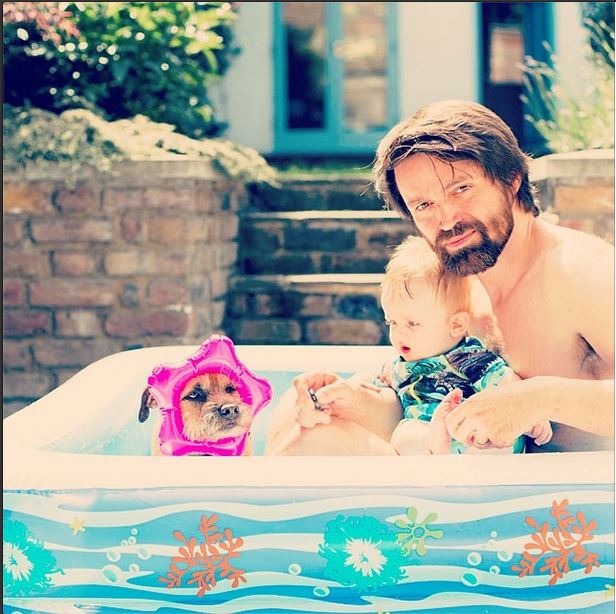 What difference does Baxter make to your life?

He is a constant, enthusiastic companion. Always positive and eager to be wherever I am. Quite simply, he makes everything in my life better. He requires very little in return. Simply all of my love, time, food, a chauffeur, unrestricted access to all of my son’s toys, frequent weekends in the country, Egyptian cotton sheets and a box-sprung mattress.

Do you take Baxter on holiday with you and if so where?

We go to Watergate Bay in Cornwall every year. It was the first place I went to with my wife before we had Baxter. It is utterly dog friendly and the beach is Baxter’s favourite place on earth. We go away to other places in this country too but always check whether or not they are dog friendly. Apart from foreign travel I wouldn’t go anywhere I couldn’t take Baxter. It wouldn’t be as much fun. I like to go for walks on holiday and I find a walk without a dog is sort of empty. 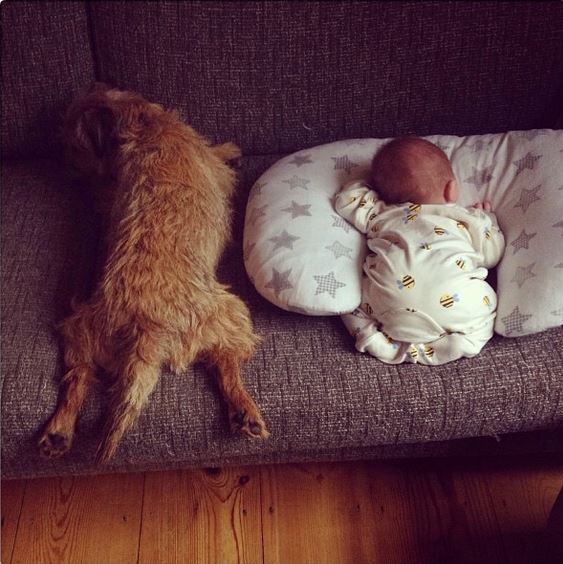 Does he have any funny ways or any funny incidents involving Baxter?

Everything about Baxter is mildly amusing. I love how expressive his face is. He seems to consider everything that I say with a tilt of the head. Like his namesake, Ron Burgundy’s dog in Anchorman, “he is so wise.” His cool demeanor leaves him instantly however at the mere mention of his girlfriend, Scrappy. She is a border too and has known Baxter since they were pups. He stays with her when we go on the big summer holiday and when I pick him up to go home they hide under the table. It’s a real love story. I think if one of them had a job they would probably get a place together. I wouldn’t mind as long as it was nearby.

Do you take Baxter with you to restaurants or pubs? And do you have any favourites?

All the time. Homa in Stoke Newington for breakfast, The Rose and Crown (also Stoke Newington) for Guinness and Mare and Beck in Hackney is great too. Baxter was recently instagrammed there doing a stint behind the bar. I find that a lot of cafes are becoming more dog friendly. I suppose they have to be. Where I live it seems everyone has a dog and/or a baby. The cafes would be empty if one or the other were banned. I love these places where there are dogs and babies hanging out together. The parents trying to pacify one or the other and simultaneously conduct an adult conversation – it’s a real skill. 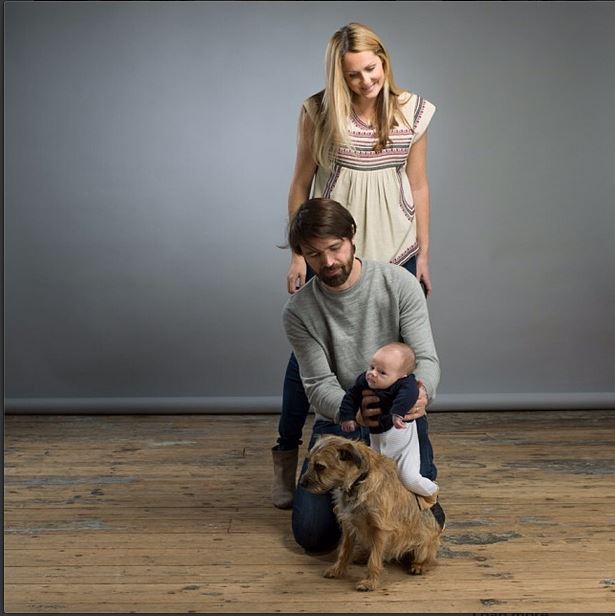 He exercises every day in Clissold Park, Stoke Newington. At the weekend we go to Hampstead Heath. Other favourites include Hyde Park, Richmond park and absolutely anywhere with sand. I don’t know what it is about sand but it sends Baxter crazy. Like Catnip to a cat. He completely loses it, but in a very charming way. He will bury his own head and then tear off down the beach, barking and wagging his tail. It’s quite something to see. At times like this I am reminded that it is me who is the brains in our relationship.

What kind of relationship does Baxter and Jarvis have?

They are hilarious together. Baxter follows him around. He will sit next to him even though Jarvis is at the age where he enjoys inflicting mild discomfort. Jarvis will pull out a sprig of hair from Baxter’s tail and then jam it into his own mouth. I have to be really vigilant. I caught him trying to suck Baxter’s paw recently. Despite Jarvis’s wanton hooliganism, Baxter does seem genuinely fond of him. He could walk away but never does. He is so patient with the little guy. I really look forward to watching them grow up together. We had a Jack Russell called Suzy when I was a boy; I loved that dog, and I know that Jarvis will feel exactly the same about Baxter. It’s the perfect combination. A boy and his dog. The photo opportunities are amazing too. 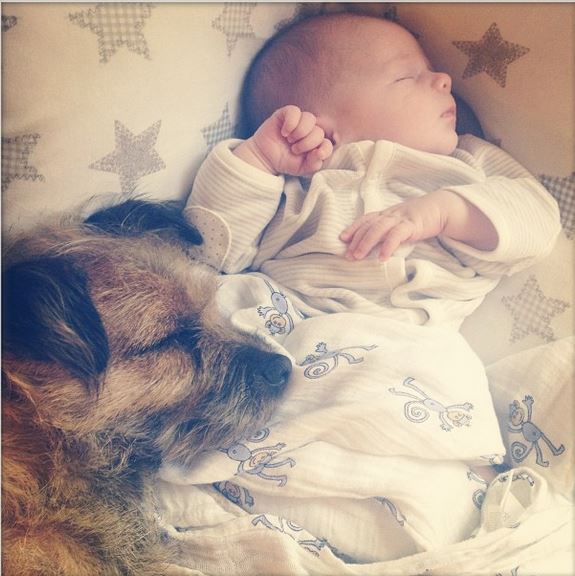 Dog behaviourist and trainer Louise Glazebrook has released her debut book that gives advice on how to raise a dog in the city.

The island where cats rule

Off the coast of Fukuoka, Japan, is a tiny little island where semi-feral cats seem to have taken over.