Another day, another reunion for the Terriers 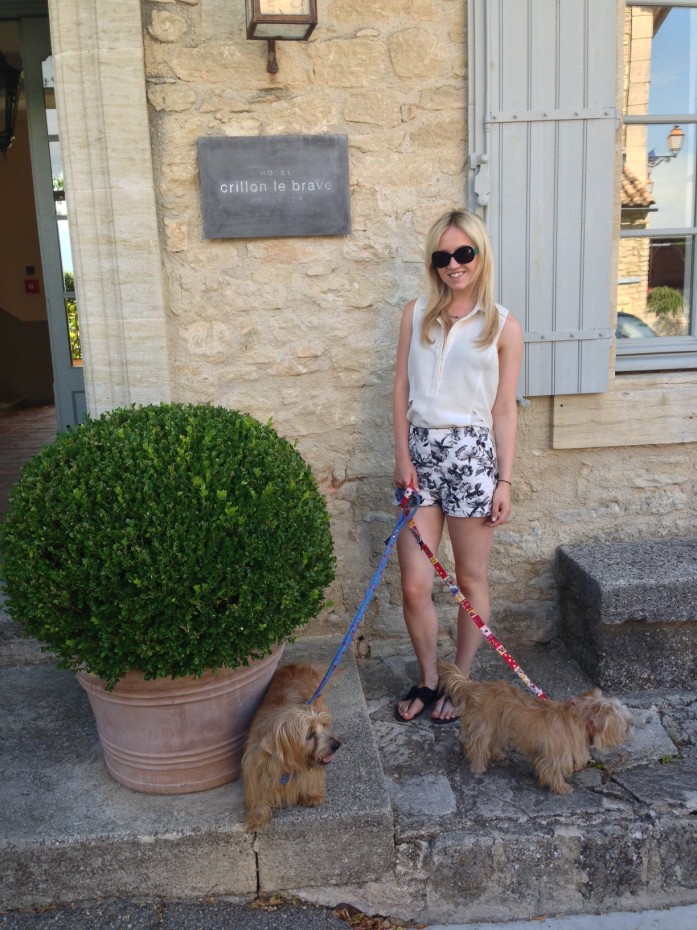 Camilla with Rufus and Heidi outside the Hôtel Crillon-le-Brave

After the reunion between Rufus and his old friend John at the Moulin de Salazar on day 3, there is another surprise for the Norfolk Terrier and his sister Heidi on arrival at Hôtel Crillon-le-Brave – Denise’s daughter Camilla is waiting there for them, and lots of tail-wagging ensues…

The hotel, made up of several adjoining houses, sits atop (or almost – the church is at the very top) the medieval hill town of Crillon-le-Brave, which acquired the “le-Brave” bit of its name to honour its 16th century duke Louis des Balbes de Berton de Crillon, also known as “Le Brave Crillon” for his military exploits on behalf of Henri IV.

The house we are staying in is the Maison Ventoux, overlooking Mont Ventoux, the “Géant de Provence” – and the scene a couple of weeks ago of another stage victory by British Tour de France winner Chris Froome.

It’s a surprise to find that 60 years ago this pretty village – which is now clearly thriving – was in ruins and abandoned. Alex, the housekeeper in Maison Ventoux, tells us that her grandfather was one of the first to return to Crillon in the 1950s to repair Crillon and bring it gradually back to life.

On arrival in Crillon-le-Brave, Rufus and Heidi changed into their smart new Provençal collars, leads and bandanas made by Creature Clothes.

After a late meal in the hotel’s restaurant (with the dogs under the table) and a very good night’s sleep in our spacious suite, we spend our second day here relaxing by the pool before heading out to nearby Carpentras for dinner at the excellent Chez Serge.

On our third day we end up on a mini-tour of Provence, taking in the top of Mont Ventoux (calling in at Chalet Reynard on the way for a drink, along with dozens of cyclists tackling the mountain) as well as a couple of Provençal recommendations from PetsPyjamas followers: L’Isle-sur-la-Sorgue and Roussillon.

In L’Isle-sur-la-Sorgue, recommended by Leo Haynes, the temperature was almost 40 degrees. Rufus had a swim in the river to cool off (and Heidi, not so keen on the water, had a paddle). After that, their cooling coats helped them to beat the heat while we had a very nice salad lunch at Le Café de la Sorgue.

As well as pretty waterwheels and some lovely houses, the town also has many antique shops. As Denise and Camilla were browsing in one of these, Heidi quietly and unexpectedly left an embarrassing “present” outside the shop’s doorway. As we apologised and said we’d clear it up, the owner of the shop waved her arms around, said: “It’s no problem… in France it is good luck!”, and offered to clean it up herself. We declined her kind offer, pulled out a plastic bag, and left the doorway as spotless as when we arrived.

Just after that demonstration of just how much dogs are welcome almost anywhere in France, we had our first rejection of the trip: we attempted to take the dogs into a modern art gallery and were told that animals were not allowed (although the rejection was delivered with an apology).

In Roussillon, recommended by @wireysausagedog via Twitter, we saw amazingly colourful and beautiful formations of ochre rock and a very nice cafe with very quick service – unusual for France – where we stopped for a drink. Then it was back to the hotel for an hour or two by the pool before dinner.

Now it’s departure day, and we’re leaving not just Provence but France, and heading for Italy, via Switzerland. We had been intending, before we left, to follow another tip from Leo Haynes – “we never leave Provence without buying some wine from Chateau Pesquié” – but we discover that the chateau, and most of the many other roadside wineries in Provence, are closed on Sundays, so our plans to pick up a case or two were frustrated…

• Have you got any suggestions for what Rufus & Heidi (and Denise & Rory) should do in Italy? Tweet us your travel tips @PetsPyjamas with the hashtag #PPJterriersontour for a chance to win £250 to spend on you and your pet on PetsPyjamas.com (click here for more details and terms & conditions). 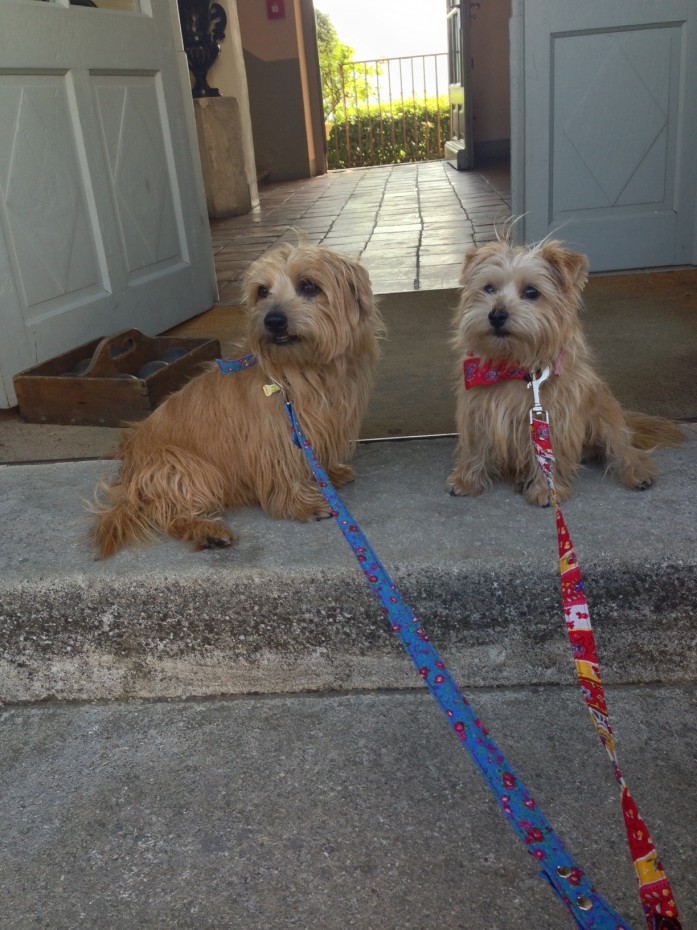 Rufus and Heidi in their Provençal collars, leads and bandanas

Don’t break the bank: Top three pet-friendly hotels all under £100

The Pet Inspectors Rufus and Heidi live like royalty during their stay at Cliveden House Hotel, enjoying long walks and their own doggie beds and treats.

This year marks the first year of our PetsPyjamas Travel Awards – and we are thrilled to finally announce the winners from our 12 categories!