Crufts 2013 began on Thursday and in the spirit of all things champion, we chat to the owner of last year’s winner, Margaret Anderson about her champ Lhasa Apso, Zentarr Elizabeth. Beating off stiff competition from more than 21,000 dogs to be Crowned Best In Show 2012, Zentarr Elizabeth, also known as Elizabeth, loves sirloin steak (medium to rare, thank you very much) and enjoys twice weekly shampoo and blow-drying sessions. 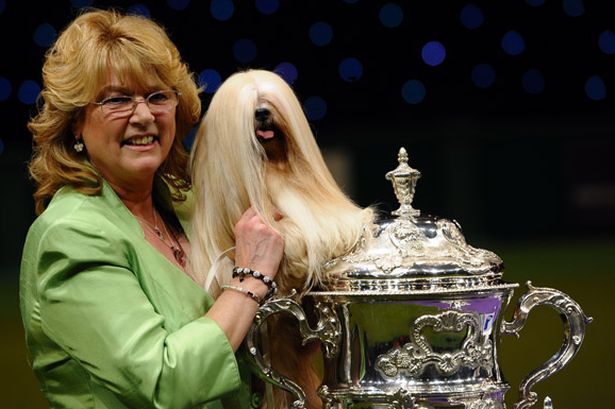 The past year must have been jam-packed for you and Elizabeth – what have been your highlights?

After Elizabeth won Crufts we have been extremely busy appearing on TV, opening events and being interviewed. We have been in quite a few magazines and newspapers such as The Daily Mail, we were even invited on Britain’s Got Talent but I said no as I thought Simon (Cowell) would get bored as Elizabeth’s talent is to walk beautifully and look pretty.

Do you and Elizabeth get recognised?

Yes and especially straight after Crufts we got a lot of attention from people who recognised us. I went into my local bank a couple of days after we won and the lady behind the counter recognised us straight away.

Elizabeth clearly loves being in the limelight, has she always loved the attention?

She adores the attention and the applause. Elizabeth came third in the Eukanuba World Challenge last year which was held in Orlando and the crowd there was so loud and so enthusiastic that I was a little worried how Elizabeth would react but she loved it.

What is your favourite part about competing?

Crufts is the biggest dog show and I just love the whole atmosphere. You do get to know other breeders but some people can be very competitive, some a little over the top and I am not like that. For me it is about showing my dog, showing off that she is a nice specimen and for me the most important thing is that she is enjoying herself and is happy. There is no point showing an unhappy dog as they won’t perform well. So, they have to like the attention and enjoy showing.

Have you always loved dogs?

I have loved dogs all my life. My parents brought me a poodle for my 9th birthday and even then I would take it to training classes. Later on I worked in a Zoo and really I should have become a vet because of my love of animals but then I guess I wouldn’t have had time to show, which I have been doing for over 30 years.

If you could make one thing statutory for all dog owners what would it be?

I think training is the key element that all new owners should do before they invest in a dog. Potential new owners also need to really research the dog they want and if it would suit their lifestyles; I think a lot of people don’t look into the responsibilities of certain breeds. For instance, Elizabeth’s coat takes me hours of work to look the way it does, so owning a Lhasa Apso isn’t for someone who doesn’t have a lot of time. Also, I never sell puppies to anyone who works all day away from home as I think owners need to be there to look after the dog all the time, otherwise it isn’t fair.

How many dogs do you own?

We have 20 dogs, four other Lhasa Apsos, including Elizabeth’s mother and pack of Pomeranians, all of which are already champions or champions in the making.

For the first time this year Crufts has created a competition specifically for mongrels and crossbreeds, what do you think about this?

All dogs have a place but when Mr Crufts started the show it was created for pedigrees and I think it should continue to be that way.

How do you spoil Elizabeth?

Well, she loves steak and so I will often cut it up into little pieces and have it in my pocket when I am showing. Elizabeth would show even if I didn’t have the steak but it is a lovely treat for her which I know she loves.

Margaret will be at Crufts this year and will be presented with a portrait of Elizabeth in the main arena, as well as being on the Eukanuba stand in Hall 3, where you can meet Elizabeth and chat to Margaret.

Why I love… Jack Russells

Find out all about why Jack Russels make perfect little companions.

Paws with Opulence’s Simone Taylor on launching her brand for pampered pets!

New portrait of Queen and her Corgis

Having own over 30 Corgis during her reign, it is no surprise this new portrait of Her Majesty the Queen features her favourite breed!