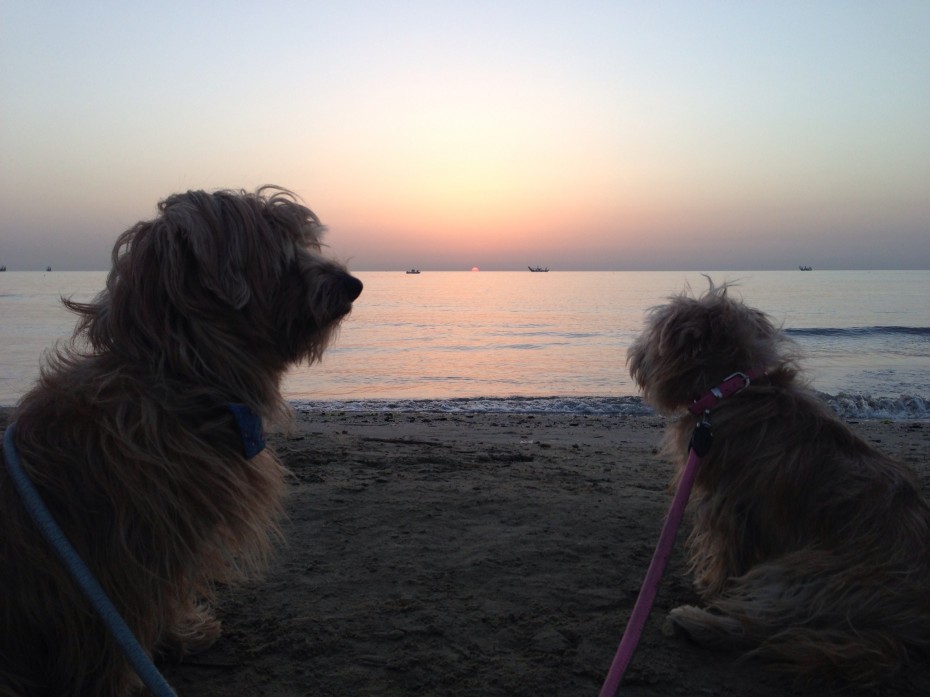 We reluctantly depart the white hilltop city of Ostuni and set off, heading north towards the Gargano Peninsula – a less well-known bit of Puglia (among the British, least) fairly undiscovered area on the coastline including a national park. On the way we call at Taverna da Santos, which reflects the region’s Greek heritage in its excellent menu and in its pretty decor in blue and white. Next to it is Santos Bau Beach, which is described on the restaurant’s sign as the top animal-friendly lido in southern Italy.

There are dogs at almost every table in the restaurant – Labradors, a Schnauzer, a Jack Russell and the owner’s beautiful Golden Retriever. Everyone makes a fuss of Rufus and Heidi, who lap up the attention. We also chat to a Milanese lady, who tells us that we simply must come to Sicily, where she now lives, for the best beaches and the best Italian food.

After a delicious moussaka lunch we are back on the coastal road, and after passing through a string of what seem from the car to be unprepossessing resort towns we reach the Gargano national park, driving along a winding road around the edge of it to get to Vieste. We had a campsite in mind but it’s a bit late when we get there and we feel a bit too tired to pitch our tent, so instead we find Il Castellino, a charming inexpensive hotel right outside the too-busy town centre and on the seafront. The dogs love it – especially the powerful air conditioning – and after a quick chill-out session we head for dinner at the beachside fish restaurant just across the road.

As we enter the restaurant we ask if it’s OK to bring the dogs in, and hear a phrase that’s been cropping up regularly in recent days: “Due cani? Va bene!” The place is full of Italians who seem to know just what to order, and we have a delicious fish platter and a litre each of wine and water for a total bill of €27.

Next morning we head for the hotel’s private beach, just across the road, where we take Rufus and Heidi for a paddle. It’s no surprise when Rufus wades further in and starts swimming, but it is when Heidi does – as she has never swum before, always seeming reluctant to enter the water beyond belly height. Now she seems to love swimming as much as Rufus does. We leave the beach before it gets too hot, and plan to head for San Benedetto del Tronto or beyond – we were told at the hotel in Ostuni that the coastline is beautiful between there and Ancona.

But on the way we decide to make a detour to San Giovanni Rotondo, the home of Padre Pio – now officially Saint Pio (Pius) of Pietrelcina, since he was canonised by Pope John Paul II in 2002 – from 1916 to 1968 and a growing pilgrimage site. The builders’ cranes all across town are witness to the pulling power of a new saint.

On the way to up to San Giovanni Rotondo there is a lovely drive through the Gargano national park’s shady forest, passing lots of rests stops where people get out of their cars for walks along marked paths. As we pass through the cool shade of the trees, suddenly we are driving through clouds of butterflies. We stop to take a picture, but they are just too quick to catch in a photo. After a another very quick stop in San Giovanni Rotondo while Rory has a look at the Padre Pio pilgrimage church – designed by Renzo Piano, the architect behind London’s tallest building, the Shard – we are on the road again, heading for the coast to San Benedetto.

Rufus and Heidi have adapted well to all the driving. They just like bring with us, and we are careful to offer them plenty of water, keep them in their Cool Dog coats, and spritz them from our
water spray bottles. They drift off to sleep again almost as soon as we begin our three-hour drive…

After finding a pet-friendly place to stay just near the beach, Hotel La Palazzina, we pop to the beachside restaurant Bacio dell’Onda just across the road to share a superb range of seafood starters for €30 – it’s quite enough for the two of us, and some of the best seafood we’ve ever eaten.

After an early night, it’s an early start for Rufus and Heidi, who go out for breakfast, an early walk and to watch the sunrise from the beach with Rory, before we check out yet again and head north to Verona…

• What should the Terriers on Tour do and where should they go as they head north and back towards London in the last six days of their three-week trip around Europe? What are the best pet-friendly places in Verona? Where should they visit between Verona and Calais? Follow us on Twitter @PetsPyjamas and @rufusandheidi and tweet your travel tips with the hashtag #PPJterriersontour – or email them to denise@petspyjamas.com – for a chance to win £250 to spend on you and your pet on PetsPyjamas.com (click here for more details and terms & conditions). See the map below for where we’ve stayed so far… 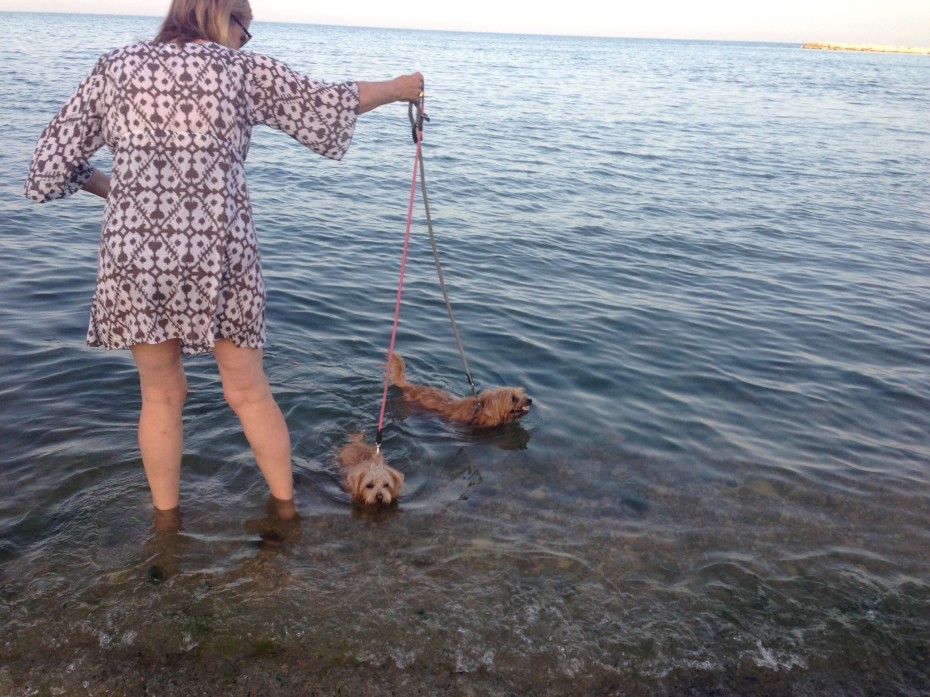 Heidi enjoys her first-ever swim (along with Rufus).

Getting ready for the festive season, PetsPyjamas’ mascots Rufus and Heidi visit the luxury Pet Spa at Harrods. Rufus reveals all…

Reasons To Book With PetsPyjamas