It is believed that Rupee the rescue dog is the first canine to make it to the base camp of Mount Everest at 17,000 feet. 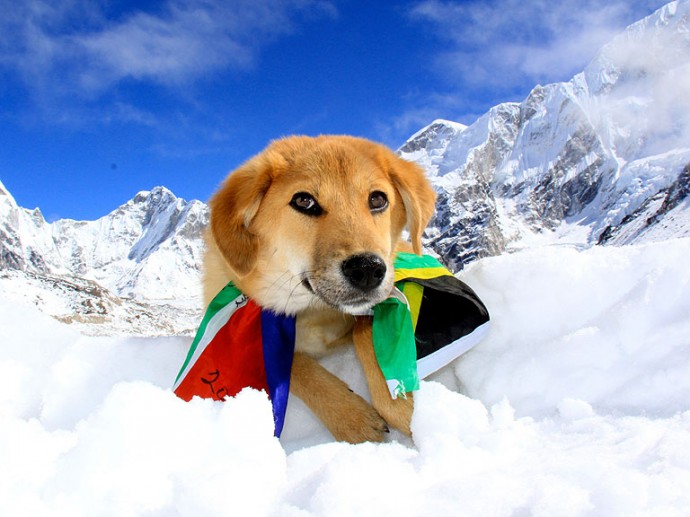 The once homeless dog was rescued by Joanne Lefson from a dump in North India. Lefson, an animal activist, has described Rupee as being severely malnourished and dehydrated when he was discovered.

“When I saw him on that dump-site, he couldn’t have had more than an hour to live. He couldn’t even walk 10 meters without collapsing,” she said in the U.K.’s Daily Mail.

Rupee was in good hands, and the 8-month-old puppy was given a high-protein diet to encourage a fast recovery. Once Rupee was back in full health, Lefson decided he would be well suited to the Everest climb that she had planned to take with her dog Oscar before he sadly passed away earlier in the year. After checking with a highly trained vet that Rupee was ready for the trip, Lefson was given the all clear and embarked on the hike of a lifetime.

Rupee is the first Mountaineer dog to climb the 17,000 feet, but it wasn’t all hard work – Lefson told reporters of how much fun Rupee had playing in the snow.

Fancy felines, Tigger and Nala, head to the beautiful Scottish borders for a weekend of walks and delicious food.

7 steps to adopting a cat

We chat to The Mayhew Animal Home to find out their seven essential tips to responsibly adopting a cat or kitten.