Home at last! Terriers on Tour in numbers 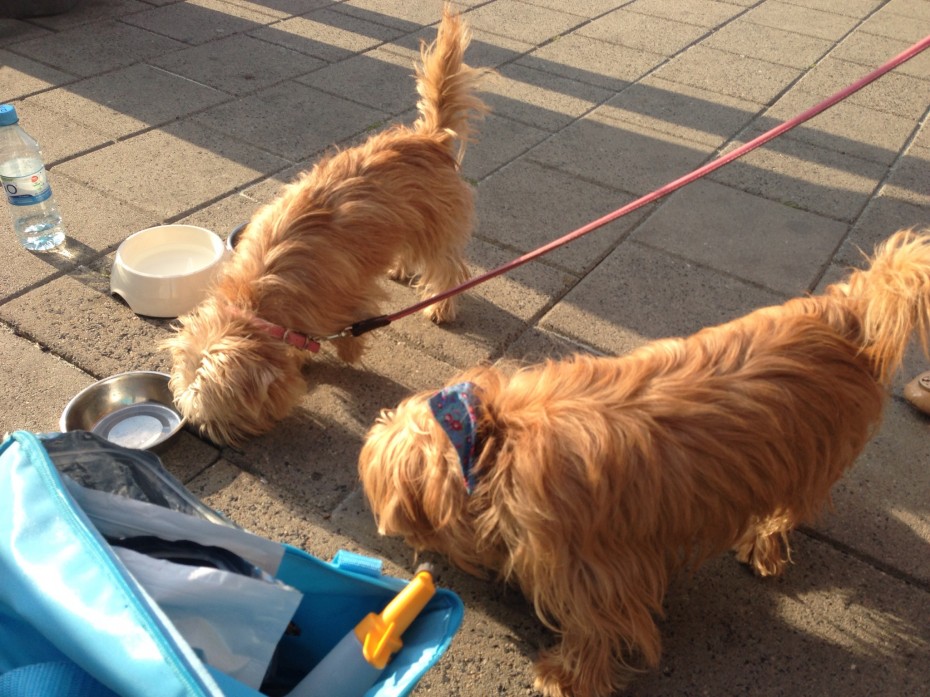 Well, the Terriers on Tour European road trip is finally over: after 23 days travelling around the continent, PetsPyjamas mascots Rufus and Heidi are back home in London.
The trip was a great success – the dogs loved (almost) every minute of it, and we in the Terriers on Tour road crew (Denise and Rory) enjoyed it just as much.
However, there’s not really much to say about the last day of the trip, as – after our departure from Berlin was delayed by tyre troubles – it was just a day-long dash from Berlin to home, starting at 11am and ending at half past midnight, with a few stops at motorway service stations for fuel, food, drink and dog-walks (short ones).
So, instead of an account of that journey, here’s a summary of their three-and-a-bit weeks on the road on the continent in numbers:
4,968
miles covered by the Terriers on Tour car (see a map of the places we stayed along the way here).
2

car tyres replaced (both punctured by screws, probably somewhere on the Autobahn).

countries “visited” without leaving the motorway (Austria, the Netherlands and Belgium).

1
country “visited” without even stopping the car (Austria – there was an Alpine storm going on).
1

stop on the motorway to shelter the car under a bridge during a hailstorm (on the way to see Rufus Wainwright perform in Verbier).

7
mosquito bites suffered by Denise and Rory.
7,352
bugs splatted on the front of the roofbox (approximately).
3
nights spent in tents (including one in our emergency spare two-berth pop-up tent from which Rufus escaped, and two in our big five-berth family tent, from which he didn’t, in Baveno, in Piedmont, northern Italy, and Camping River in the Cinque Terre a little further down Italy’s west coast).
11
nights spent in five-star hotels (one at Le Meurice, Paris, three at Hôtel Crillon-le-Brave in Provence, one at Villa Laetitia in Rome, three at La Sommità, Ostuni, and three at Schlosshotel im Grunewald, Berlin).
8
nights spent in accommodation somewhere between a five-star hotel and a tent (Moulin de Salazar in south-west France; with friends in Montreux; at Hotel Bellagio by Lake Como; in a motel-style room on a campsite in Pompeii; Hotel Castellino in Vieste; Hotel La Palazzina in San Benedetto del Tronto; a B&B in Verona, and a Ramada hotel in Bayreuth).
2
chats with fellow terrier owners (once in Italy when we met a young couple also heading north back from Puglia with their Border Terrier, and once in Berlin when we were stopped by a Norfolk Terrier owner).
6
swims by Rufus (at Moulin de Salazar, L’Isle-sur-la-Sorgue, Vieste, Lake Garda, and Grunewaldsee in Berlin twice).
1
swim by Heidi (her first-ever, at Vieste, and she enjoyed a good deep paddle many more times).
17
times we heard Get Lucky by Daft Punk on the radio (six times in France, seven in Italy, once in Switzerland, three times in Germany).

2 week fitness plan for you and your dog

Personal Trainer Amanda Wilkinson reveals to PetsPyjamas how you and your dog can motivate each other to get fit.

Lively pup Alice desperately needed a pacemaker fitted after she was diagnosed with a deadly heart defect.

26 year old teacher Elise Dixie raised £3,000 to fly a poorly stray dog over to the UK from Cambodia.