We speak to one of London’s most-loved retailers and founder of Chelsea Dog Day, Mr. Trevor Pickett, about his Lurcher Chino. Trevor Pickett’s iconic shop in Burlington Arcade has been the quintessential English provider of luxury leather for an incredible 25 years and is also where Chino goes to work each day.  After an extraordinarily successful Chelsea Dog Day last year, we are very excited to be part of the event again this summer. 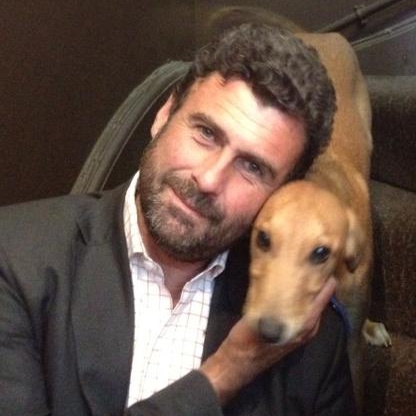 At the moment I’m making plans to change my business model, which is very exciting after 25 years – we are now looking to the next 25! There’s also lots of charity work – for me it’s a little bit like a hamsters wheel – there’s always something going on all year round! After Dog Day this week we go into Burlington Bazaar (with the Designer Decorator Pantomime in between!) – which is in aid of Ormiston, the family support charity. The Bazaar is an exotic Christmas market which we have grown over three years – we are especially excited this year as we have made lots of changes, freshened it up and given it a new dynamic and direction.

Tell us about the Chelsea Harbour Dog Day?

I created this event 14 years ago in aid of Macmillan cancer relief. It started as a dog show at Royal Hospital which I chaired for 6 years. It was a huge success but I think charity events can easily run out of steam and lack lustre, so after a break I resurrected it with the energy of Claire German and team at Design Centre Chelsea Harbour. Last year was the first time at The Design Centre and it was a triumph – the concept was initially really meant to be for children but there seems to be a broader appeal and brings out the child in all of us – just traditional simple fun. The feel we try to achieve is ‘traditional village fete’ – think strawberries and cream, straw bales, homemade cakes, afternoon tea in cricket pavilions or the local tennis club tournament with a bowling green backdrop!

He is a Lurcher called Chino and is slightly bigger than the previous bitch that I had called Teasle. Chino shares the same loving calm sweet character that Teasle had, wishing to be with you and please all the time – always generous with their love! They are very happy in everyone’s company but do choose their favourites who will get a very enthusiastic welcome with a bit of jumping up – strangers might get the same but with a bit of a bark and a wagging tail.

How do your friends get on with Chino?

They love him – well apart from Christmas at 9 months when he bounded into the drawing room with exuberance straight onto sofas and the gifts causing the raising of an eye brow by my host, Tim, who has two impeccably trained dogs! This distain was also reflected by my best friend James who renamed him Chico and put him into a kennel when Chino was out of my sight! Thank goodness my two year old goddaughter (James’ daughter) has fallen in love him and is almost keener on him than me so Chino is now allowed on the bed at the house at Christmas!

Since he was three months on the 2nd day of the Olympics. He was at Ascot for a Batterse Dogs & Cats Home awareness – I previously said no to having a dog to 3 people who had recently tried to persuade me that I needed a four legged friend, but when I saw Chino that day I didn’t even need to stroke him before telling the BDCH that I would take him that night! This was not BDCH policy but as I was a guest of the chief executive and all the questions of suitability were 10 out of 10 (lives in a walled garden, would not generally be left at home, I had a dog before of this breed, intended to neuter him etc) I was given special permission to break their rules and left with a dog, his cage, food and lead at 4pm! That was a bit naughty to pull rank but at least another dog was homed and since then I have worked and supported Battersea. We have a ‘dog of the month’ on our newsletter and a frame in our shop window with ‘Chino’s choice’ of the month for dogs needing re-homing from Battersea. 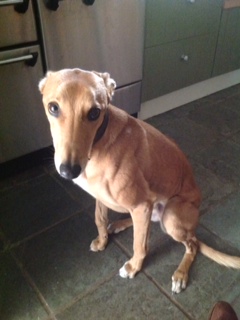 Yes he is with me everywhere – dogs are not allowed in cinema, theatre, and restaurants so these are the only places he cant go, unless he is on holiday in Europe where the rules for dogs are more relaxed.

He is fairly good and chills out quite happily in the office. Teasle always used to lay upside down on the return of the stairs, was a pain to climb over and completely ignored customers. Chino gets a few walks in the day by staff as he’s a perfect foil for a fag or phone session! He often has evenings in the office when I am out in the West End so he’s very relaxed at work.

Apart from being a perfect bed partner! My only difference is remembering to plan him into my schedule when I’m away and not able to take him, but think I am almost on top of that problem as I have a great support team. He is otherwise with me at all times and he is not an inconvenience. Although one thing I can’t do is pop into shops on my way to work with him. Picking up a pint of milk at the supermarket or toothpaste from Boots is a pain but we can deal with that!

Only to Europe when we are staying at people’s homes for a two week period and driving there.

Does he have any funny ways/ any funny incidents involving your dog?

He did once, as a pup, chase out the park with another dog and got all the way to Bond Street! His other trick is to exhaust himself so with no warning collapses on the ground, will not move and pants so any new walker inevitably calls to say he has had a heart attack not realizing that he is a sprinter and not a marathon runner! Then he refuses water for at least an hour while he pants like mad with his tongue fully extended so quite frightening for anyone not used to him!

In taxis and buses he likes to get his bottom on the edge of the seats and then sits with his forelegs on the ground which amuses onlookers!

I am very pro Battersea Dogs & Cats Home, Canine Partners and Dogs Trust. I have a soft spot for the poor Staffies of this world – which is where Battersea are so good with those type of dogs that, for unfair reasons, have a reputation they don’t deserve.

Do you take them with you to restaurants/ pubs/ cafes? Any favourites?

Yes he goes wherever he is welcome, in Suffolk he loves The Station pub in Framingham which at Saturday lunch is very canine prevalent.

Green Park is his London stamping ground, he is very easy to exercise with the ball thrower if there are no other canine friends or squirrels to chase! Without either of these items to let off steam with it would be a slow crawl trying to find sandwiches and checking every bin he possibly can instead. In Suffolk he loves everywhere he goes and we have lots of friends with parkland or farm land and fields by the house so it’s a doddle.

PetsPyjamas is sponsoring Best in Show at Dog Day, which will be taking place at Chelsea Harbour on 2.07.14 from 4.30 – 7.30 pm. Come and say hi to us! Click here for more information.

A massive animal lover and owner of five dogs, Joss Stone was joined by one of her pooches Maggie during an interview on Loose Women.

An ex-fight dog from Afghanistan has made it through to the semi-finals of Scruffts after being rescued by Nowzad vets.