In Italy, life’s a beach (but not for dogs) 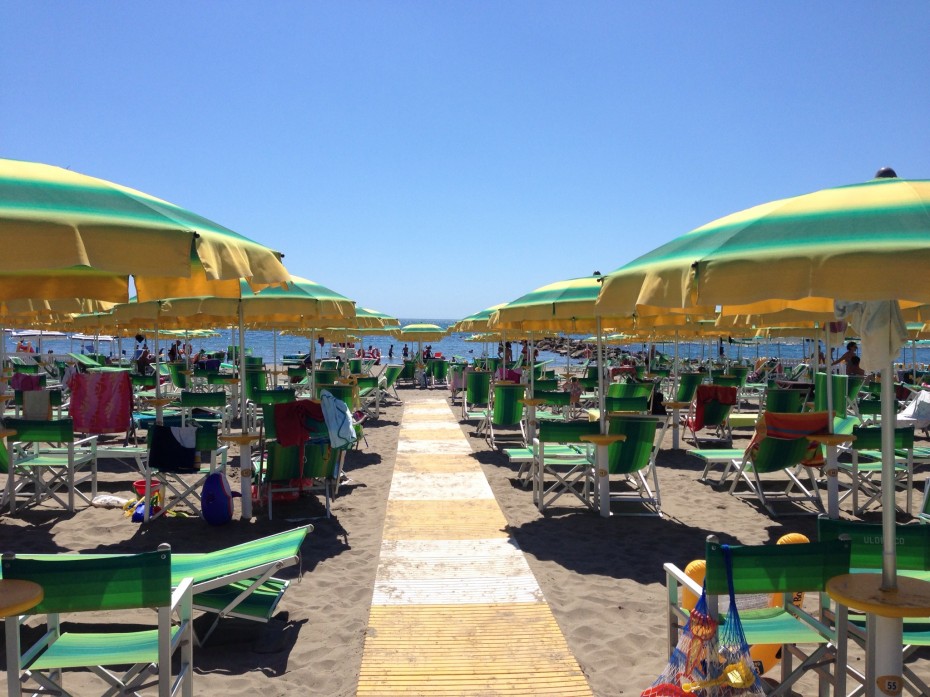 A beach club at Marina di Massa, Tuscany … where unfortunately dogs were not allowed.

“I’m sorry… there are only three beaches in Italy where you can take a dog,” says the waiter at the very stylish Versiliana Beach Club at Marina di Pietrasanta, just next door to the swanky seaside resort of Forte dei Marni. “The nearest one is 200 kilometres away, near Grosseto.”

This is a major disappointment as we’d been driving along the beautiful coastline of northern Tuscany – a seemingly endless line of beach bars and restaurants along the golden strand – looking for a place to stop for a cooling dip in the sea with Rufus and Heidi.

The previous day we had driven from Bellagio by Lake Como down to the Ligurian coast, calling in at pretty Portofino, where Rufus and Heidi were able to paddle in the sea at the harbour, before driving south-east to Camping River. This large campsite has an open-air restaurant where the dogs joined us for our late dinner of delicious pizza. It’s near Bocca di Magra, a pretty harbour where there is a cool cocktail bar that has a dog as its logo, but it’s too hot to sit there for more than a few minutes with Rufus and Heidi.

What the waiter at the Versiliana Beach Club said turns out to be a slight exaggeration – Italy does have more than three beaches where dogs are welcome, and in fact there is a beach club called Dog Beach in San Vincenzo (a mere 100km away from Marina di Pietrasanta!), where mutts are most welcome – but by the time we reach that point on the coast the day has become too hot and we decide to stay in the cool air-conditioned car. 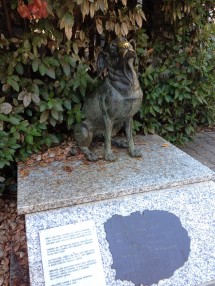 The statue of Pippo, the dog without a master, at Torre del Lago

Then, after the drive past the beaches of northern Tuscany, we call in at Torre del Lago to see Giacomo Puccini’s villa, where Rufus and Heidi pose with a statue of the great opera composer and we find a statue of the dog with the following inscription (in rough translation):

Pippo, a dog without a master, with a brown coat and golden eyes, filled with old sorrows and a newfound peace, lived for about 20 years on the Belvedere Puccini.
He appeared in 1977 with a deep gunshot wound on his back, but was able to forgive and retain confidence in men.
Adopted the inhabitants of the lake, he taught everyone, without extraordinary feats, the true meaning of goodness, forgiveness, friendship and freedom.
Imprisoned, like every mortal being, in the net of life and time, he was a testament to the magic of an existence fully lived with dignity and in harmony with one’s true nature.
A story of love and mutual gratitude between man and dog.
Torre del Lago Puccini, 8 December 2002

We make another quick stop at Pisa before making a last-minute decision to call ahead and book a room for the night at Villa Laetitia in Rome. 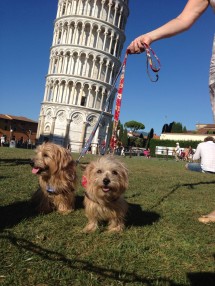 Rufus and Heidi in front of the leaning tower of Pisa

This small hotel – where, it turns out, the actress Sharon Stone was a recent guest – is owned by the fashion legend Anna Fendi, and unsurprisingly is one of the most stylish we have ever stayed in. We settle the dogs in our beautiful garden room before going for a very late 11pm dinner in the villa’s new restaurant, Enoteca La Torre.

As we enjoy the best dinner of the trip so far – starters of pork tempura served with anchovy ice cream and a dab of a subtle tomato confit, and ravioli with ricotta and chicken livers, and main courses of Tuscan lamb and Wagyu beef – we notice that Anna Fendi is sitting at the next table (there are only a few) having dinner with some other members of the Fendi family.

After a restful night, all four of us are introduced to Anna by her assistant. We have a brief chat (through an interpreter as her English and our Italian are not so good) and we tell her how much the dogs liked our cool, well-shaded room and the garden outside it; she says she hopes to see Rufus and Heidi back at the Villa Laetitia soon.

We then make a whistle-stop tour of Rome, taking in the Pantheon (outside which we find a great dog-friendly cafe called Night and Day), the Trevi fountain (from where a lovely dog-friendly taxi driver takes us back to our hotel, showing us pictures of his French bulldog, called Zeus, along the way), and the Colosseum. We then drive up to St Peter’s Square in the Vatican City before heading south to Pompeii.

After the luxury of the Villa Laetitia, it’s time for us to save some money by finding a campsite  again. The one nearest the excavated ruins of Pompeii is called Camping Zeus, and – thinking back to our Roman taxi driver and his dog – we take that as a good omen.

The campsite is just a few metres from the entrance to the ruins, and turns out to be the cheapest one we’ve found on the trip – just €20 to pitch a tent for the night. However, for the dogs’ comfort we decide to rent one of the site’s motel-type rooms with air conditioning for €80. It’s a big step down from the Villa Laetitia, but it’s comfortable.

The next day we start early, before the day gets too hot, and take Rufus and Heidi for a short stroll around the ruins (“Yes, of course,” the woman at the ticket office said when I asked whether dogs were allowed into the historic site.) They have their Cool Coats on, and there is plenty of shade and an air-conditioned cafe where we stop a few times to chill out. We also offer the dogs regular drinks and keep spraying them with cold water from our garden spray bottle to make sure they stay cool and well hydrated. 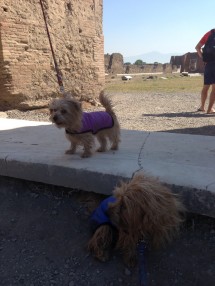 Rufus and Heidi find a nice breezy, shaded spot amid the ruins of Pompeii

We take a drive up the winding road to Vesuvius. Stopping at a restaurant for a cold drink halfway up, we come across a Danish family stranded on the volcano with their luggage – their hire car has broken down and been towed away to a garage in Naples, but the taxi that was meant to come and pick them up has not turned up.

We offer to take the father of the family down to Naples and drop him off at a taxi rank before leaving for our next stop,  in Puglia on the other side of Italy.

• Have you got any suggestions for what Rufus & Heidi (and Denise & Rory) should do in north-eastern Italy, where they’ll be heading on 6 August after leaving Puglia? Should they go to Ravenna or Rimini? Venice or Verona? Tweet us your travel tips @PetsPyjamas with the hashtag #PPJterriersontour for a chance to win £250 to spend on you and your pet on PetsPyjamas.com (click here for more details and terms & conditions).

Guest Pet Inspector at The Dunloe

One of Ireland’s leading luxury dog-friendly hotels – we sent our guest Pet Inspector to test it out.

From five stars to a billion stars…

After the five-star luxury of Le Meurice in Paris, Rufus and Heidi stay in a tent, under a starry sky.

Going on holiday with you pet? Vet Holly Mash shares her top tips to guarantee your pet a comfortable journey.