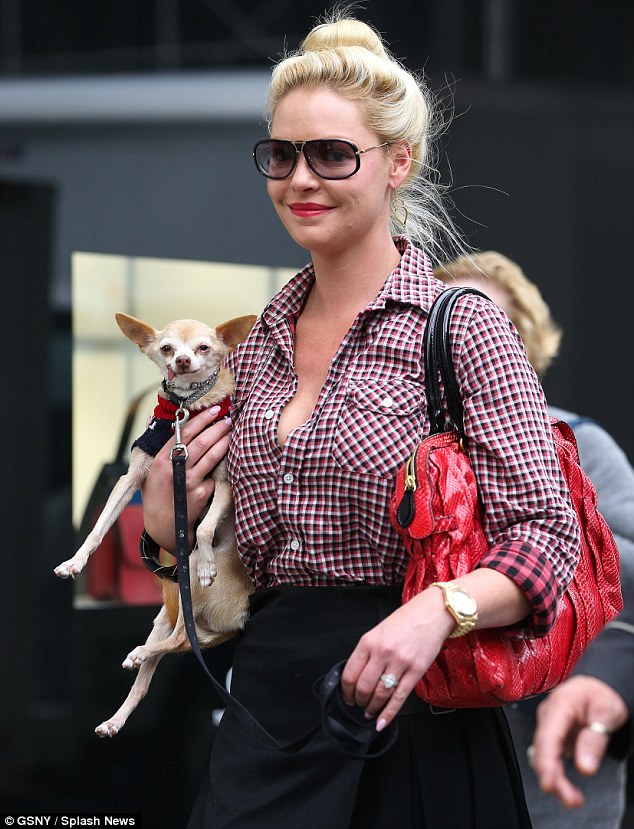 Actress Katherine Heigl stepped out in New York yesterday looking extremely stylish in a tartan shirt, belted skirt and knee high boots. And accompanying Katherine and giving her a run for her money in the style stakes was jumper wearing Chihuahua Gertie, who is the latest addition to her family of dogs. 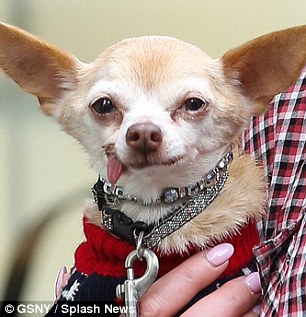 Well known for her love of animals, Katherine has seven dogs and three cats and is the founder of animal charity, the Jason Debus Heigl Foundation, in honour of her late brother who died in a car accident. The foundation aims to eliminate the needless suffering inflicted on animals by human cruelty. Katherine has also started a spay/neuter initiative and launched her own pet product line called Just One which aims to help stop the killing of more than 10,000 pets every day through the money raised. Katherine said on Good Morning America:

‘We’ve been funding programmes and projects that we really believe in and that we believe will make a difference in California and our shelter systems,’ Katherine said as she explained the premise behind Just One. They’re really bad at this point. There are so many animals coming in and so many getting euthanized and killed every day that we wanted to start to solve the problem.’

‘We believe it’s a solvable problem. But we were running out of money so we needed to come up with something to generate funds for the foundation, and this is sort of what we came up with.’

Shironeko – Is this the happiest cat ever?

Meet Shironeko, the Zen Japanese cat who has mastered the art of always looking happy.

As well as sleeping in the sun, cat’s love nothing more than playing. So to keep them constantly amused with our top ten toys.

How to stay safe on a dark winter dog walk

Winter has officially arrived so discover our top tips for keeping you and Fido safe during those darker winter walks.