Founder of charity, Trekstock, Sophie Epstone reveals how her miniature Labradoodle, Serge, is always involved in her exercise routine and how he helps her enjoy life outside of work. 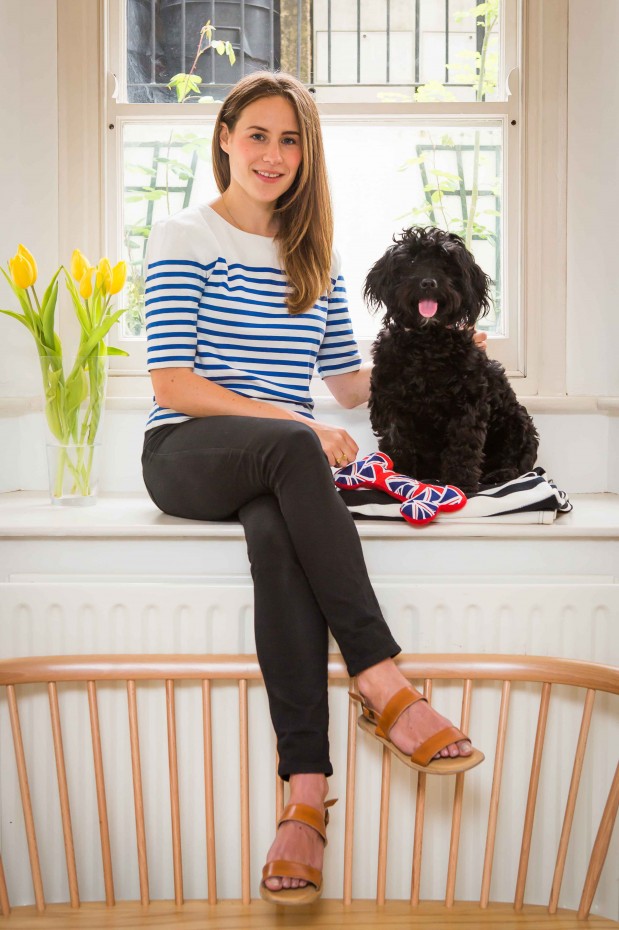 Tell us about your charity and how it came about?

The Trekstock vision is to help beat cancer through funding research of the highest standard. It hopes to help all young people have the right and relevant information to make better informed lifestyle choices. Trekstock was formed when a friend of mine had cancer at a young age in 2006 and I registered it as a charity in March 2010 at Downing Street, which is when Mark Ronson became our first Patron. It’s really grown over the past couple of years and we’re about to complete funding a clinical trial which could potentially revolutionise treatment for Hodgkins Lymphoma patients. We hope through this to make treatments kinder, more effective and less toxic so that all young adults with this disease can have a better survival outcome and quality of life. In addition to this, one of our core objectives is to make young people more aware of the small changes they can make to their lifestyles that will help in the prevention of cancer in later life.

Tell us about any upcoming future projects?

It’s a really busy time for us, we are only a small team and have a big global campaign next month; it’s something I’ve been working on for a while now and I’m really excited to launch it, especially as it will mean increased awareness of the charity.

We’ve also got a collection in Whistles at the moment across the UK stores which we’re so proud of. I love all the five pieces and want to buy them myself! 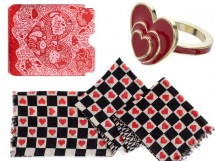 How old is Serge and what is his breed?

Serge is two on June 11th and is a miniature Labradoodle.  I’d been looking for a miniature dog as my Dad (who lives in Bali) has two toy poodles. I actually found Serge by chance through a breeder online and when I went to meet him in South London, totally fell in love with his black curly hair. He jumped over all the other pups to get to the front of the feeding bowl – I should have known then that food is his most favourite thing in the world.

What difference has Serge made to your life?

Serge is really calming. I’m really busy with the charity and it’s quite full on – I love that he helps me focus on something other than work. I’m also super lucky because I can pretty much count on one hand the numbers of times I’ve ever heard him bark. Serge makes me laugh and other people – especially when he holds the handrail up the tube escalator! He’s also a great alarm clock as you only have to lift an eyelid and he’s there waiting for his breakfast. 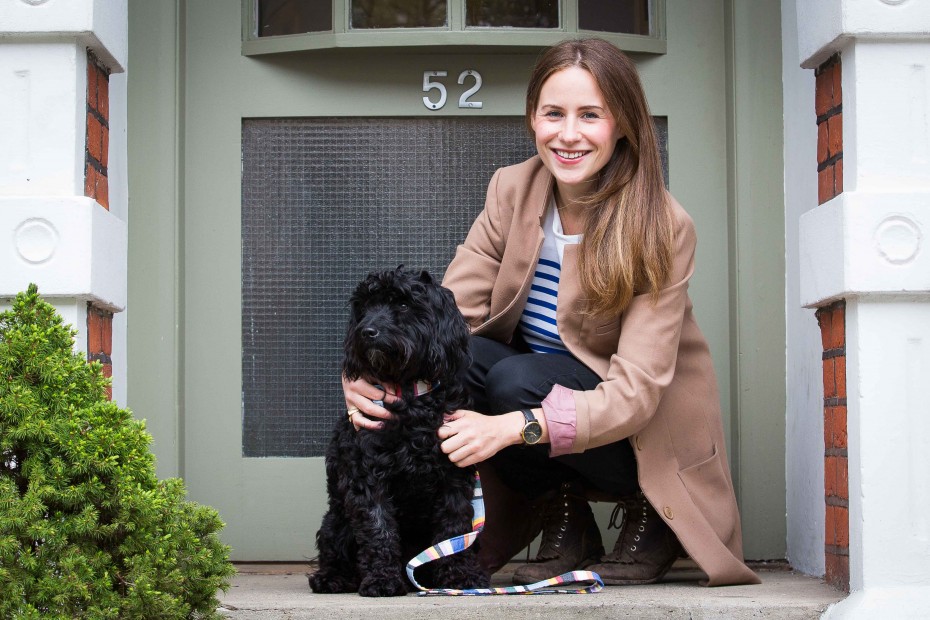 Tell us about your average day with Serge?

Serge and I wake up around 7.30am, he’s generally first up. I give him his breakfast and then he goes out in the garden while I get dressed, make a vegetable juice, grab my bag and we leave for either a walk from Archway to Kentish Town to jump on the bus there, or sometimes we walk all the way to work along Carnaby Street.

Serge is pretty happy in the office, he has a footstool to jump up onto, a little roof terrace that he plays on and his favourite day is Tuesday when at 12.30 on the dot, his favourite person Sharon ‘Soho Hounds’ comes to pick him up with Ottie, Gwynnie & Margaux – all the doodles. They go off to Regents Park for a two hour play and I can guarantee that Serge will then sleep all afternoon! He loves rolling around in the grass and anyone that knows him well, knows if there’s a puddle  he’ll be the first one to find it, lie in it, roll around and lick it.

He comes with me to the occasional meeting and everyone in the office take it in turns to take him for walks around Carnaby Street and Soho. I’ve started taking him off the lead near the office and he’s getting good at pottering round by my side, unless someone opens the door to Masala Zone!

We’ll get the bus home and sometimes when the weather is nice, we’ll walk through Regents Park and along the canal back home. By the time we get back, he’s ready for bed but not before his favourite thing in the world – dinner!

Tell us about your exercise routine with Serge?

He loves Hampstead Heath. If you get near it he pulls in that direction, or the direction of the Bull & Last pub which is opposite. I walk a lot and I’m surprised how far he can walk and just how quick he is for such a small dog. If Serge meets dogs in the park he circles them and then shoots off in front of them so they can chase him – they can never catch him! I sometimes take him back to Yorkshire as it is nice taking him to run through the big fields in my village, Menston. We did have a small incident at Christmas where he sneaked through a gap in a fence to round up a whole herd of cattle. He’ll always come back though, especially if you’re waving raw sprouts at him as they are his favourite.

Are you planning to involve him in any future treks?

Definitely, I’ll be doing my seventh trek this year to Mont Blanc in July for Trekstock and Serge comes with me on my training walks which are great for both of us. Mont Blanc is a bit far for Serge but I know a lot of people interested in doing a one day trek with their doggies. So together with PetsPyjamas, I think we will be planning something for later on in the year in London which I’m really excited about.

Where are your favourite pet friendly places with Serge?

Fortunately Serge isn’t a regular, but when he does go to The Village Vet in Highgate he’s well looked after. Serge explores London with me, last weekend we went to the park in Islington, then to Notting Hill with a friend, then on the Sunday to Waterlow Park in Highgate which is my new favourite. Most of the pubs around here like dogs; my favourites are The Stag, The Bull & Last and The Star.

Tell us about any amusing incidents involving Serge?

The most recent one was during the shoot for PetsPyjamas, I was saying that Serge hates anything (like a harness) going over his head. When the collar slipped off and I tried to put it back on, he jumped into a man’s car who was about to leave for work. He jumped over into the passenger seat and refused to move! 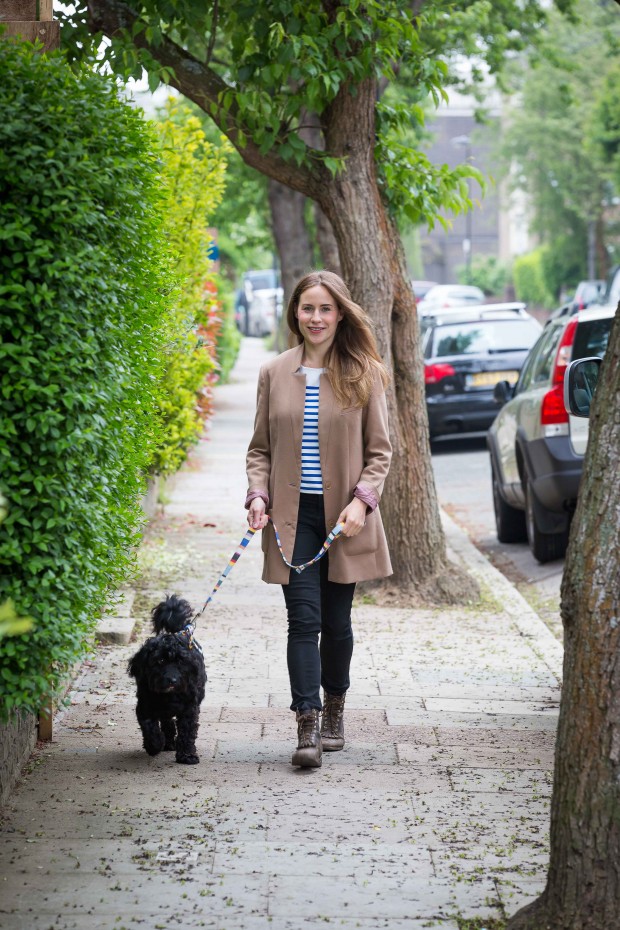 Does he have a best friend?

Serge loves his best friend Tako, they’re both good at different things – Tako is amazingly obedient and good at tricks while Serge is surprisingly good at recall. It’s cute watching them play on the Heath, teaching each other tricks and doing a lot of chasing. Tako is my friend Kate’s dog; she’s recently got another Shiba Inu called Ebi who’s super cute. We’re hoping by the summer they can all be off the leads on the Heath and won’t run after people’s picnics. I’m also quite excited to see if Serge will be brave enough to jump into the dog pond where the dogs paddle!

Dogs are totally part of the family, they have such personalities and I can’t imagine someone not taking care of them properly. Twice I’ve seen someone kick a dog, and it’s inexcusable. Dogs are a big commitment and I’m lucky that I can take Serge to work with me. On the occasion I’m going away or having a few meetings, he’ll always go to a friend or family. He goes to stay in Yorkshire and Surrey where there’s plenty of green space for him to run around. My friend Pip is a stylist and has a studio and she sometimes looks after him. The other day her and Serge went to the post office, to a couple of press appointments and when I called her at the end of the day, they were wandering up Conduit Street – life of an urban pup!

What is on Serge’s wish list from Pets Pyjamas

I’m definitely going to get Serge the lovely stripy collar and lead set that he’s wearing in the picture, plus the brown bone dog bowl as he could eat his dinner in under 30 seconds. Also if I brought home the Lily’s organic summer pack, I don’t think he’d complain. I also love the Union Jack dog bone.

Get involved with Trekstock

We talk to architect and model Freddy about his Corgi Arthur who’s a local superstar in Fulham.

Dance sensation Karen Clifton shares the story of her beloved dogs Betty and Marley with PetsPyjamas.

Award-winning luxury florist Nikki Tibbles, from Wild at Heart, is one of the most celebrated British Florists –  renowned for luxurious hand-tied bouquets, high profile weddings and events. We reconnect with Nikki to chat more about her London life with her six gorgeous rescue dogs. An avid dog lover, Nikki also tells us more about […]