LA based photographer, Emily Shur, chats to PetsPyjamas about her English Bulldog’s unusual name and why photographing celebrities with their pets creates a unique picture. 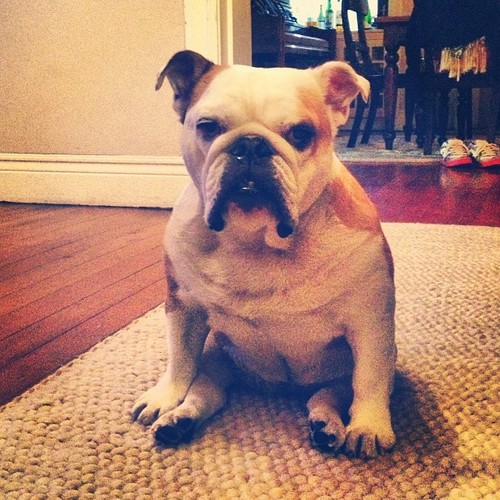 You have a bulldog called The Baroness – where did the name come from?

She’s named after the GI Joe character of the same name.  My husband had a crush on The Baroness growing up so it seemed like a good fit for our doggie.

How old is The Baroness?

She is seven years old.

When we initially set out to find a dog, my husband was only excited about a few breeds, an English Bulldog being one of them.  We coincidentally had a connection to a breeder through a friend so I made contact, and the rest is history.

There are lots of fabulous photos on your blog and instagram of The Baroness. She has the most amazing expressions – what kind of personality does she have?

Thank you!  Her expressions are very human (I think).  She’s funny, sweet, lazy, stinky, loud, and just all around awesome.  She’s the perfect complement to my husband’s and my personality.

What are her favourite things to do?

Her favourite things to do are sunbathe in the backyard, eat, snuggle, and run errands with me.  She loves riding in the car in the passenger seat, curling up and taking a nap while I drive around.

What do you love about being The Baroness’s owner?

She’s the best dog ever.  She really is the best companion anyone could ask for.  She’s sitting at my feet right now. 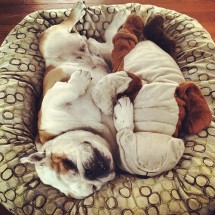 Your photos of celebrities are often infused with humour and unusual points of view – is this something that you set out to do or is it something that just happens organically?

I like to take pictures I haven’t already seen a million times.  I enjoy shooting people who enjoy having their picture taken, but don’t take themselves or the shoot too seriously.  I’d like to think that my point of view comes through organically.  Some people get it and some don’t.

You shoot a lot of A-listers with their pets – Goldie Hawn, Judd Apatow & Leslie Mann, Aubrey Plaza – do you like to get the subject’s pets involved? Does it add another dynamic to the photo?

I think animal lovers always loosen up when they’re photographed with an animal.  The shot of Aubrey Plaza is actually with my friend’s cat (kitten at the time).  I was looking for an excuse to photograph Charlie (the cat), and the shoot with Aubrey came up and seemed like a perfect fit.  When I shoot people at their homes and their pets are there anyway, it usually seems totally natural to do at least one shot with their pet.  I find it makes the subject happy, and it makes me happy too. 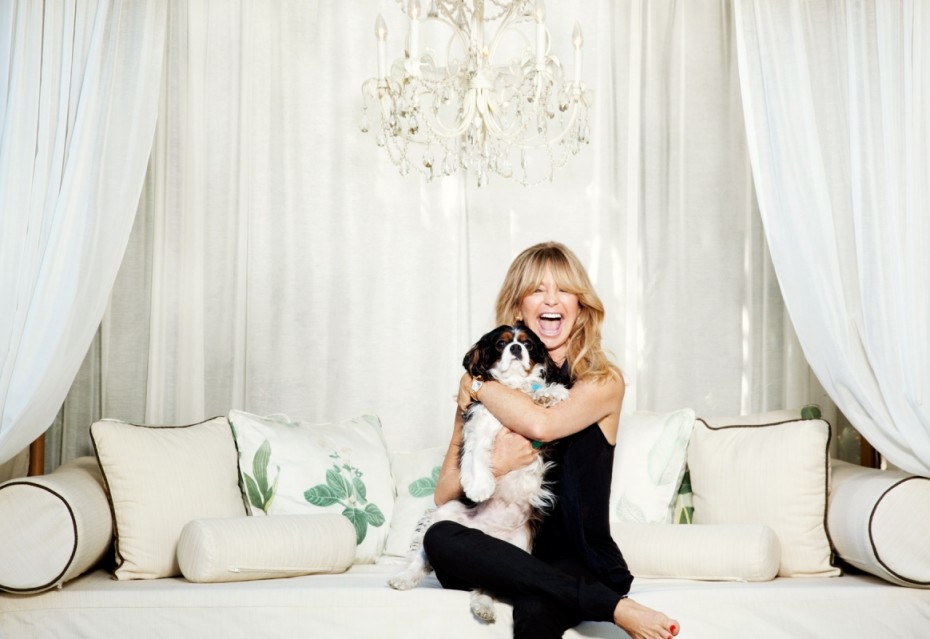 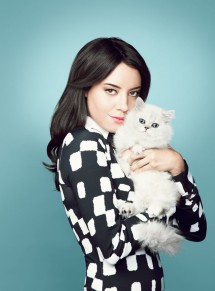 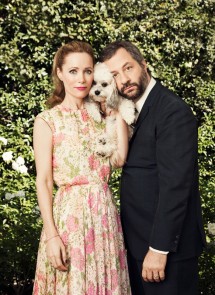 You did amazing fashion photos for Paper Magazine, called ‘Dog Days’, was this a concept that you came up with? What was the idea behind it?

Thank you!  The magazine actually saw a Polaroid on my site of my husband holding The Baroness.  You only see the back of him, and she is facing camera with a sweet look on her face – very expressive.  They approached me about doing a fashion shoot based on this image.  All of the clothing we shot had interesting back details, and then I paired a dog with every outfit. 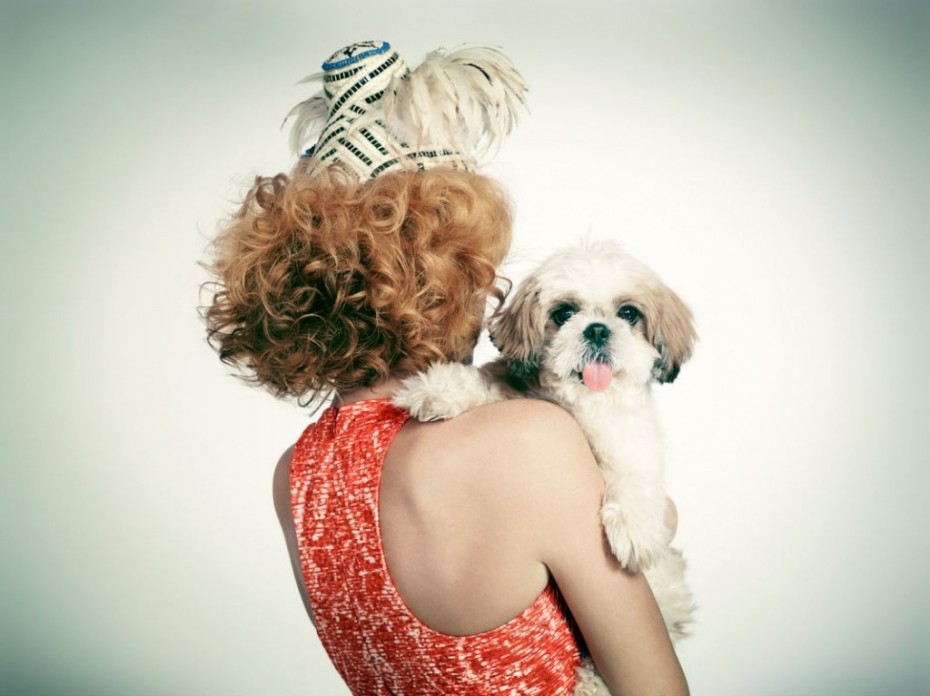 How did you manage to depict the various canine’s personalities?

I didn’t have much say in what the dogs did.  I shot each dog and outfit for about 10 minutes and just hoped for the best.

Did you handpick the dogs to work with your vision?

I did cast all of the dogs.  I put out the word to friends and friends of friends and got an overwhelming response from people who wanted their dogs in the story.  I eventually tried to get a good variety of breeds, and of course they had to be small enough to be held. 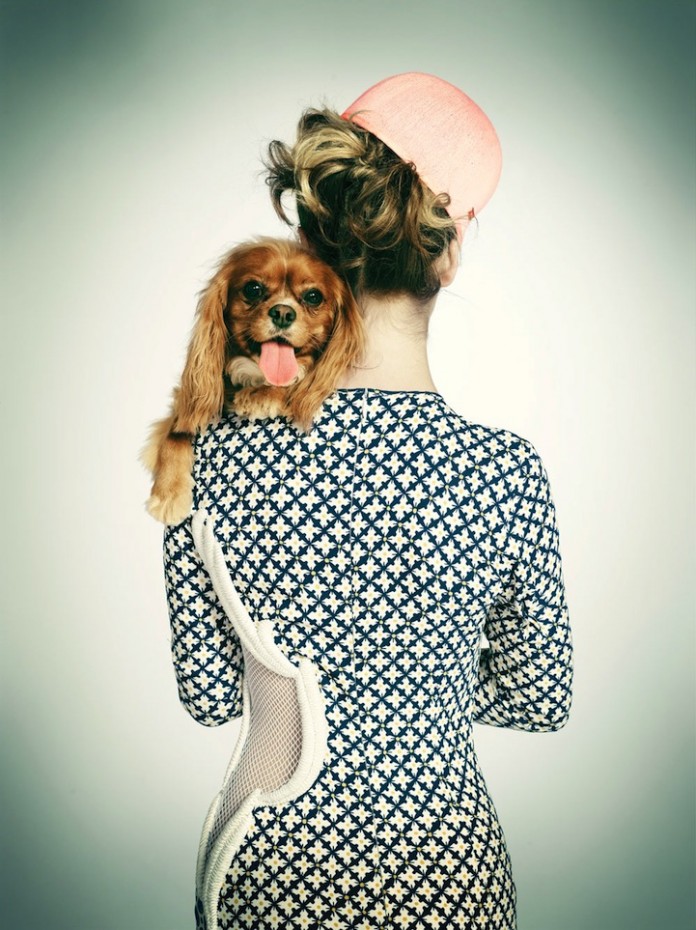 They do say don’t work with animals or children… Is it hard work getting animals to do what you want them to for shoots?

I am a true animal lover, and I don’t like forcing anyone – human or not – to do things that they don’t want to do.  I am happy to wait for the right moment.  Any time I get to spend with animals is enjoyable for me.

I read that for your personal projects you shoot landscapes. Do you approach shooting landscapes in a completely different way to humans/animals?

It’s a very similar approach in terms of what I look for in an image – great composition, light, and colour.  I like for all of those elements to come together and illicit an emotional response from the viewer.  The only difference is with a portrait you have the added element of a person or animal’s personality.  So, it’s just one more thing to work into a picture.

Do you find shooting animals fulfilling?

How would you define your style of photography?

Classic imagery focused on achieving a balance between emotion and technique.

What is next for you? Latest projects?

Hopefully shooting more animals!  I am working on an on-going landscape project in Japan as well as continuing my documentation of The Baroness’ activities on Instagram.

Shop for your dog

Michelle’s lifetime of love for all animals drew her to raw food brand Natural Instinct, which works to give pets a healthier diet and happier lifestyle.

Keep your home dirt and hair-free with our top cleaning tips for pet owners.

We shine the spotlight on the most stylish celebrity dog owners…