Michelle Ogundehin, Editor-in-Chief of ELLE Decoration UK, chats to us about her Basset Hound Stanley and how he has taught her to be patient and embrace early mornings. 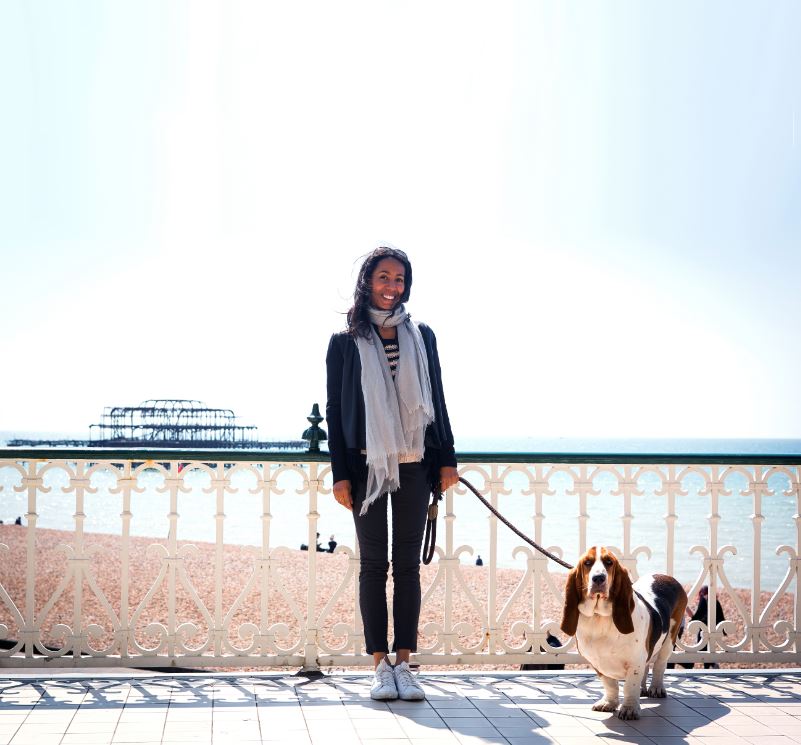 What does your role as Editor-in-Chief of ELLE Decoration UK involve?

I’m responsible for the vision, direction and editorial philosophy of the magazine and the brand that we’ve built around it. Day to day it’s a perpetual juggle between developing strategy, devising partnerships and projects to expand our reach, managing the team, tweeting (join me on @MOgundehin), writing, editing, meeting people who might be interesting to feature, seeing new products, and constantly thinking how we can evolve. It’s 24/7 full on and very demanding, but nothing beats physically seeing the book you’ve crafted in your hand every month. And, we were just awarded Specialist Consumer Magazine of the Year this June at the Oscar’s of the magazine publishing industry, the PPA Awards.

How old is Stanley, and what is his breed?

Stanley is now one and a half, he’s a Basset Hound and absolutely true to his breed description, in other words he’s terribly stubborn yet enormously affectionate, chilled and personally I think the coolest dog in the whole world! In fact I love him so much that we’ll shortly be adding to the family with a little brother for him, Henry. Double Bassetness!

How do you think the two of them will get on?

Stanley is very playful, so I think he’ll be thrilled to be presented with a new playmate, especially one that looks a bit like him. But I suspect when it comes to mummy cuddle time, he’ll be expecting the interloper to go back whence he came. There’ll probably be a bit of huffing and puffing about hierarchy, but Stanley’s such a mellow dog, I figure it won’t be long before Henry is accepted. He just better keep off his cushion! 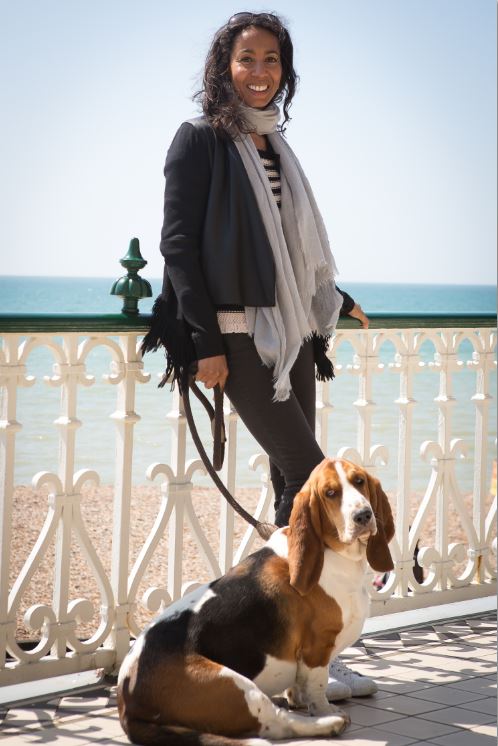 What are the benefits of living in Brighton for you and Stanley?

Brighton is a wonderful place to have dogs as there are lots of canine-friendly places and pubs, plus we have both the beach and the Downs on our doorstep. I’ve always loved being outside and hiking but taking a dog with you gives added purpose. Although it must be said, you don’t walk so much with Stanley as stop’n’sniff. Basset’s have a sense of smell second only to the Bloodhound so every excursion for him is like walking through a super sensory movie of everything that’s happened recently and previously. Far from being overwhelming he seems to revel in the olfactory overload as he picks up on each new whiff. Like I say, this was not quite the vision of striding out with my dog I had in mind. More pootling with my pooch.

What difference has Stanley made to your life?

You can teach an old dog new tricks! And I’m talking about myself here, not Stanley. I’d always defined myself as an owl, an inveterate night person, suited to late mornings and even later evenings. “I don’t do breakfast” or mornings with numbers below nine in them, at least not if you want me to be conversational. Oh how things change. Since Stanley arrived I’ve been up at 6.00am and stood outside 30 minutes later imploring him to poop. He’s also enabled me to reach new heights of patience and flexibility. As someone who generally likes everything to happen quickly, preferably yesterday, a stop’n’sniff dog was quite a stretch! He’s been so good for me. Plus dogs are also great conversation starters. I think I had more chats with new people in the first three months of getting him, than I’d had in the previous decade of living in Brighton. Stanley loves people. He stops for each new passerby, waiting expectantly for the now obligatory head pat and coo of admiration. Usually along the lines of, “Ohhh, so cute, look at those ears!” I’m concerned he will become unduly attention-seeking.

Tell us about your average day with Stanley…

Sadly, my office does not currently permit pets in the building (although I’m working on them!), so Stanley can’t come to work with me, although I confess, I did sneak him in a few times when he was a puppy. But he has a grand life. After breakfast he gets to snooze until Simon, my fabulous (and properly certified) dog walker, comes to pick him up at around 11.30am. Then along with about four or five other dogs, including a sweet little border terrier who’s kind of his girlfriend (she teases him by nibbling his ears!), they all go off to the Downs for a really good romp, rain or shine. Or in Stanley’s case, a bit of a romp and a lot of sniffing. Then he’s dropped back home around 2.30pm whereupon he goes straight to his cushion for a nap through til dinner time. I’ve observed that even when I’m home all day he sticks to this routine, eat, sleep, walk, sleep eat!

Tell us about your exercise routine with Stanley?

Bassets don’t need a huge amount of exercise. Sometimes I’ve thought I’ll nip to the post office and take him with me and he mounts something of a sit-down protest. In other words we get halfway there and he decides he doesn’t want to walk anymore so down the bottom plonks and he won’t be budged. And as he’s a healthy 32kilos (heavy bones, big paws, broad chest, Bassets are often described as big dogs on short legs), I really can’t shift him. I’ve learnt to always be armed with small chunks of cheese or chicken in a little Tupperware pot. A Basset will do almost anything for food! Having said that, they don’t particularly do fetch. But he’s pretty well always up for a burst of running and a play, which is great as I don’t want him to get fat, which Bassets can be prone to. He runs like a rabbit though, bounding along ears and jowls madly flapping, but he corners like a demon – must be that low centre of gravity! He’s very friendly too, which means I can take him anywhere, and as a breed they’re particularly renown for being very good with children. But I worked hard on socialisation when he was small, taking him to skate board parks, school, on the train, buses, into crowded shopping centres and so on. As a result the only thing that seems to spook him is when his bowl slips when he’s eating. And he’s not crazy about the vacuum cleaner. 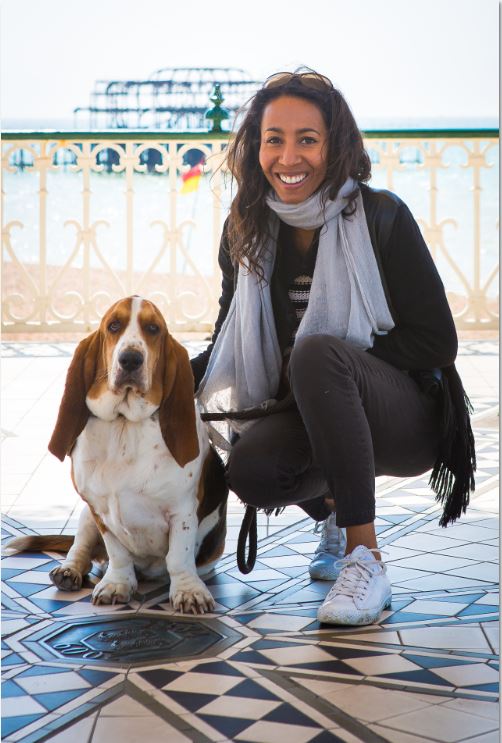 Have there been any amusing incidents involving Stanley?

Oh how long have you got! Most of them centre around his stubbornness. Oh and then there was puppy school; utterly traumatic for me. He’d do everything beautifully at home, but as soon as we were in class, he’d get completely distracted by everyone else’s smelly treats. Suffice to say he was something of a destructive and disruptive influence such that the other puppy parents clearly thought I was an errant mother. It regularly left me in a state of abject embarrassment and with a pounding headache. After about six weeks I swore never to return. He was homeschooled from then on, and is generally as good as gold. But he’s a hound, and they were originally bred to follow scents, so if he smells something interesting, he loses all focus.

He does all the usual naughty doggie stuff too like sticking his nose straight into the fridge and the  dishwasher, and sitting exactly behind you when you’re in the kitchen, just in case some morsel is dropped. He likes to “help” when I’m gardening too. But mostly he lives for the moment you sink onto the sofa so he can jump up and join. In fact I think the first command he learnt was “cuddles!” The last was “come!” Recall, I’m afraid, is not his strong suit. All bassets follow their nose first, commands second.

The biggest truism for me is that there’s no such thing as a bad dog, only bad owners. People who say oh my dog doesn’t like other dogs are entirely at fault, likewise those who don’t do enough research into the different breeds and then are surprised when they learn how much exercise certain dogs require. Your dog’s behaviour is your product. You can’t keep a high energy dog shut indoors all day and then be cross because it’s been destructive. Every breed has a different nature and therefore different needs. True, aesthetically I absolutely adore Bassets, but my choice of dog was ultimately determined by the combination of its looks, characteristics and my lifestyle. I knew I didn’t have four hours a day to walk a dog, so something like a Jack Russell would have been a nightmare! I also think it’s important to really interact with your dogs, to stimulate them by trying to teach them tricks or new commands so that they don’t get bored. But most of all I think they like company, they’re social animals, which is why Henry will be joining us soon, so now I can be sure that Stanley will never be lonely. 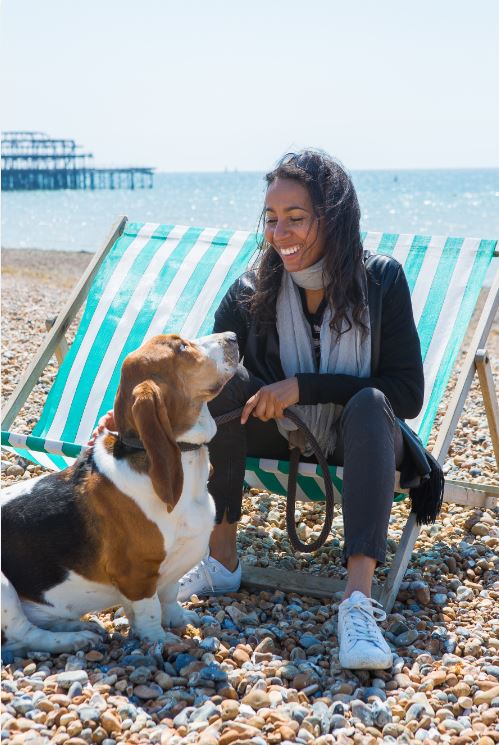 We interviewed British No.1 Tennis champion Johanna Konta, about life with her No.1 fan, the adorable Bono.

Severus and Lily stay at The Cary Arms in Devon

Severus and Lily from Spaniel Life spent a couple of nights at the beautiful Cary Arms with their humans.