Researchers from the University of California San Francisco and the University of Michigan have discovered that a child’s risk of developing asthma and allergies is greatly decreased if they have been exposed to a pet dog. Living alongside a pet from an early age encourages the human immune system by reshaping the gut microbes which reduces reactivity to common allergens.

Findings from the recent study showed one specific bacterial species inside the gut of the dog-exposed mice protected them from certain allergens and can prevent airway inflammation caused by said allergens. The researchers have said they believe that microbiome manipulation will at some point be used in line with studies such as this one to prevent the development of asthma and allergies, or to treat existing cases. 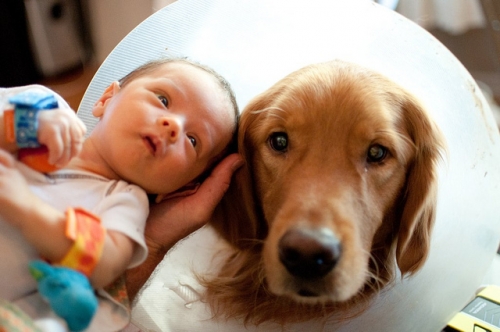 Susan Lynch, who led the study, said: “The composition and function of the gut microbiome strongly influence immune reactions and present a novel avenue for development of therapeutics for both allergic asthma and a range of other diseases.’ The study set out to investigate whether being exposed to a distinct house dust associated with dogs could have a protective effect on the immune system and the results were very promising. The researchers have underlined that the success of the study could provide a new therapeutic strategy against pulmonary infection and allergic airway diseases in the future.

JoJo Maman Bébé is the UK’s leading independent maternity and baby wear multi-channel retailer with products available online and via a mail order.

In her third blog instalment, Princess Katalin zu Windischgraetz, discusses how the health and well-being of a pet is an important factor when designing her unique range of pet beds.

Our favourite pair of Spaniels, Severus and Lily, paid a visit to The Lamb Inn in Burford to try out their delicious doggie menu.