Seven year old rescue dog Zoey and toddler Jasper are, quite possibly, the most adorable duo you will lay your eyes on. 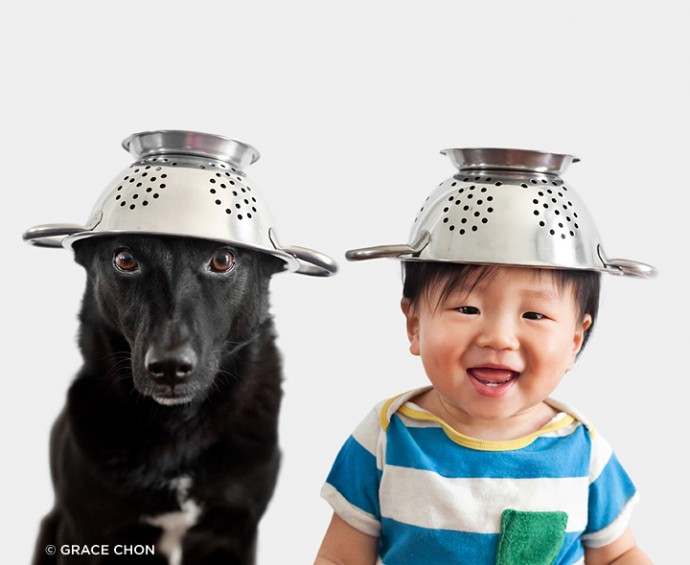 In a series of portraits – taken by the pair’s mum Grace Chon, a professional pet photographer in LA, and posted on her Tumblr blog ‘zoeyandjasper’ – the twosome can be seen sitting side-by-side dressed in identical costumes, ranging from bunny ears to sombreros.

Grace came up with the idea for the series after trying to think of ways to get creative between nap times.

“It surprisingly wasn’t difficult when I started the series to get both Zoey and Jasper looking straight into the camera,” explained Grace.

“Usually when I photograph dogs, I use high reward treats or toys to get them to cooperate and look into the lens, however, Zoey for some unexplainable reason just loves dressing up and loves the camera.”

The runt of the litter – Zoey had a difficult start to life after her mother gave birth to her outside a restaurant in Taiwan. They were quickly hosed away by the owner who considered black dogs to be bad luck.

Luckily she was rescued by a student and eventually found by Grace; “One day on a pet adoption website I spotted a little puppy’s face staring back at me and I just knew in an instant that I had to adopt her.”

As a result of her past, Zoey is very shy and wary of meeting new people – not even letting Jasper come near her to begin with. However a turning point came, when Jasper was seven months old and Zoey rolled over to allow him to pet her.

“Every new moment Zoey and Jasper share is a true triumph for Zoey overcoming her fears and I couldn’t be prouder of her, I am also so proud of Jasper for being such a gentle, compassionate little boy,” said Grace.

Your dog can play Lord of the Manor at one of the many luxury hotels and cottages throwing open their doors to pets and they’ll feel just as welcome as you are!

Top 10 tips to keep your pet safe this Christmas

Fulham veterinary nurse Rosie Martin, gives us her top 10 tips on ensuring your pet stays safe and healthy this Christmas.

You heard it here first: a new dog-friendly guidebook is being published in spring 2022!  Lottie Gross and her adorable Manchester Terrier Arty are leading the pack by curating the very best dog-friendly places around Britain with the excellent editors at Bradt Guides.     An incredibly talented travel journalist, Lottie has written for The […]