The Duchess of Northumberland & Fuzzy

Best known for her redevelopment of The Alnwick Garden at her home at Alnwick Castle, The Duchess of Northumberland is the first woman to serve as Lord Lieutenant of Northumberland and is an avid dog lover. Chatting to us The Duchess explains why she loves her Spinone Fuzzy’s independent nature and reveals his love for rabbits. 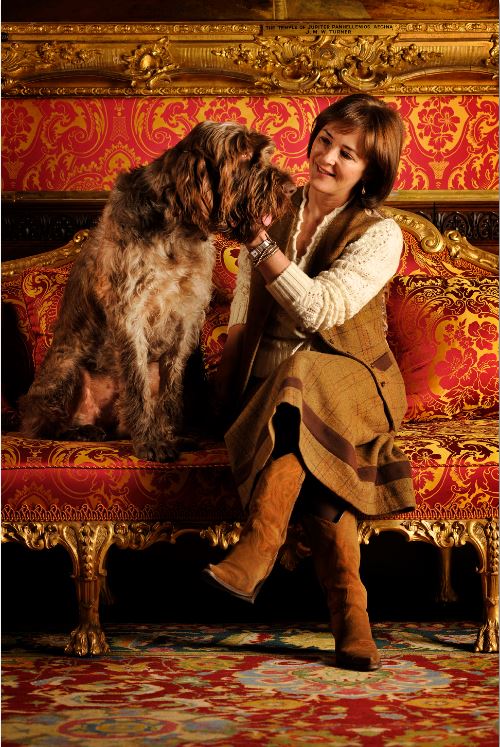 Have you always been a dog person? I have always had Spaniels and all our children had dogs as soon as they were old enough to look after one. I think owning a pet is just the best thing for a child; it teaches them about responsibility, companionship and stops them from being selfish. I think it is vital for a child to have a pet.  My first dog as a child was a longhaired Dachshund called Poppet. And then I had a non-working Cocker Spaniel called Benji, followed by a succession of Spaniels.

Why did you decide to get a Spinone? My daughter’s German Wirehaired Pointer had died and she called me to tell me that she was going to look at a litter of Spinones, which are one of the oldest breeds in civilisation which she thought was very cool.  Oh what a disaster! There were all these gorgeous puppies running around and I couldn’t help myself, I just had to have one. So my daughter and I got two brothers. My only mistake was that I knew nothing about Spinones although I did have a book – my husband often says we should sue the author because it did not prepare us. It said Spinones like to trot alongside you, well Fuzzy is always a mile in front of me, he has never trotted alongside me!

What sort of personality does Fuzzy have? Spinones are strong dogs and they do what they want to do; he is very nonchalant, and can be obstinate, with things often on his terms, which I quite like as you never know what is coming next. He rules the roost but in a very quiet and gentle way. It took my husband a couple of years to get used to him but now he adores him and they are great friends; it is less of a master-dog relationship, more friends. If you ask him to do something, he will look at you and then about five minutes later he thinks, ‘actually I think I will but in my own time.’ He isn’t like a Spaniel that is always ready to please. I watch our Spaniel and he adores my husband and will doing anything for him straight away but Fuzzy isn’t like that. What I love about Fuzzy is that he could go off with any of my children and be as happy with them as he is with me, which is a really nice thing. He just wants to be with people, he loves them.

Do you ever involve Fuzzy in your work? I read in the paper that Spinones are used as reading dogs, so for a child that doesn’t want to read they use Spinones for the children to read to and gain confidence. I do a lot of work in schools and there was one occasion where Fuzzy was on his own at home and I thought I can’t leave him so I took him with me to a primary school. He was amazing, he sat down with all these tiny children who were all running around, pulling his ears and he just sat there very relaxed and chilled. So now whenever I go to schools I take fuzzy with me as it relaxes the children. He loves children and adores babies. 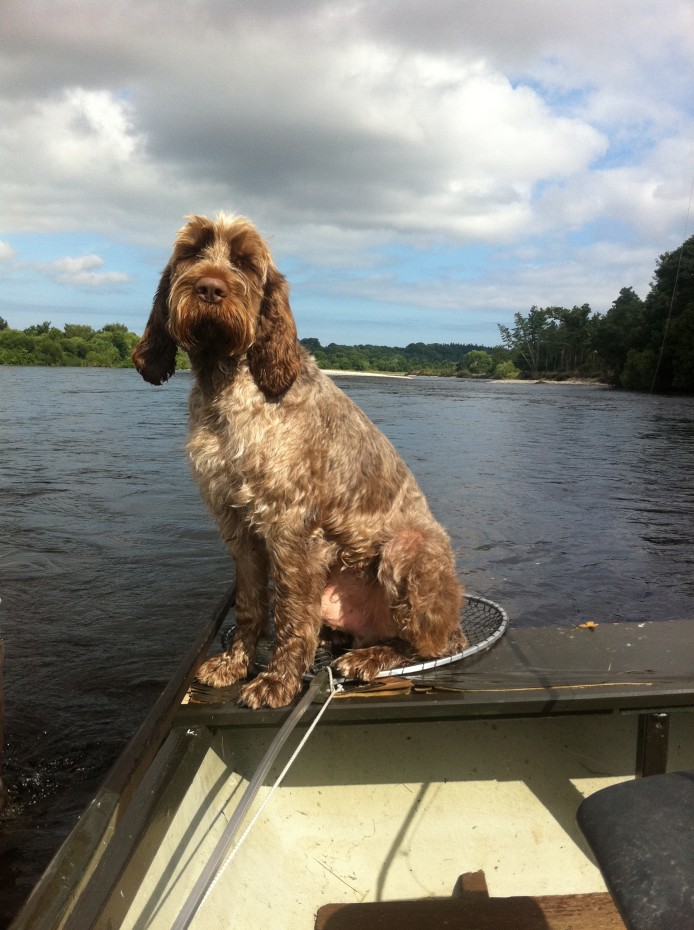 What is Fuzzy’s favourite pastime? He loves his walks and he loves chasing rabbits – he has never caught anything in his life! He is obsessed with rabbits but I always think why as he never catches them! He loves fishing, we go on an annual fishing trip and he loves coming along and sitting on the seat at the back of the boat. He loves the river and watching fish.

Spinones are working dogs, do you work Fuzzy? He is supposed to be a working dog but for him shooting is about the party. He loves the other dogs and he might do a bit of work but really it’s about the fun, the people and other dogs. He will retrieve things but often he gets sidetracked, often by rabbits!

Has he taken a lot of training? Spinones do take a lot of training, they are very obstinate. They are not the right dog for people who aren’t willing to spend time on them. That is the one thing that worries me about Spinones is that people fall in love with them and their wonderful humanlike faces but don’t realise what they are taking on. It has taken me two years to get to grips with fuzzy, whereas with the Spaniels it only took me six months. I would never have given up on him but you have to be willing to work at training them well.

Have you ever had any embarrassing moments with Fuzzy? I once took him out for lunch to meet some people who love Spinones. He had been brushed and groomed so he was looking very handsome and throughout lunch he behaved so well. Then after lunch we decided to give him a walk near a field of sheep that were fenced off by a six-foot high fence but I wasn’t worried as Fuzzy has never chased sheep and I have to lift him into the car as he can’t jump. So Fuzzy is trotting along next to me and the next thing I know a rabbit appears and Fuzzy heads off. I blow my whistle – nothing! Then the rabbit disappears and Fuzzy suddenly spots the rare breed sheep and leaping into the air jumps over this six-foot fence to get at them.  So it seems that he can jump when he wants to! He can be immaculate and then he goes and lets me down!

What difference has Fuzzy made to your life? He has definitely enhanced it. I love him; he is just a great family pet. He came to us at the right time when all the children had left home and now when the children come home Fuzzy will happily go off with any of them and spend time with any one of them, something a Spaniel wouldn’t do. Fuzzy will happily sleep on any of their beds if they wanted him to. 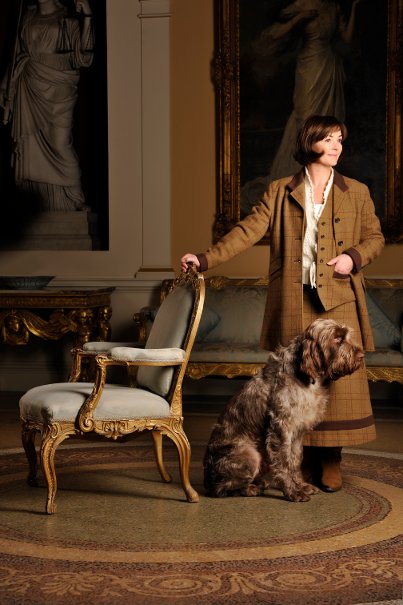 Alnwick Gardens is open to the public and you have lots of people in and out of your home, how does Fuzzy cope with this? He enjoys it. If there is a function he will just work his way around the room and then happily fall asleep in a crowd of people. A few weeks ago our daughter got married and there is a picture of chaos with hundreds of people and he is just there in the middle of it completely oblivious to what is going on. I will often take him into Alnwick Gardens and he is always a big hit. He will just lay there and let people come up and stroke him.

Any loveable habits? We tried not to have him on the bed, but we couldn’t stop him. We can’t move him and he is always on the wrong side; we push him and push him but can never move him. And then we discovered that even if we told him to get off in a hundred and one different ways and tried to push him off he wouldn’t move but if we switch the lights off and count to 15 slowly then by the time we reached 15 he gets off. I have worked out that if you give up then he thinks he has won and he will do what you want.

What would you say to other people who were thinking of getting a Spinone? Talk to others who have Spinones and spend some time with them. I know a few people who have them in towns but they are big dogs and need a fair bit of exercise so they are more suited to the country. We were lucky that we had the space and for someone who is a control freak don’t get a Spinone because you will never control them totally! They are very sensitive dogs who need time and people. Even though Fuzzy is quite aloof he is also needy in that he needs company. He is very affectionate but on his terms. He will give you his paw and you will stroke him for a bit and then when he has had enough he will go, you can’t make him stay.

Pup Aid was founded in 2010 and is already Europe’s biggest anti-puppy farming event with their main aim to end puppy farming.