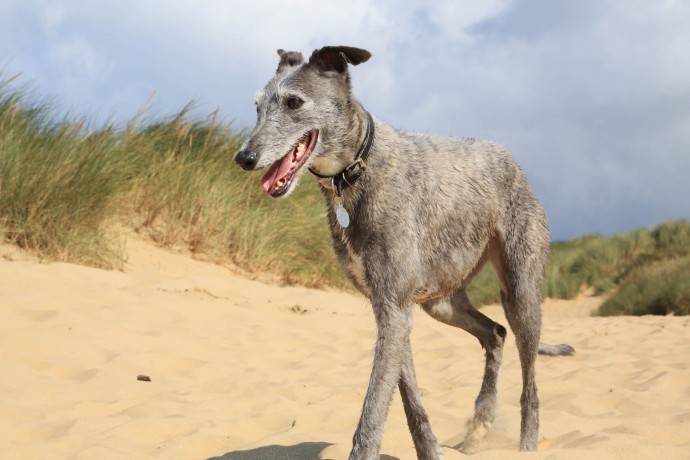 Being a greyhound, I have two sides to my character: the dozy, lazy sucker for soft fabrics and strokes; and the All Action Super Dog.

The Gallivant satisfied on both counts. 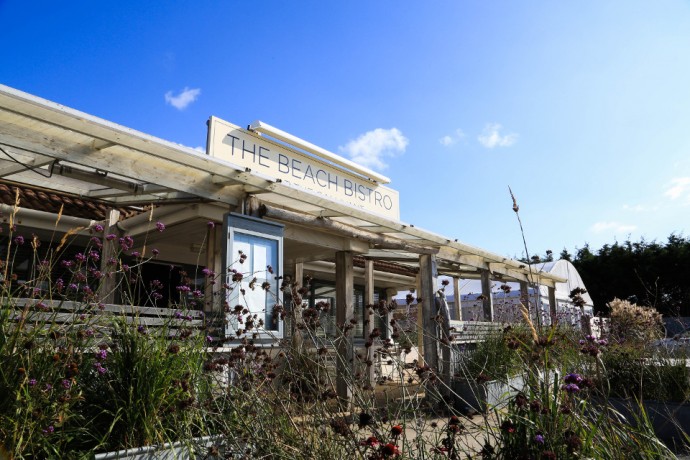 For a start, there’s an outrageously fabulous and enormous sandy beach just the other side of the road. I can’t go on pebbly beaches because the pebbles hurt my dainty paws, and sandy beaches are hard to find in the South East. So, when I realised this one was one of the best in the UK, I was beside myself with excitement. 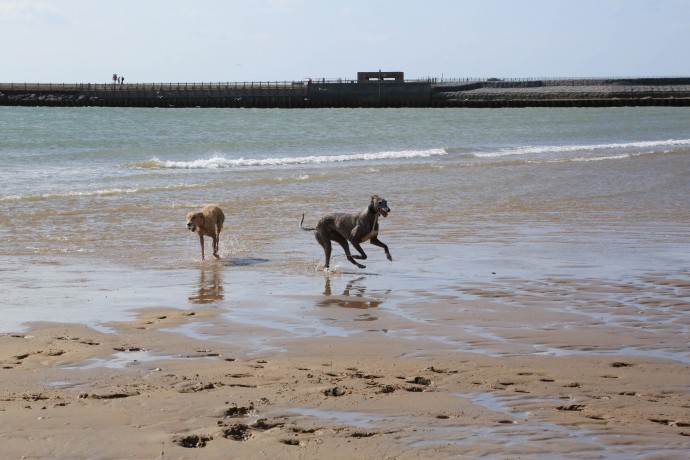 I was not disappointed. Camber Sands served up mile upon mile of the golden powder (perfect for sprinting) and shallow water with gentle surf (ideal for stick-chasing). For our first walk, on Sunday morning, there were lots of other dogs and people on the beach, enjoying the unseasonably great late-September weather. Until October, we’re not allowed on the central part of the beach, but lots of people seemed to be ignoring the rules this late in September, and the law-abiding amongst us had plenty more to play on.

The dunes were also a joy – running all the way along the beach, they are riddled with little paths carrying the promise of mammalian or insect prey. (Though their promises were empty on this occasion.) 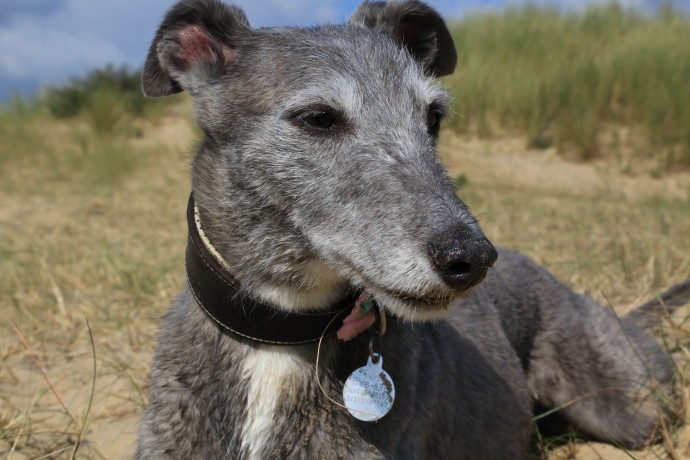 Back at the Gallivant, everyone turned out to be a dog lover. Although dogs aren’t allowed in the combined restaurant/lounge, we can hang out under the heaters on the veranda and have the run of the gardens. There’s even a strip of lawn surrounding most of the hotel, perfectly suited to running, playing and peeing.

When we arrived at our room, the first thing greeting me was a personalised travel box from PetsPyjamas with my picture on the stamp, stuffed with all sorts of goodies, including an awesome squeaky toy that I couldn’t put down for hours. The room was big enough to play in, and had a dog bed, a sofa and a big, comfortable bed that I was allowed to use when they were out. 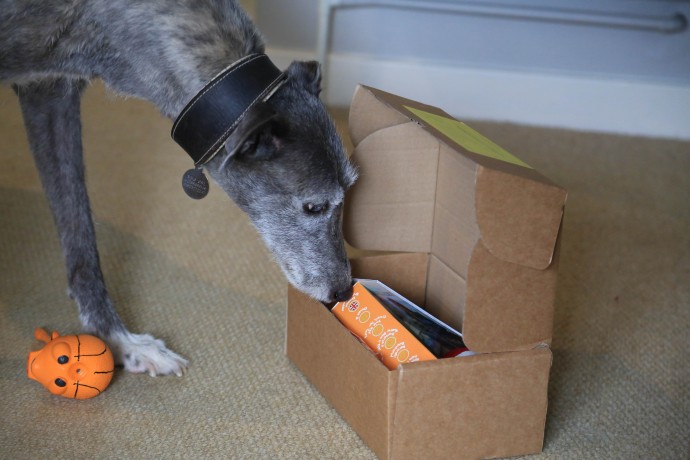 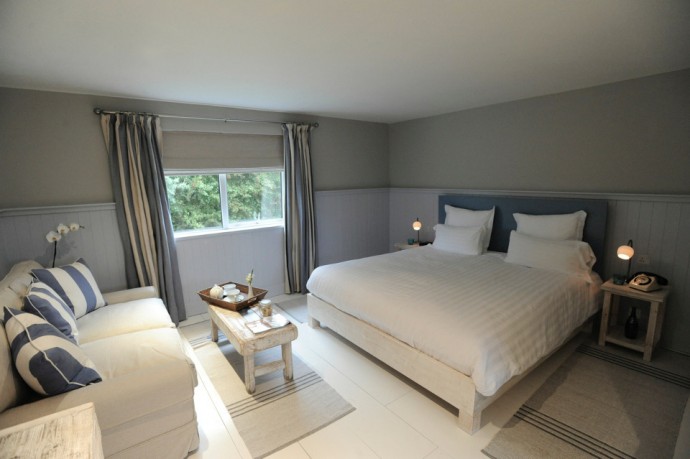 While my parents had dinner, I spied on them from a bed in reception, installed for me by a nice man who brought me water and snacks.

I’m told the best thing about the Gallivant is the food. Dinner and breakfast (but not drinks) were included in the PetsPyjamas package, and my owners said the dinner alone justified the price. They both had beautifully cooked, tender, cod tipped straight off a local boat and into the chef’s skillet, washed down with an excellent and very reasonably priced burgundy, and finished with raspberry panacotta and rhubarb with meringue and vanilla ice cream. Breakfast included eggs any style, porridge and organic local yoghourt with fruit compote. All of it was outstanding, as was Monday’s lunch of breaded plaice with rosemary chips. 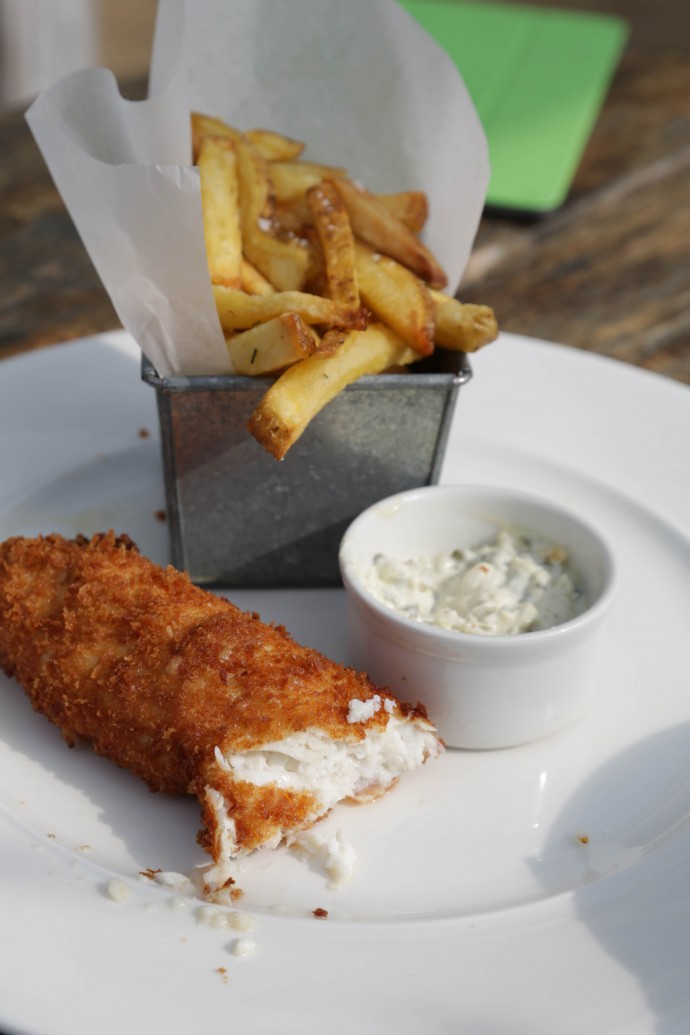 I had kibble and meat paste, as usual. Fancy food for humans is all very well; but for me, the star was the beach, and I can’t wait for our next visit.

If you want to know more or go to The Gallivant Hotel yourself – pick up your bone and call the Pet Concierge on 0203 642 3162 or email us at –woof@petspyjamas.com

Which one of these hat loving felines is your favourite?

Momo & Me – The life of a social butterfly

Health, beauty and fitness writer Lucia Ferarri writes her final blog for the Momo & Me series.

A labrador from the Isle of Wight has become a surfing celebrity.