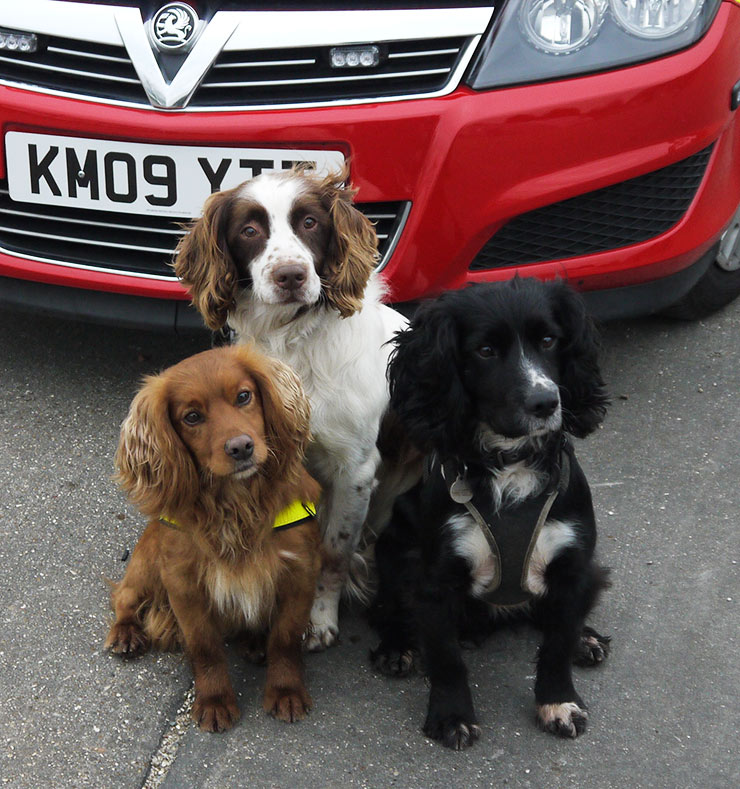 Five of the UK’s Most Heroic Dogs

Dogs are incredible creatures. They constantly find new ways to amaze us, it’s why we love them so much! Just being themselves is enough, but sometimes our furry friends go above and beyond to protect us and even save us from danger. There are many stories of heroic dogs, but we’ve picked out five that we felt we just had to share. Remember, not all heroes wear capes, some wear collars…

Eight-year-old military dog Mali heroically detected bombs and insurgents for the British special forces as they raided a hotel in Kabul that was occupied by the Taliban. Mali was sent through direct fire to sniff out explosives and detect the whereabouts of enemy troops, which he did successfully.

Despite being injured by three grenade blasts – causing damage to his chest, legs, ears and teeth – amazing Mali showed phenomenal courage and persevered in the mission which lasted 7 and a half hours.

Following his heroics, Mali retired from frontline duties after receiving treatment for his injuries, however he is still happy to be involved in military training. Mali was awarded a PDSA Dickin Medal – essentially a Victoria cross for animals.

Sherlock, Murphy and Roscoe (aka London fire dogs) are all valuable members of London Fire Brigade’s fire investigation team, who attend an average of between 180 and 230 incidents a year.

These dogs were praised for their outstanding courage during the Grenfell Tower fire crisis. Working alongside firefighters are rescue teams, the dogs helped the fire investigators to identify where exactly in the tower block the fire started.

Highly trained to detect ignitable substances, the dogs were able to inform the investigators how the fire developed, and more specifically if an accelerant was used to spread it. The incredible work of fire dogs help speed up investigations, discover valuable evidence, and protect the future safety of the people of London.

Mich Boyle, Murphy and Roscoe’s handler said: “every time I work with them and they find something, it amazes me, and gives me immense satisfaction.”

In December 2017, Policeman Dave Wardell and his canine companion Finn were called out to a suspected armed robbery in Stevenage. Upon identifying the suspect, both Dave and Finn chased after him. When trying to escape over a wall, Finn chased up with youth and pulled him to the floor. To fend off Finn, the teen pulled out a knife and stabbed the dog in the chest.

Scared for both his and his dog’s life, Dave scooped up the injured Finn and ran to his van. Luckily, the knife narrowly missed Finn’s heart, and after four hours of life-saving surgery, the brave German Shepherd made a full recovery. Incredibly, he was back patrolling the streets by Christmas!

Finn’s heroics helped the Police to catch and arrest the thug, who was later sentenced to 4 months in prison. Since the incident, Finn has retired from his duties and has now switched from Finn the police dog to Finn the pet. Retired police dogs aren’t always kept on by their handlers, but Dave said there was “never a chance” he would let Finn go.

Dave said that he’ll “miss him at work, but now we’ll get to go away together and have lots of new adventures”. Dave and his family recently took Finn to a lovely seaside holiday in Norfolk. This is the sort of thing we just love to hear!

Seven-year-old cocker spaniel Sam, another military dog, saved countless lives on the battlefield with his amazing ability to detect landmines and other explosives before they are a danger to British troops.

The dog, who belongs to the 1st Military Working Dog Regiment, has been deployed on multiple tours to Afghanistan. The first of which, in 2013, saw Sam fall down a 30ft well whilst he was on a search mission. Unfortunately, Sam broke his foot and was immediately evacuated to Camp Bastien, where his injuries were treated.

Once he had fully recovered, Sam was eager to get back into the field and do what he does best – save lives. Six months later, Sam took part in Operation Ismay, helping to secure the NATO summit near Cardiff by searching areas and buildings as part of an effort involving 9,000 policemen.

10 things you need to know before getting a dog

Sam then rejoined the armed forces for two further tours in Afghanistan, where he continued to carry out his outstanding detection work. Sam went on to become the Army’s best explosive detection dog!

But Sam wasn’t just a good nose and a trooper, he was a friend too! During his downtime, Sam would often visit injured soldiers in the medical centre to keep spirits and morale high.

Lieutenant Colonel Neil Lakin said that “despite the ordeal of falling from such a great height and becoming injured, Sam has bounced back and become one of our most valued assets.”

Breed: Collie cross
After enduring horrific abuse and neglect in Romania, Fleur was rescued from a kill shelter and has since become a therapy dog in the UK.

The Collie cross was left on the street in an awful state, and after being taken in by dog catchers and then rescued by the Valgrays animal charity, the amazing Wendy Morris saw her picture on their website and immediately decided to adopt her.

Three weeks after starting her new life in Britain with Wendy and her two other rescue dogs, she fell seriously ill with a rotten bowel. The vet gave her a 1% chance of survival and recommended euthanasia, but Wendy sought a second opinion from specialists at the Royal Veterinary College in Potters Bar. After rare and complex surgery, and weeks in intensive care, Fleur made a full recovery.

A hero in her own way, the inspirational Fleur has now become a Pets As Therapy Read2dog, going into primary schools to help children read and communicate. She also visits nursing and residential homes to provide valuable companionship and happiness to those who need a furry friend.

Wendy said: “I’m so thankful to everyone who was involved in giving Fleur a chance in life.”

Do you know of any heroic dogs? We’d love to hear your stories on our Facebook page @PetsPyjamas !