As well as all their great work as a vet charity, PDSA also awards medals to hero animals. 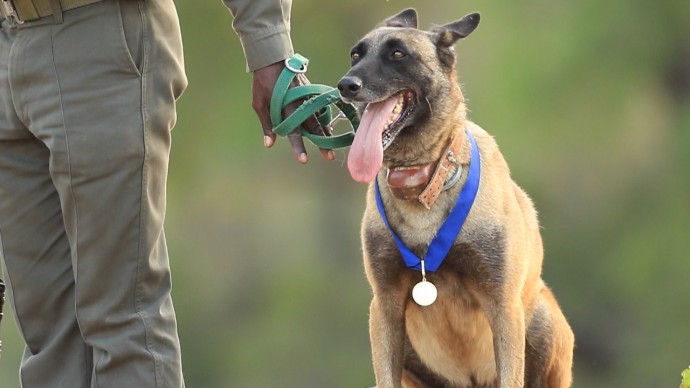 Their prestigious animal awards programme was started in 1943 by PDSA’s founder, Maria Dickin, with the inauguration of the PDSA Dickin Medal. The medal, which is often referred to as the animals’ Victoria Cross, honours animals that have displayed outstanding acts of bravery in the theatre of conflict.

The latest recipient of the PDSA Gold Medal is K9 Killer: A dog that risks his life in the battle to save the African Rhinoceros from extinction. 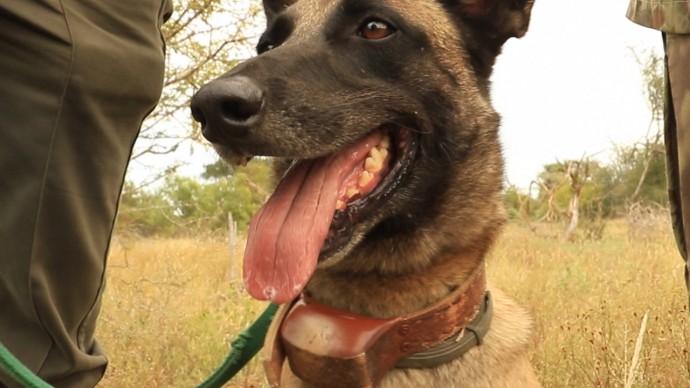 In the past four years, the acute tracking skills of five-year-old K9 Killer, a Belgian Malinois, have led to the arrests of 115 poachers; making him the most successful dog working with Kruger National Park’s Special Operations Team.

Alongside handler Amos Mzimba, Killer is flown in by helicopter to track and apprehend armed poachers when they are sighted, or a dead rhino is discovered.

The PDSA Gold Medal is the highest honour a civilian animal can receive for bravery and devotion. Killer is only the 24th PDSA Gold Medal recipient worldwide, since the award was instituted in 2001.

Both Killer and handler Amos can be deployed deep inside Kruger National Park several times a day, and Killer’s tracking and early detection of suspects is paramount to keeping Amos and the rest of the team safe from harm. 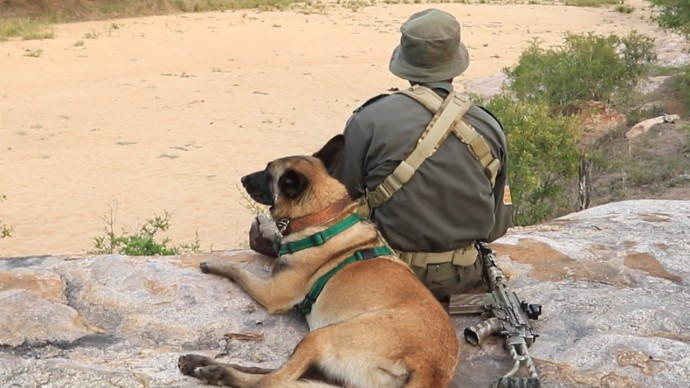 On one occasion, following a sighting of poachers in the infamous Bangu area, close to the border of Mozambique, Killer and Amos were flown in as part of a four-strong team including South African Defence Force personnel. While trying to find a spoor to track, shots were fired and, in the confusion that followed, Killer and Amos became separated from the main group. 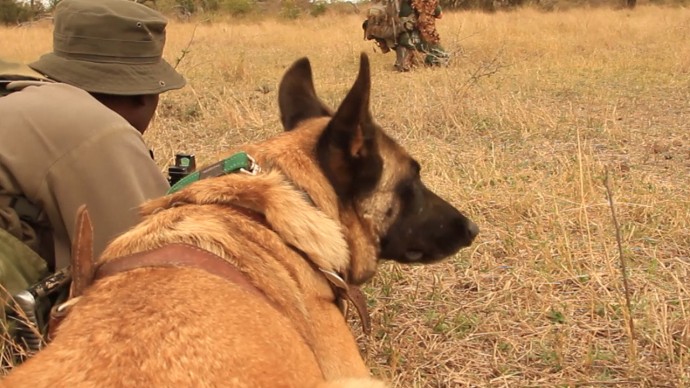 Killer picked up a spoor to track the suspects, giving him and Amos the upper hand over the poachers. As the determined dog and handler followed the suspects to the bottom of a cliff, they spotted someone just in front of them. Amos shouted to the suspect to surrender, but heard a heavy calibre rifle shot and the bullet passing close to his head. He returned fire to save his and Killer’s lives before apprehending two other suspects.

Thanks to Killer’s tracking skills, 115 arrests have been made to date, but the fight against poaching continues.

Killer’s handler, Amos Mzimba, said: “It is an honour to have Killer by my side. It means a lot that he has been recognised for his skills and assistance in tracking and arresting poachers. Thanks to him, we are arresting more poachers, but there is a lot more to be done if we are to save the rhino from extinction. Killer is invaluable in achieving that.” 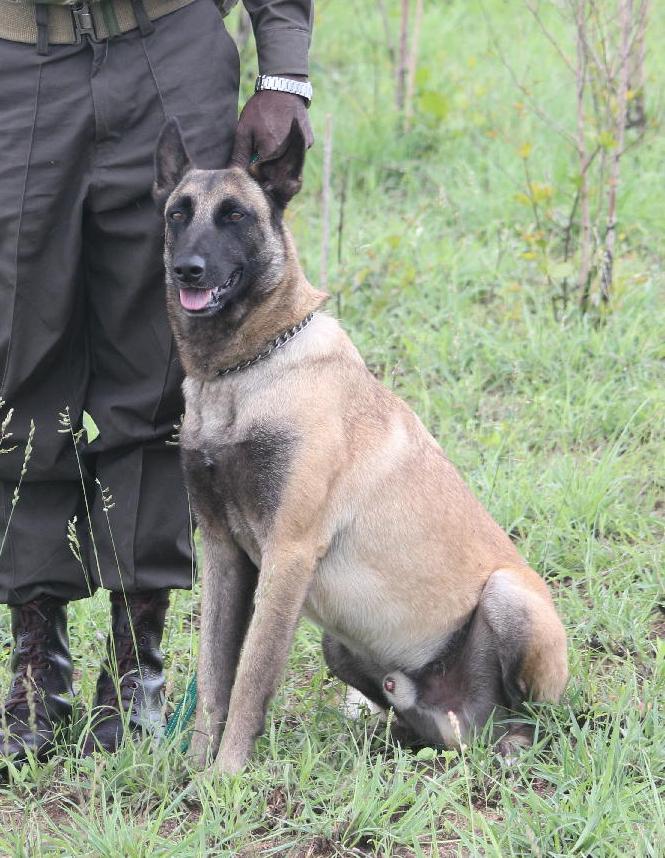 PDSA Director General, Jan McLoughlin, said: “The PDSA Gold Medal recognises extraordinary acts of courage and dedication in life-threatening situations, and Killer is indeed a worthy recipient. His contribution to saving the rhino population has been truly remarkable. His track-record is astounding and we are honoured to recognise his fantastic work in this way.”

Killer’s award was formally presented by Ricky Gervais, who said: “Killer does fantastic work in the Kruger National Park. Rhino’s are wonderful creatures that are being killed in their hundreds by these poachers. Killer and his colleagues are fighting back. He helped capture dozens of poachers in the last year alone, thanks to his amazing courage and dedication. He’s making a huge contribution to rhino protection in South Africa.” 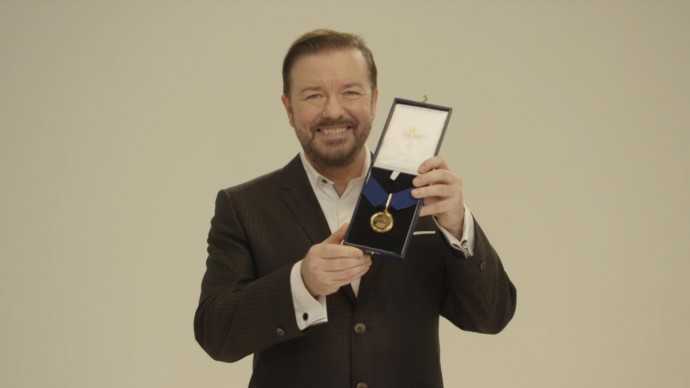 Bruce Leslie of the Environmental Crimes Investigations Unit, nominated Killer for the PDSA Gold Medal. He said: “To save the rhino from extinction, someone has to stand between them and the poachers and that job falls to our rangers. Killer’s sense of smell is absolutely amazing at tracking people. He makes us more successful and increases our arrest rate. All of our dogs carry out incredible work on a daily basis, but Killer stands out for his tenacity and dedication so I’m enormously proud that he has received the PDSA Gold Medal.”

Since its inception in 2001, the PDSA Gold Medal has now been awarded to 24 heroic animals. Recipients include UK police explosives search dogs Vinnie, Jake and Billy for their lifesaving work in the aftermath of the 7/7 terrorist bombings in London, in 2005.

For more details about the PDSA Gold Medal and its previous recipients go to www.pdsa.org.uk/goldmedal.

Why dogs love the Lake District and you will too…

There are so many reasons why the Lake District makes such a great place for you and your dog to stay. First of all, there is the fabulous scenery, the amazing mountains to trek, the dog-friendly towns to visit, the endless variety of lakes to circumnavigate, the castles and stately homes to see and the fabulous dog-friendly steamers […]

Our lovely friends at Forthglade have shared this fabulous tasty recipe for some homebaked pumpkin dog treats with us, and we couldn’t wait to share it with you! The recipe makes 20 medium-sized bones Oven: 200°C, 15 minutes Ingredients 200 grams tinned pumpkin puree (make sure this is plain, tinned pumpkin puree and not dessert […]

PetsPyjamas’ own Heidi had a puppy shower to remember! Check out the party photo gallery…