The Pet Inspectors at Sheepscombe House

An invitation to a big party in a grand manor house in Gloucestershire, with food served up by a MasterChef finalist (and so the prospect of some delicious under-the-table treats)? Who could refuse? Certainly, not Heidi and I.

Our hosts for the weekend, Karen and Olaf, had invited several friends including our owners Rory and Denise, Denise’s daughter Camilla, and Camilla’s boyfriend Hugo. It was Camilla’s birthday on Saturday, which promised to make the weekend extra special. 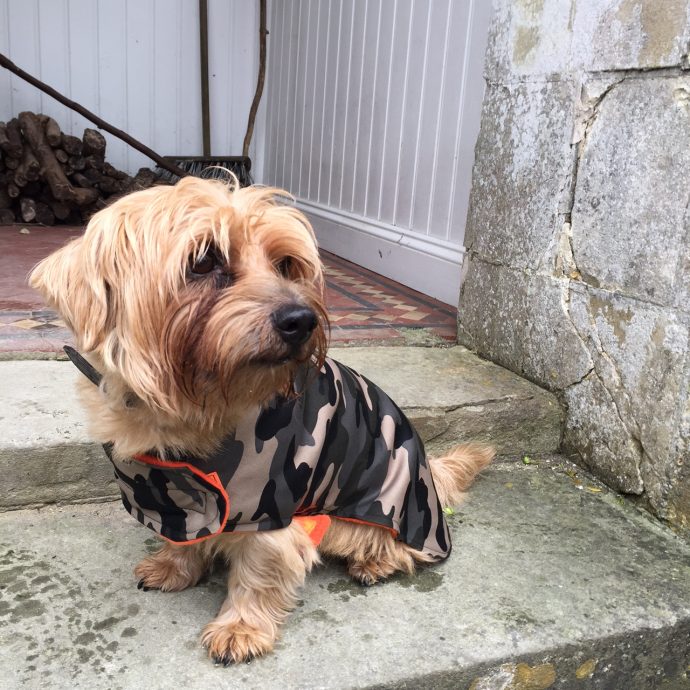 We set off on Friday evening, Heidi and I wearing our very smart Dogs & Horses collars and leads. Packed away in the boot of the car were our new personalised PetsPyjamas camo coats and our Wag ’n’ Go travel duffel bags containing our bowls, food and blankets. 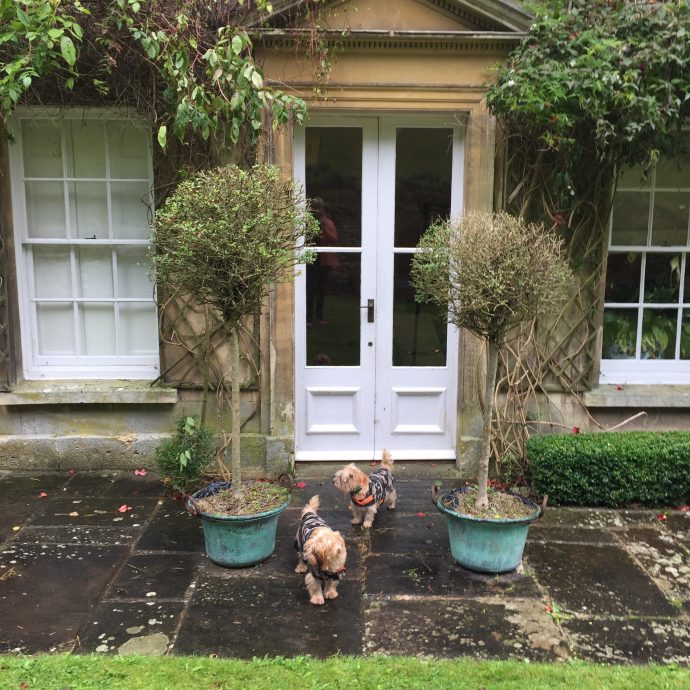 After a couple of hours on the road, we arrived at Sheepscombe House, the most magnificent Georgian manor, and after a little sniff around the grounds we were all welcomed inside. After everyone was introduced, they all had a late pasta supper with champagne in the conservatory while we dogs had a late-night snack and relaxed in the huge kitchen, warmed by not one but two cooking ranges – we wish our kitchen at home was this big and this cosy! Then our owners were shown to their gorgeous four-poster bedroom. 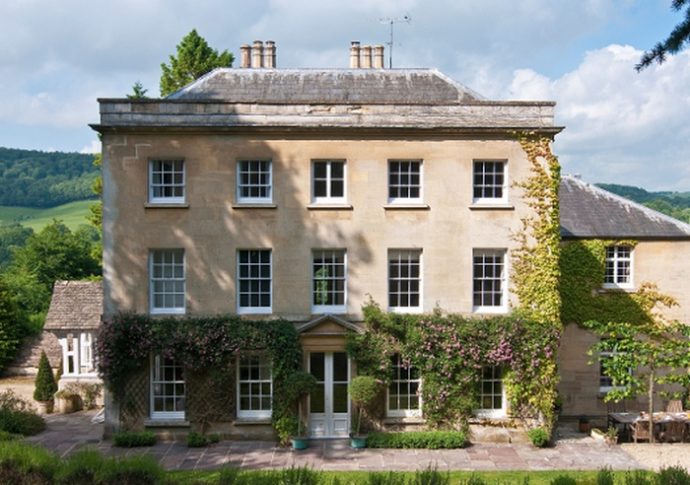 Next morning, after a leisurely breakfast with our hosts in the conservatory, we had a game of catch with Hugo in the grounds and then met the alpacas in the field next door. The plan was for a trip to the farmers’ market in Stroud to buy some lovely treats for an alfresco lunch in the garden. We decided to stay behind in Sheepscombe with Olaf, and he took us on a lovely sniff-tastic walk exploring the smells, sights and sounds of the Cotswold countryside around the village, which is set in a beautiful wooded valley. 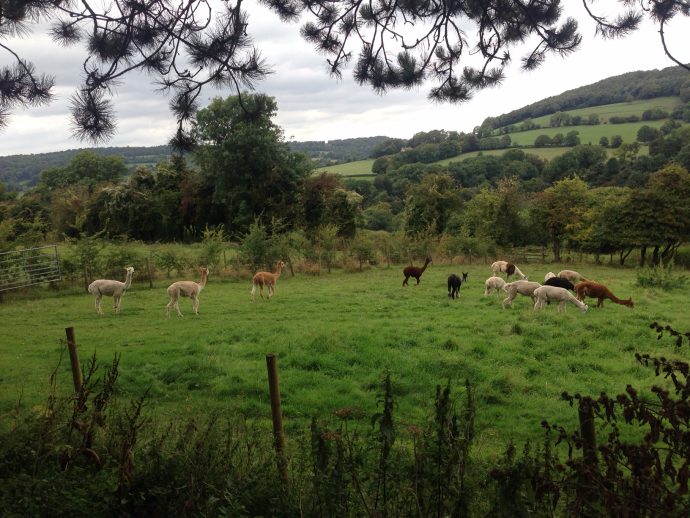 After lunch we were on ball girl and ball boy duties as Karen and her friend Helen played tennis with Rory and Denise – the only trouble was that Heidi kept running off with the ball! Heidi and I and the players thought the house’s all-weather court was excellent (apparently, the swimming pool next to it is superb too, although we weren’t allowed in there). After the game, we joined the party for a 15-minute walk to the local pub, the Butchers Arms in Sheepscombe, where we met lots of really friendly locals as we sat outside, and Heidi and I were offered water and treats. 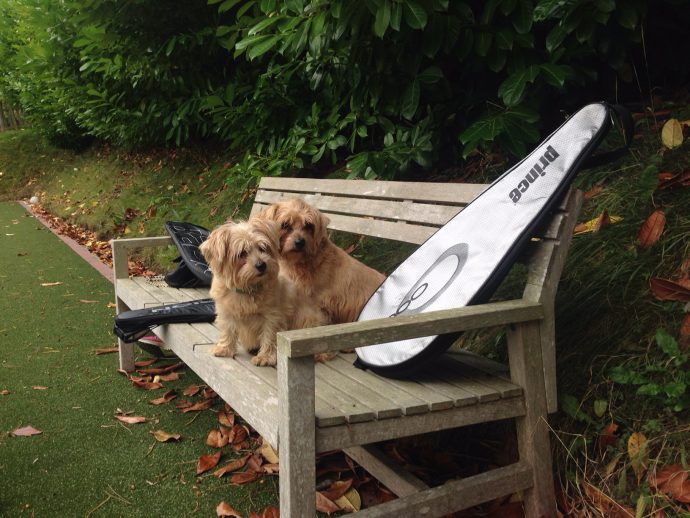 Later we helped Camilla open her presents, and had another run around the grounds with Hugo. Camilla then decided that she would like her hair done for the evening celebrations – and amazingly we found a dog-friendly hairdresser at nearby Painswick. By now everyone was looking forward to the evening meal – MasterChef 2012 finalist Andrew Kojima, known as Koj, would be arriving shortly to prepare everything. 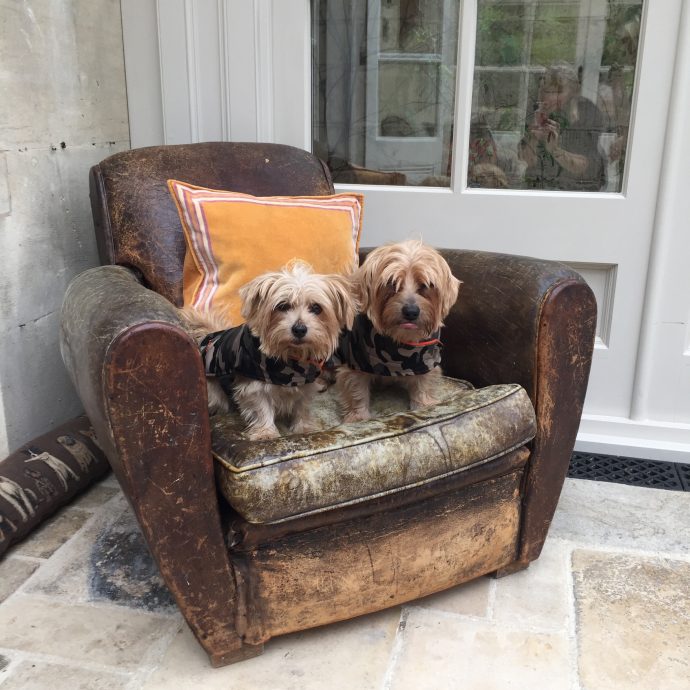 Koj, who lives in Tetbury, not too far away, had devised a special seven-course celebratory dinner which even accommodated Camilla’s pescatarian preferences. The meal included gorgeous canapés, served up in the beautiful sitting room along with more champagne. Then there was courgette and basil panna cotta, goat’s cheese with beetroot and parma ham, cured salmon, and the most delicious rack of lamb with celeriac and lots of trimmings.

Dessert was apples with walnut crumble ice cream with cinnamon donuts, and a delicious cheese course followed. The meal was finished off with Earl Grey and yuzu truffles, and chocolate orange fudge. These were apparently divine – of course Heidi and I weren’t allowed any, though we did get to sample most of the other things that had been served up, and we agreed with those above the table that the meal had been a great success. We’re hoping our owners book Koj to cook again for future celebrations. 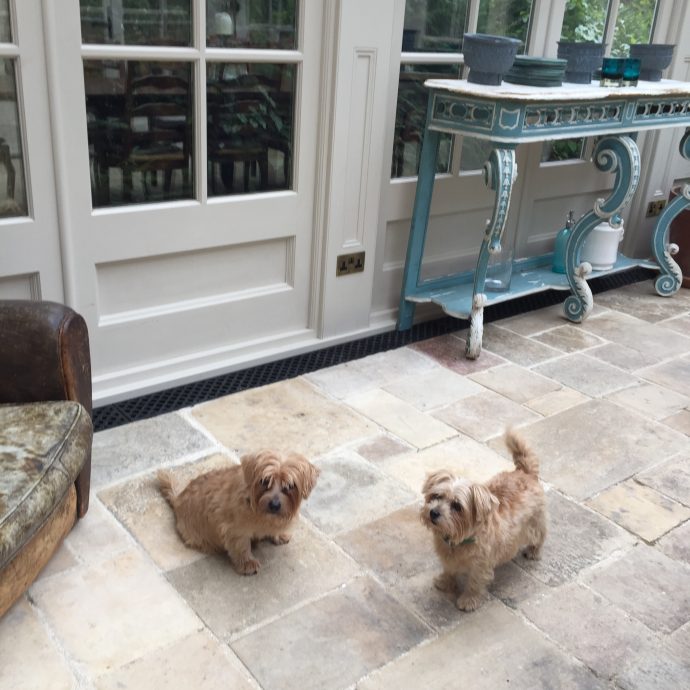 Sunday started with breakfast in the conservatory – local sausages and eggs, freshly laid, bought the day before at the farmers’ market, and bacon Olaf had brought from Borough Market in London. Heidi and I had some sausage, which we really enjoyed, before more games running around in the grounds chasing balls and other toys – we wish we had a huge garden like this at home! 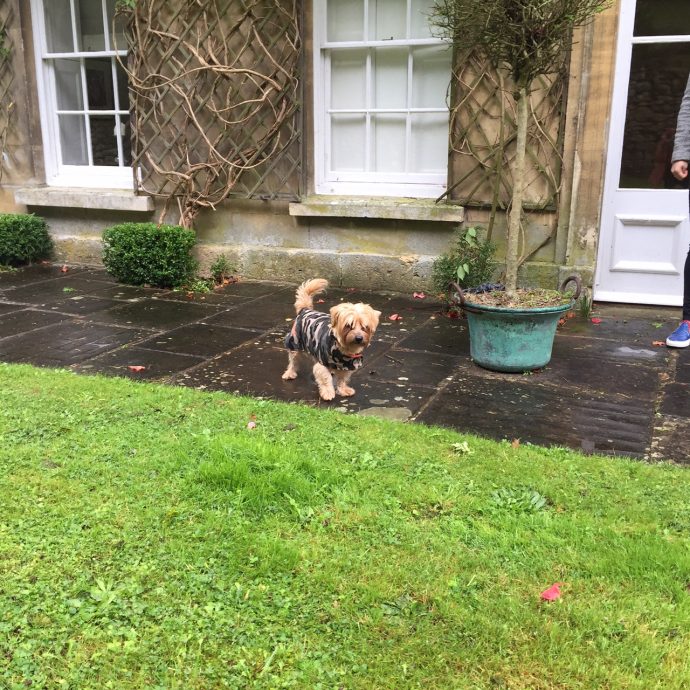 After breakfast, we took a lovely 35-minute walk to the small town of Painswick. It was a really gorgeous stroll through the valley, along the road but with hardly a car in sight, passing beautiful old mills and houses. It was the day of the annual Painswick Feast, an ancient celebration around town’s beautiful church, surrounded by a graveyard filled with prettily shaped yew trees, with lots of stalls showcasing local crafts, foodstuffs and traditions. 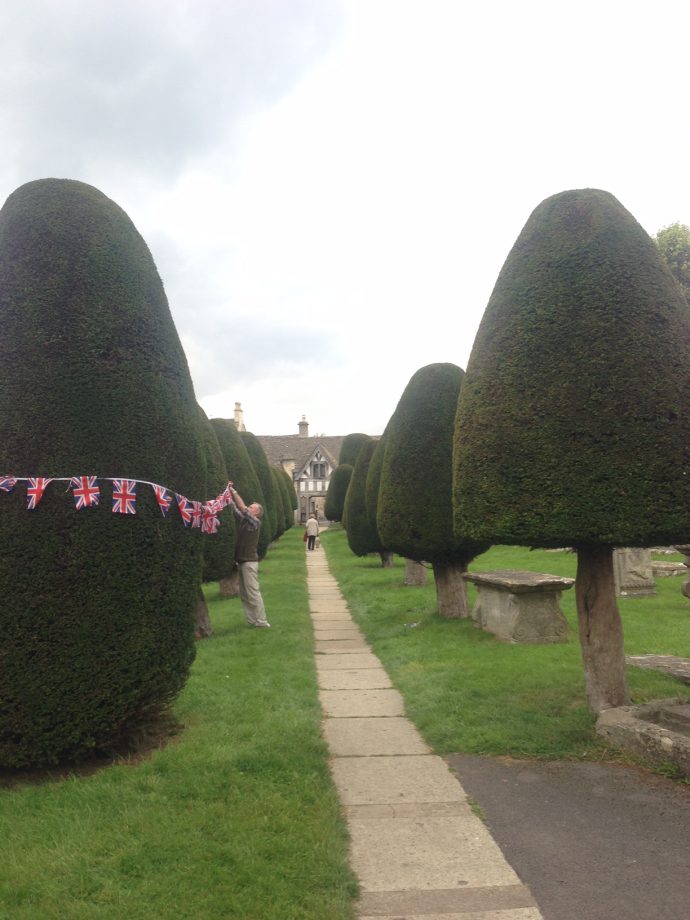 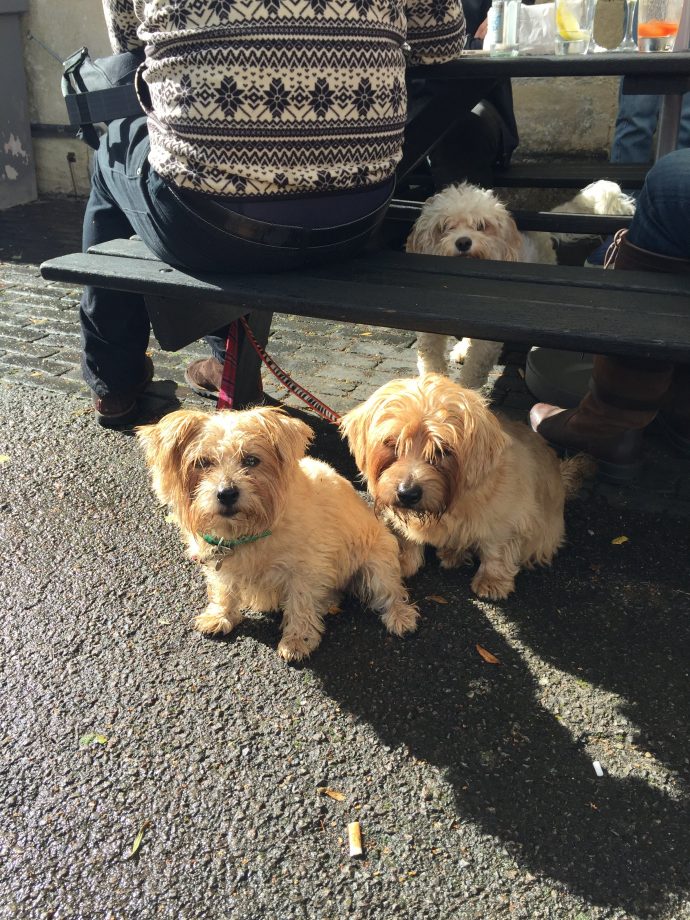 While we loved most of the stalls (especially the one with dog food and treats), we did get a little nervous around the one selling Puppy Dog Pies, until we were assured that although these were based on a local legend about dogs being used as a pie filling, no canines were harmed in making the modern-day versions. 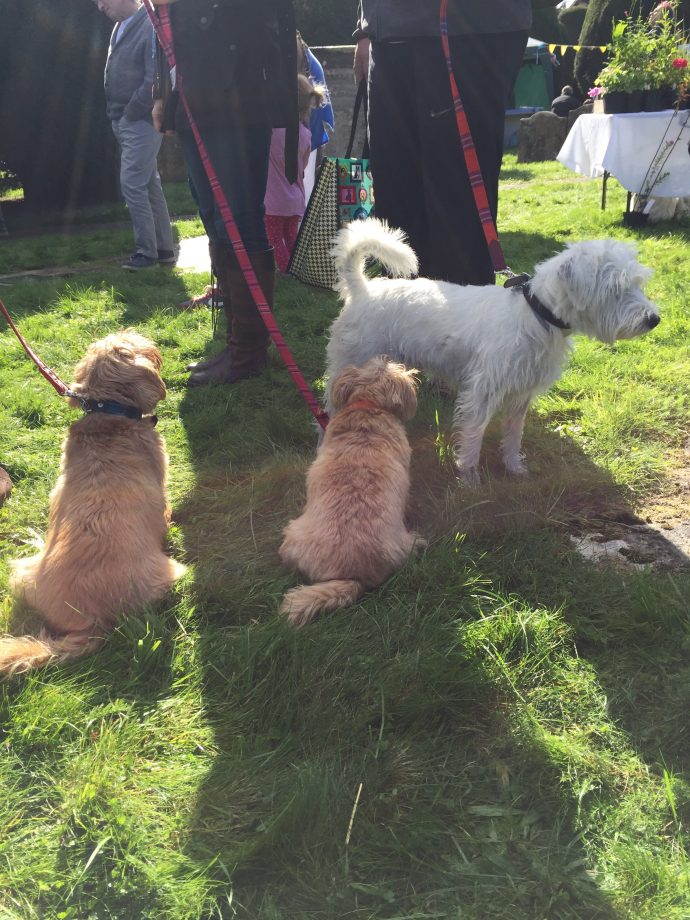 We were just about ready to walk back to Sheepscombe when – after a weekend of lovely sunshine so far – the heavens opened with a sudden heavy rain shower. We retreated to the Falcon Inn until the rain stopped, and while there it was decided that the pub and Painswick were so nice that we would come back in the evening for dinner (in the cars, this time, not walking). Going by the little bits sneaked to us under the table, Heidi and I can highly recommend the food there!

Next morning, after another leisurely breakfast, it was time to pack up and depart, but before leaving the area we stopped for lunch at another pub nearby that had been recommended, The Woolpack Inn at Slad. Over 200-years old, it was ‘Cider with Rosie’ author Laurie Lee’s local, and he is buried in the churchyard just across the road.

The pub, set in the stunning Slad valley, serves up delicious local food. It was also very dog-friendly. We’d like to have spent more time sniffing around the valley exploring, but after a walk up to the churchyard to see Laurie Lee’s grave it was time to go home. Heidi and I had such a fun weekend living like hounds of the manor. We can’t wait for our next trip… 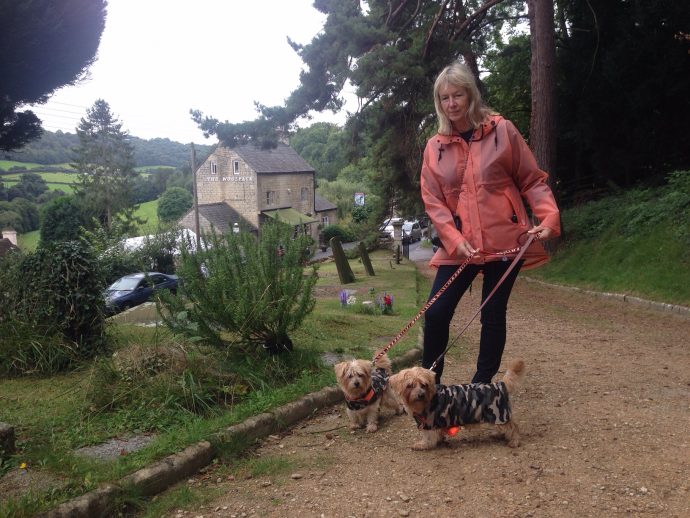 If you would like to enjoy your own dog-friendly break at the Sheepscombe House – pick up your bone and call our Pet Concierge on 0203 642 3162 or email us at woof@petspyjamas.com

And remember when you book your dog-friendly holiday through PetsPyjamas you’ll receive a free personalised Pet Travel Kit plus PetPoints to spend on pet accessories or to spend on future bookings.

Here at PetsPyjamas we have Kleenex at the ready for the launch of the film version of War Horse, in cinemas from this Friday.