Why We Love… Spinone Italiano 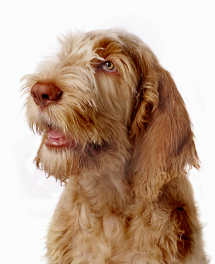 Top Five Reasons Why You Should Own A Spinone Italiano?

The Duchess of Northumberland (read our Me and My Pet Interview)

Spinones are pretty healthy dogs and have great laid-back temperaments. If you are thinking of getting a Spinone then remember the following:

1.     Weight – Spinones are big dogs that love to run around smelling everything and need plenty of exercise; failure to match their dietary intake to adequate exercise can result in some overweight dogs.

2.   Hip dysplasia – hip joints fail to develop properly leading to arthritis. Always make sure that your puppy comes from parents that have had their hips X-rayed and scored by The British Veterinary Association / The Kennel Club Hip Scheme. The breed mean score is between 10 – 15 so try to find parents with lower scores than this.

3.   Elbow dysplasia – incomplete development of the surfaces of the elbow joints leading to arthritis. Again always make sure that your puppy comes from parents that have their elbows X-rayed and scored by the BVA / KC Elbow Scheme. Try to find parents with scores of 0:0 indicating no evidence of the disease.

4.     Hygiene – as with all dogs with wire coats, sensible attention is needed to make sure that the coat doesn’t get tangled and matted. Pay particular attention to their beards which can collect food debris after meals.

We love these adorable Bichon Frisés!

The dog equivalent of a powder puff – here are some of our favourite facts on the bright and bubbly Bichon Frisé.

5 facts about cats that will make you smile

And not forgetting our feline friends – here are five fascinating facts about cats to brighten your day.

PLAY: Top Dog-friendly Things to do in Wales

With a breath-taking coastline, endless countryside and bustling cities, Wales has it all! Here are the top things you and your canine companion can do.