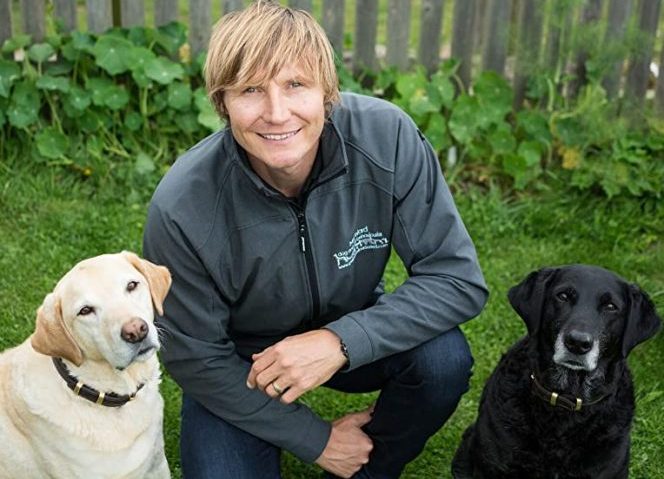 We spoke to dog behaviourist Mat Ward as he tells us about his lovely doggys Pepper and Suki, some of his dog training tales, and his new book ‘What Dogs Want‘.

Mat Ward is a dog behaviourist who champions reward-based training and has helped thousands of pets and owners improve their wellbeing over the past two decades. His skills were tested to the limit when he took on the challenge of teaching a rescue dog to fly a plane for the TV show Dogs Might Fly. Mat lives in New Zealand with his wife, children, two cats and two dogs.

Tell us about your doggys!

“So I have two girls, Pepper and Suki. Pepper is a curly coat Retriever-Labrador cross. She’s 11, although she thinks she’s about 11 months! She’s a bit of a lunatic – loves to chase things… the ball is her passion! Suki is her daughter, she’s seven… she’s three-quarters lab, and a quarter curly coat. She actually had a cleft palate when she was born so she couldn’t suckle properly to get the milk… so we hand fed her and she stayed with us.”

“Goofy, cuddly and foodie! They love their food, but I guess that’s what you’d expect with a bit of a labrador in them.”

I hear you’re living in New Zealand, wow! Do Pepper and Suki have a favourite place to visit in NZ?

“I’d probably say their favourite thing is when they’re in a new place – a novel area where they haven’t been before. Their scenting goes into overdrive…they just love to explore! I’d love to get inside their head sometimes and understand all the factory info, smells etc that they’re getting and what they’re learning… because they seem pretty fascinated by it all!

As far as their regular haunts go, there’s a swimming hole and a stream near here, and they love to get in there. Pepper will retrieve a ball for hours, whereas Suki’s more of a paddle about and do few circles, and then get out and sniff around the banks and stones etc.

We were actually in Scotland for many a year but now we’re in New Zealand, and Suki’s actually swimming a bit more because the water’s a little warmer over here!”

If you were to take your dogs on a dog-friendly holiday here in the UK, where would you go?

I’d have to say East Lothian in Scotland, East of Edinburgh. We lived there for 14 years, and I couldn’t recommend a more dog-friendly place…with woodlands, amazing beaches, often blue skies – it’s a lot dryer out there, and lots to see! So that would be the best dog spot for me.

Being a dog behaviourist must be such a rewarding job – do you have any stories you’d like to share?

Probably one of the most interesting and challenging training cases I’ve been involved in was for the Sky program ‘Dogs Might Fly’, where I trained a dog to fly a plane. Not to take off or land or operate the radio or all those other critical things, but to keep a steady altitude, turn left or right…on cue…with the ultimate aim of doing a figure of eight. 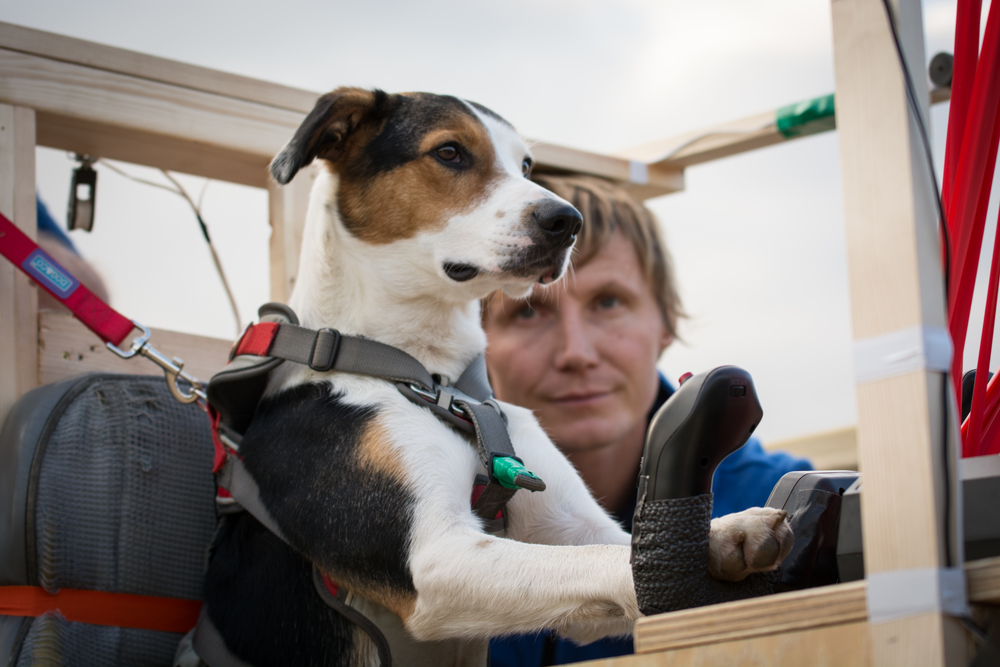 What would you say is the most unusual behavioural problem you’ve had to deal with?

One that springs to mind is a dog who started to walk backwards in the house. He’d be walking along fine then he would turn around and walk backwards for a number of metres, and then turn around and walk normally. Otherwise, he was a young, healthy, happy dog. He got initially tested for neurological function and had a lot of veterenary specialist advice, and then was referred on to me to provide a behavioural perspective to try and figure out what might be going on.

In the end, we actually figured out that he had a cone of shame after an operation he’d had… the problem was, when he went through narrow areas the cone would hit say the edge of the sofa…and it was quite nerve-racking for him. And so he learnt with his cone that if he backed through areas that were narrower than a about a metre or so that he wouldn’t get that bang.

The cone came off but he actually continued that behaviour, and because the cone wasn’t on for long the owner didn’t make that link…but we managed to make that link and to essentially teach him that he was safe walking through those areas and everything was fine. But yeah, on the face of it, an unusual one!

Tell us about your book…

I’d like to think it’s a really accessible, fun and informative book. It’s filled with illustrations and lots of little tippets of information…but essentially, after working with dogs for 25 years, everything that I’ve learnt and I think is critical and important to know as a dog owner, I’ve put in there…in a way which is fun, enjoyable, and accessible.

It’s not too overwhelming with lots of text… you can pick it up, read a page, or read 10 pages. The illustrator Rupert Fawcett did an amazing job, and to see all those ideas which I know are important, there on the page, in a way that hopefully will be enjoyable for everyone to read…it’s great. 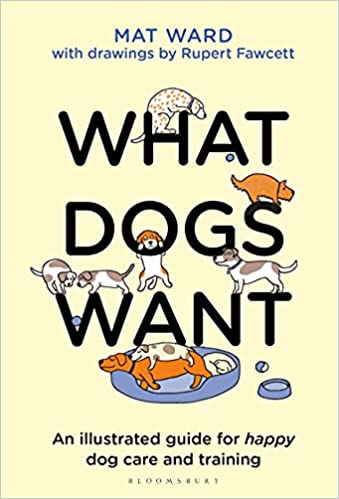 What made you want to turn your dog behaviourost epxertise into a book?

There’s so much information about dog training out there, whether it be on the internet, someone you bump into out on a dog walk, your uncle Bob, friends and family or whoever, everyone’s got an opinion on dog behaviour. Some of it’s great…some of it’s terrible… and there’s a lot in between! So it’s hard for a lot of people to sort the wheat from the chaff as far as that information goes.

And so I wanted to write a book that essentially gave dog owners a toolkit for everything they needed to know, without it being too complex – because it really doesn’t need to be! And I think i’ve achieved that. I’m really excited about it, and I think it’s suitable for everyone, whether you’ve never owned a dog before to more experienced dog owners, I think everyone will get something from it.

What was your favourite chapter to write about?

Is there a particular extract of the book you feel dog owners find interesting or surprising?

There’s a section called ‘The Tail Tells a Tale’ and it’s about the dogs tail and what it means. A lot of people think a wagging tail means a happy dog, but it doesn’t necessarily! Unless it’s a propeller, hellicopter type wag where the bum does a circle; but just a wagging tail doesn’t mean a happy dog and I break that down a little more.

For example, how high the tail is held, where it’s held, speed of wag… all these things tell us something about how our dogs might be thinking and feeling.

Would you consider writing another book on something similar?

Absolutely! It was challenging at times to clarify things in a small space, nice and concisely with just a few sentences for some important topics. But now that it’s all there, with so many, what I think are, really important tips, it’s really rewarding to see. I’m really looking forward to it being out there and hearing people’s feedback on what they’ve learnt and found useful!

It’s one thing helping people every day with their dog’s behaviour, but it’s another to have a book out there with hopefully thousands of people reading it, and helping them to get on the best track possible as dog owners!

Keen to learn more about our furry friends?

Check out our blog on ‘How to Speak Dog‘; featuring expert extracts taken from Mat Ward’s book ‘What Dogs Want‘. From the meaning of a bark to the wagging of a tail, Mat breaks down how your dog’s brain really works; allowing us understand our pooches a little more and above all, become better dog owners. 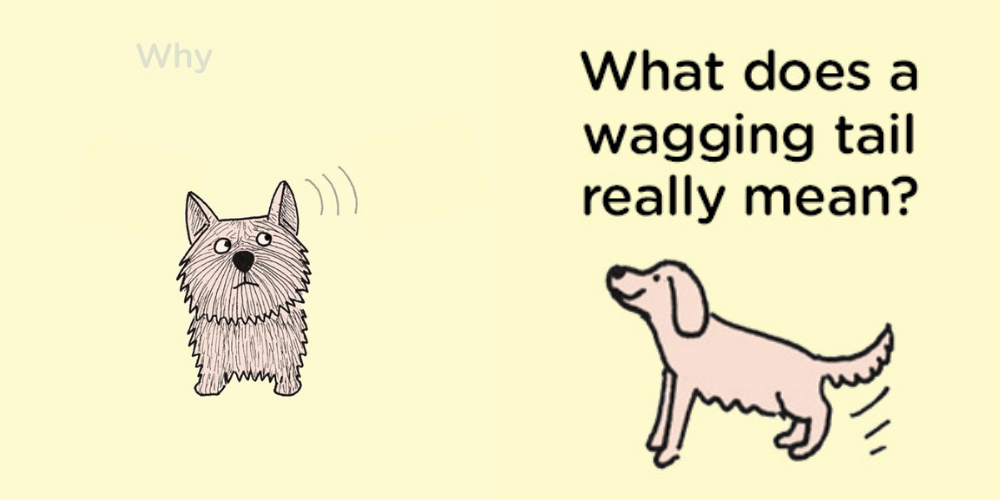 Get 10% off all travel gift vouchers this weekend

We had the best time at the @thedogvine Pup’s Pa

✨ UPDATE: WE HAVE ANNOUNCED OUR WINNER @bailey_t

Hello Payday 💷 Get up to 25% off all dog-friend

🎃Treat yourself to a dog-friendly getaway today

Processing…
Success! You're on the list.
Whoops! There was an error and we couldn't process your subscription. Please reload the page and try again.
Type to search or hit ESC to close
See all results