A retired US Marine Corps dog who protected the lives of allied troops in Iraq and Afghanistan has been honoured with the PDSA Dickin Medal – the animal equivalent of the Victoria Cross. 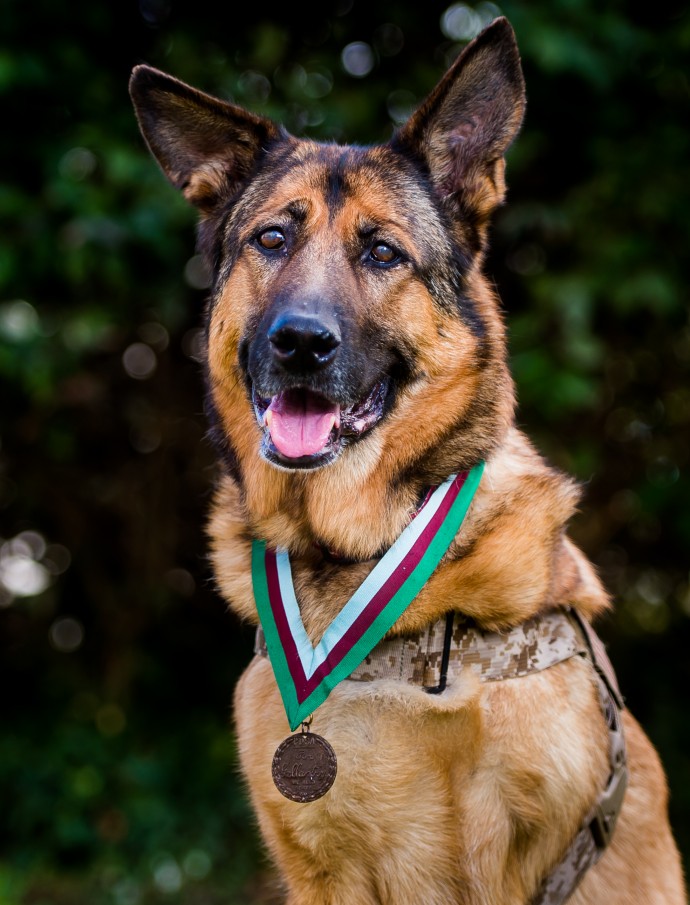 Retired US Marine Corps dog Lucca receives the PDSA Dickin Medal for gallantry during her six year career at the Wellington Barracks, London on the 05/04/2016. Photo: David Tett

The 12-year-old German Shepherd, who lost a leg while on duty, successfully completed over 400 separate missions during six years of active service. Her heroic actions were recognised by the UK’s leading veterinary charity, PDSA, at a ceremony at Wellington Barracks, London (Tuesday 5 April) which was attended by Lucca and her owner, Gunnery Sergeant (GySgt) Christopher Willingham.

The famous medal was instituted by PDSA’s founder, Maria Dickin, CBE, in 1943. It is the highest award any animal in the world can achieve while serving in military conflict. Lucca’s is the 67th PDSA Dickin Medal to be awarded and she is the first US Marine Corps dog to receive the esteemed honour. 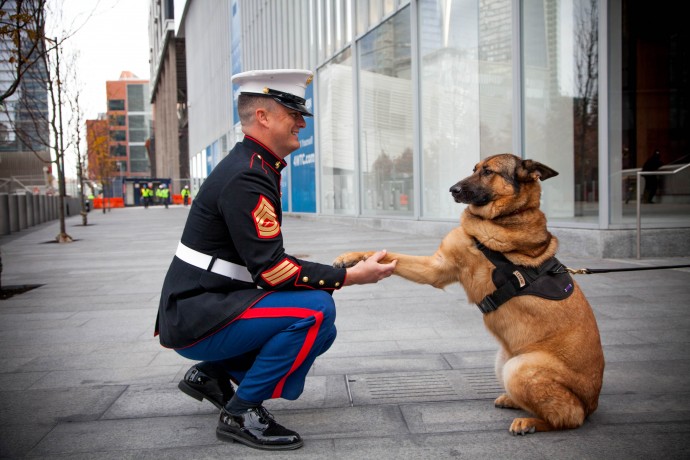 Lucca’s skills as a specialised search dog, who was trained to sniff out munitions and explosives, protected the lives of thousands of allied troops, according to the US Marines. Her success was such that there were no human casualties during any of her patrols.

On her final patrol, on 23 March 2012, Lucca discovered a 30lb improvised explosive device (IED) and as she searched for additional IEDs, a second device detonated. She instantly lost her front left leg and suffered severe burns to her chest. Corporal (Cpl) Juan Rodriguez, her handler on the mission, administered life-saving first aid to Lucca. Through all of her emergency treatment and recovery, Cpl Rodriguez never left Lucca’s side. 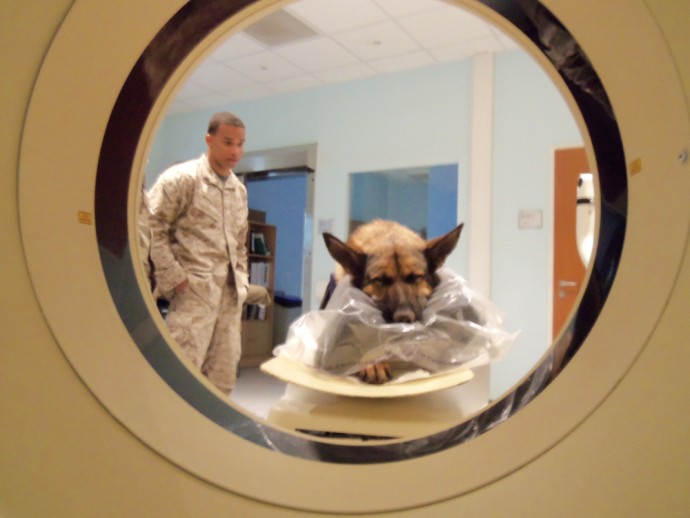 After training together, Lucca and GySgt Chris Willingham served together for two tours in Iraq. In 2007, they conducted clearing operations along the Tigris River, South of Baghdad. In 2008, they conducted counter insurgency operations around Diwaniyah.  Lucca made a number of finds; including weapons caches, IEDs and bombs.  Also, she was directly responsible for the apprehension of four insurgents.

In November 2011 Lucca and her new handler Cpl Juan Rodriguez were selected from 60 Military Working Dog teams to deploy to Afghanistan in support of the Marine Expeditionary Force.

Lucca and Cpl Rodriguez led 75 patrols in Helmand Province; an area heavily laden with IEDs. They were at the front of the patrols to ensure the safety of those behind them. Despite being targeted with gunfire on several occasions, they successfully continued their search for IEDs. 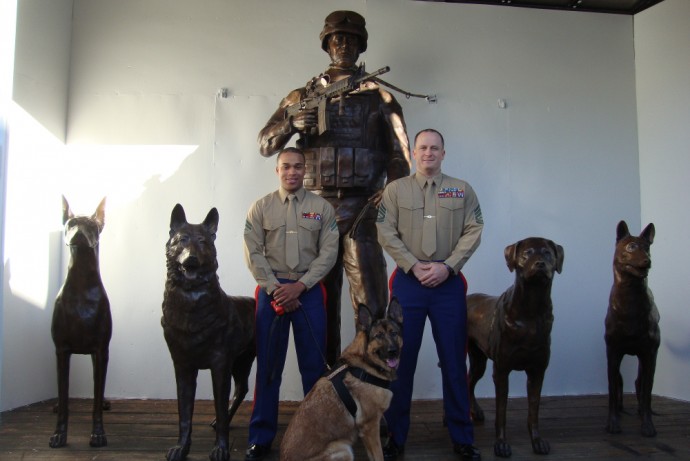 On 23 March 2012, Lucca and Cpl Rodriguez were ahead of a foot patrol when she signalled on a haystack in a poppy field where a weapons cache was discovered. Resuming the patrol, Lucca took the lead and later alerted the patrol to a 30lb pressure plate IED, which was successfully located and cleared.

Resuming their patrol, Cpl Rodriguez sent Lucca to clear a nearby path when a 30lb pressure plate IED detonated underneath her, causing the immediate loss of her front left leg and severe burns to her chest, neck and head. Cpl Rodriguez applied a tourniquet to Lucca’s leg and bandaged her burns, while a fellow patrol member called in a Medical Evacuation (MEDEVAC) team.

Cpl Rodriguez said: “The explosion was huge and I immediately feared the worst for Lucca. I ran to her and saw her struggling to get up. I picked her up and ran to the shelter of a nearby tree line; applied a tourniquet to her injured leg and called the medics to collect us. I stayed with her constantly throughout her operation and her recovery. She had saved my life on so many occasions – I had to make sure that I was there for her when she needed me.” 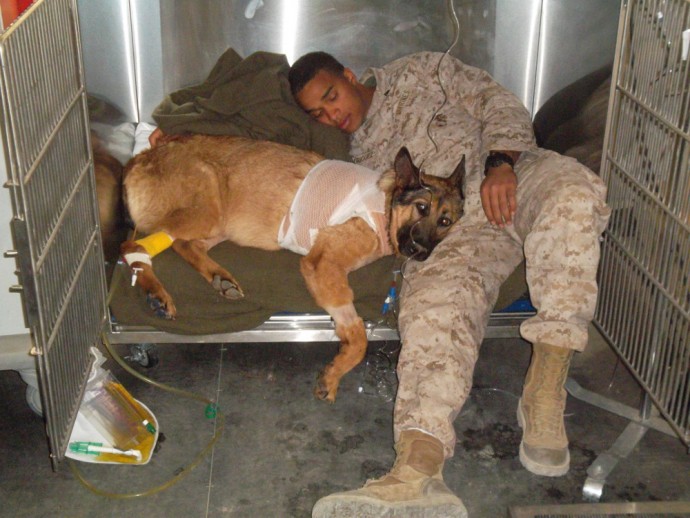 Miraculously, none of the soldiers in the patrol were injured in the blast which injured Lucca.

Lucca was evacuated from Afghanistan to Germany and then to Marine Corps Base, Camp Pendleton, California, to complete her recovery. Cpl Rodriguez stayed at her side throughout each move – even choosing to sleep next to Lucca as she recovered.

Within ten days of her injury, Lucca was up and walking. 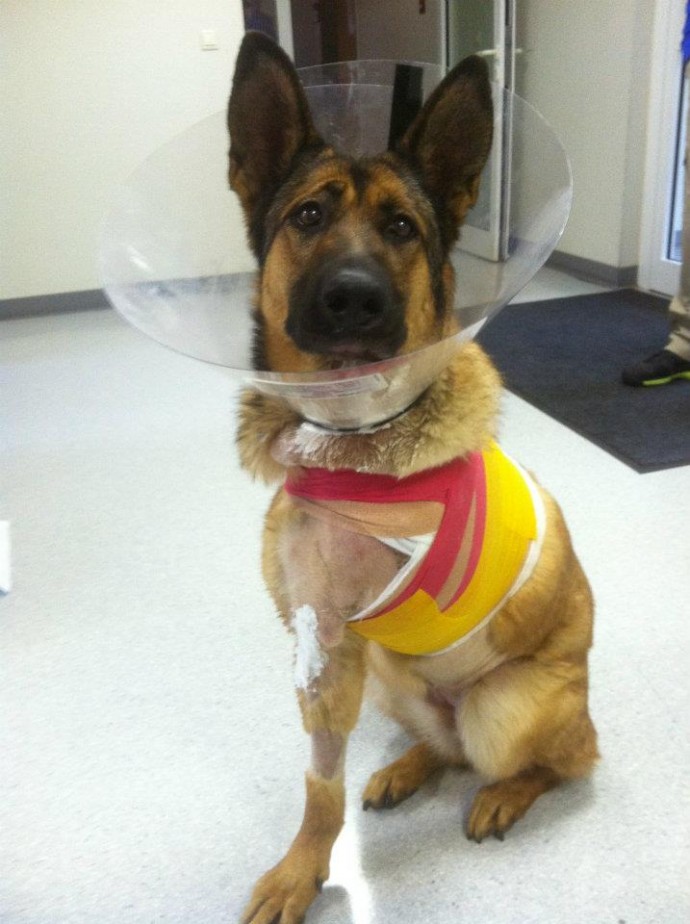 Cpl Rodriguez continues: “Through all of her treatment and despite the pain she was in, her temperament never changed. Her fighting spirit was plain to see and I was so proud of how quickly she recovered.”

While she was rehabilitating, her adoption paperwork was submitted to retire her officially from active service and live with Chris Willingham and his family in California.

Lucca’s PDSA Dickin Medal was presented by the charity’s Director General, Jan McLoughlin. Jan said: “Lucca’s conspicuous gallantry and devotion to duty makes her a hugely deserving recipient of the PDSA Dickin Medal. Her ability and determination to seek out arms and explosives preserved human life amid some of the world’s fiercest military conflicts. 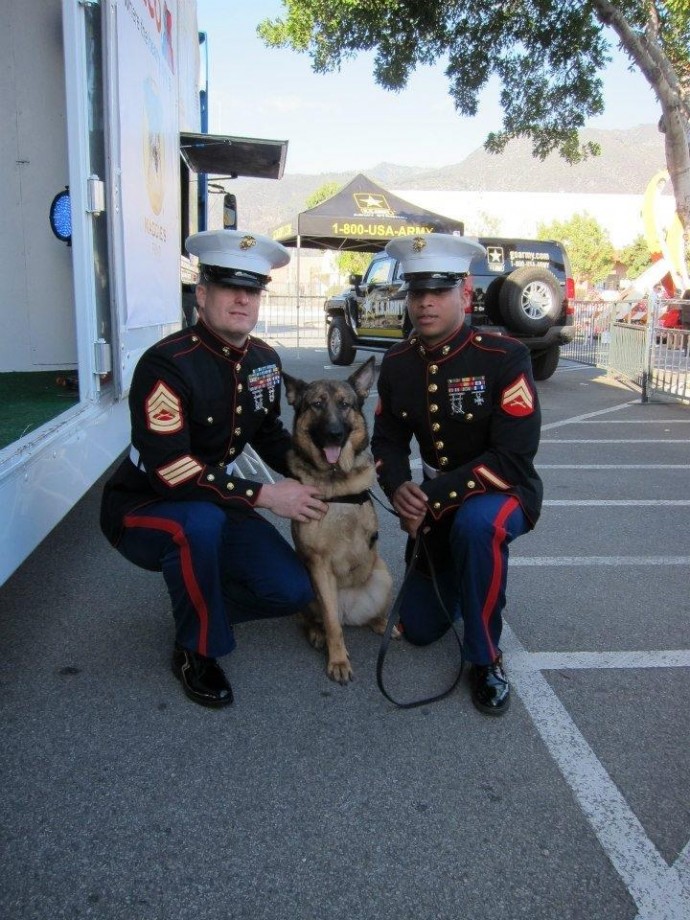 “I am thrilled that both Lucca and Gunnery Sergeant Willingham have made the journey to London to receive this very special award.” 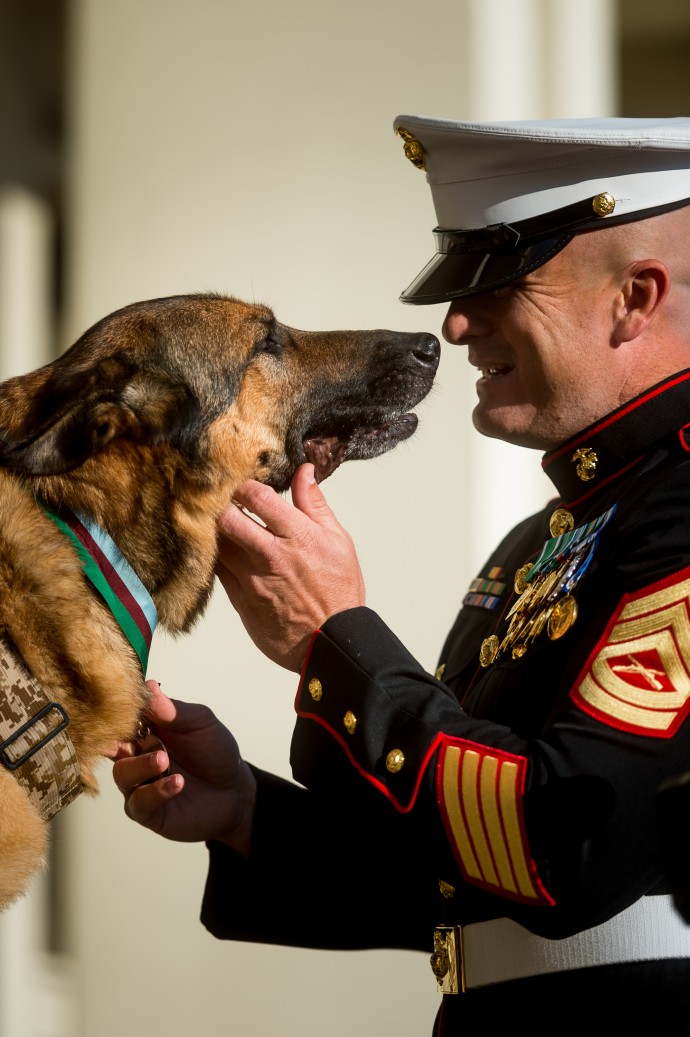 Retired US Marine Corps dog Lucca receives the PDSA Dickin Medal for gallantry during her six year career, with her owner Gunnery Sergeant Christopher Willingham at the Wellington Barracks, London on the 05/04/2016. Photo: David Tett

Gunnery Sergeant Chris Willingham said: “Lucca is very intelligent, loyal and had an amazing drive for work as a search dog.  She is the only reason I made it home to my family and I am fortunate to have served with her. In addition to her incredible detection capabilities, Lucca was instrumental in increasing morale for the troops we supported. In between missions, I took the searching harness off and let her play and interact with the troops.  Due to her personality, demeanor and proficiency as a search dog, Lucca made friends wherever she went. Today, I do my best to keep her spoiled in her well-deserved retirement.”

“Even when Lucca was injured, her good temperament and gentle nature never faltered. She has become an inspiration to everyone she meets and I am so very proud to see her decorated with this prestigious award.” 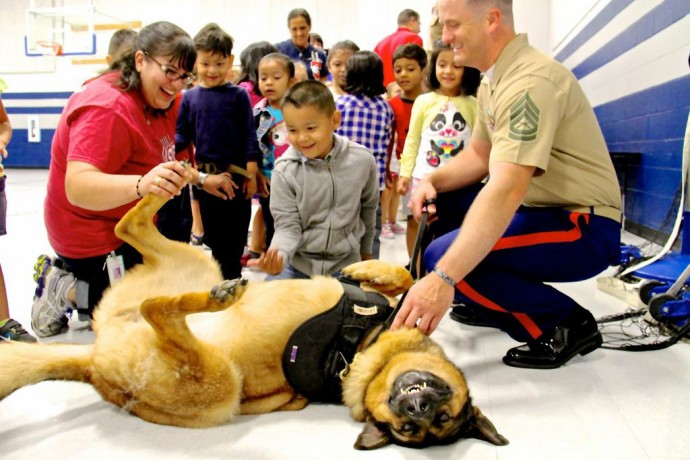 Lieutenant Colonel Abby DuBaree from the Royal Army Veterinary Corps said: “Lucca’s story has become famous in the US and I am so pleased that PDSA is honoring her contribution to the military campaigns in both Iraq and Afghanistan. Lucca’s efforts and the expert work she carried out for allied forces deserves full credit and recognition. I know that every Marine and soldier that served alongside her will be thrilled to see her receive the PDSA Dickin Medal.”

Lucca’s award will bring the total number of PDSA Dickin Medals awarded to animals in military conflict to 67. Since the introduction of the Medal by PDSA founder Maria Dickin, CBE, in 1943 it has been awarded to 31 dogs (including Lucca), 32 World War Two messenger pigeons, three horses and one cat.

PDSA is the UK’s leading veterinary charity, treating nearly 500,000 pets annually across its 51 Pet Hospitals and 380 Pet Practices. The charity strives to improve all pets’ lives through education, preventive care and emergency treatment and touches the lives of more pets and owners that any other animal charity. For more information visit www.pdsa.org.uk.

Grumpy Cat has competition in Japan

It’s time for Grumpy Cat to step aside, there is a new scowling kitty in town and her name is Koyuki…

We chat to veterinary nurse and blogger Stephanie about life with her brood of spaniels.