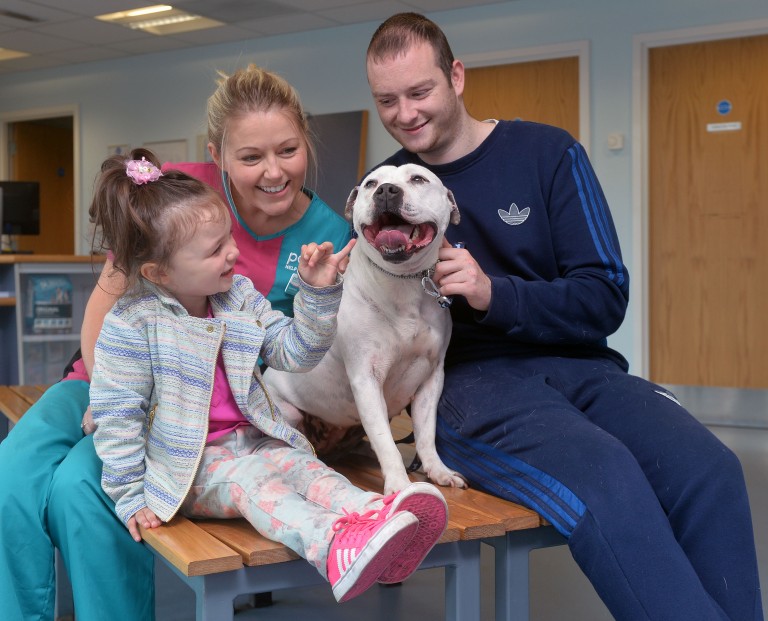 Pacemaker Press 27/5/2015 PDSA Nurse , Gemma with Eoin Murphy his daughter Alexis and with his Dog Mon after being reunited after 3 years at the PDSA building on the Shore Road in Belfast. Pic Colm Lenaghan/Pacemaker
Home
Blog

As of 6th April 2016 it will be a legal requirement for your dog to be microchipped.

The new rules are designed to make dog owners more accountable for their animals as well as providing better protection for pets which go missing.

PDSA vets were able to reunite a Staffordshire Bull Terrier, that went missing for three years, with her owners thanks to a microchip.

Four-year-old Mon went missing from her family home in Belfast in 2012 after escaping from the garden. Her owner, Eoin Markey, tried in vain to find his beloved pooch, putting up posters and searching the local area but Mon was nowhere to be seen.

But two railway workers came across a lone dog on the track and took her to veterinary charity PDSA’s Pet Clinic on Shore Road.

PDSA Veterinary Nurse, Gemma Vance, said: “Mon was brought to us as a stray dog and so we scanned her for a microchip. Much to our relief she had been chipped by her owner and we were able to check the database and find not only her owner’s contact details, but also that she had been missing since 2012.” 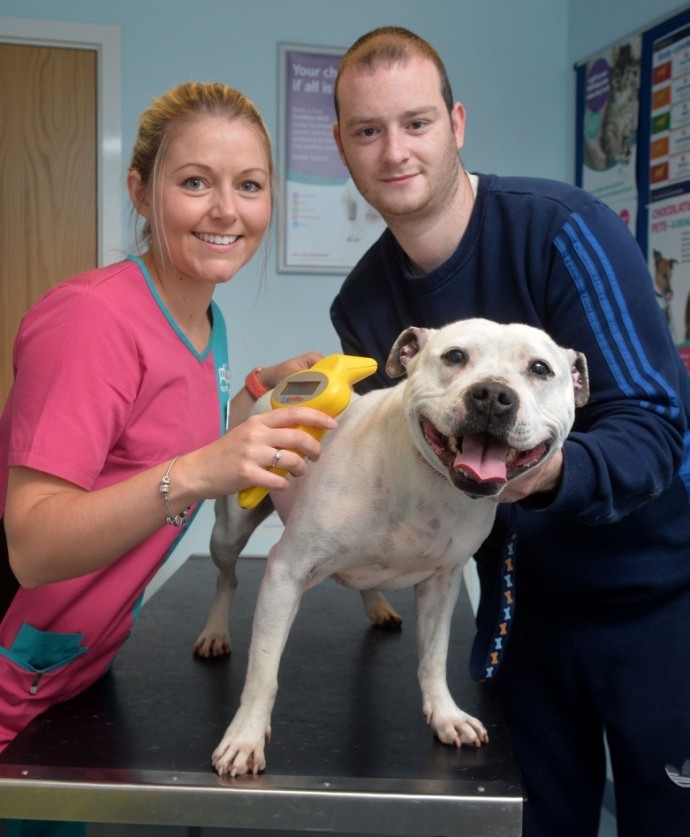 Gemma immediately picked up the phone and called a shocked Eoin to let him know Mon was safe and well.

Eoin said: “I answered the phone and a voice told me they had found Mon. I couldn’t believe it. I had to ask if they were sure it was Mon as she’d been missing for so long. It was a bolt out of the blue!

“I’m so grateful to the people who found her and took her somewhere safe, and also to PDSA for checking if she was microchipped. Me and my partner often spoken about Mon, wondering what had happened to her and whether she was still alive. She left a huge hole in our lives and anyone who has lost a pet will know just how heart-breaking it is. But when we saw Mon, my partner burst into tears and I think Mon was pleased to see us too!”

Every year, thousands of pets across the UK go missing. Sadly many are never reunited with their owners, but microchipped pets stand a better chance of a happy homecoming.

Research from the PDSA Animal Wellbeing (PAW) Report found 84 per cent of dogs are microchipped and only 60 percent of cats. This leaves millions of pets at greater risk of never being reunited with their owner if they go missing.

Gemma adds: “Mon wasn’t wearing a collar when she was found, so I was relieved when I scanned her and found her microchip. Sadly, many other pets aren’t so lucky.

“Here in Northern Ireland we’re ahead of the rest of the UK, with microchipping of dogs being a legal requirement. Although any dog in a public place must wear a collar and tag by law, collars can sometimes come loose. It’s also important to remember that cats should be microchipped too, even indoor cats can escape through open doors and windows.”

PDSA’s vets and nurses in Belfast care for over 8,000 sick and injured pets from across Northern Ireland at its Pet Hospital in Belfast. It costs the charity almost £1 million every year to provide this service. To find out more about PDSA’s work go to pdsa.org.uk.