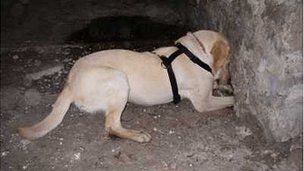 We have heard of dogs being used to sniff out drugs, firearms and even cancer but it now seems that they have the nose to save our most treasured stately homes. Seven-year-old golden Labrador Sam spends his days locating the smell of fungus, and has become one of only two dogs in the country who can detect dry rot.

Known as ‘rothounds’, the dogs are brought in at the early stages of fungal detection and are able to locate the problem at the source thus allowing the treatment to be targeted more accurately.

This summer Sam spent time at Wimpole Hall in Cambridgeshire helping to sort out their dry rot problems. Collections manager, Lisa Voden-Decker, says: “Sam’s sniffing skills allowed him to sweep spaces and locate rot within concealed timber and masonry. When he smelt it he became motionless, confirming its presence in areas we know were affected, and in a couple we didn’t.”

Sam can locate the smell of dry rot among any other fungi. Owner Mr Monaghan says: “When he finds it, he drops to the floor with his nose in the direction of the scent. It’s very important not to cause any damage to a building like Wimpole Hall, and Sam is calm, focused, and will go about his work carefully and quietly,” his owner adds. “You certainly couldn’t use a sniffer Spaniel for this work. Can you imagine one leaping around and skidding across 300-year-old floors? You’d have a shattered Ming vase on every corner.”

See our gallery of famous faces with their feline friends.

A rescue cat has broken a new Guinness World Record for highest decibel-rated purr by a domestic cat.