Rufus and Heidi didn’t get the chance to Climb Every Mountain (or even any mountain) last time they were in the Alps – they were just passing through on last summer’s Terriers on Tour road trip. Now the Norfolk Terriers were back for a weekend stay in Zermatt. And this time they were able to climb the Matterhorn – or at least to walk down from its snowy shoulders back to their luxury chalet – Chalet Carmen in Zermatt. 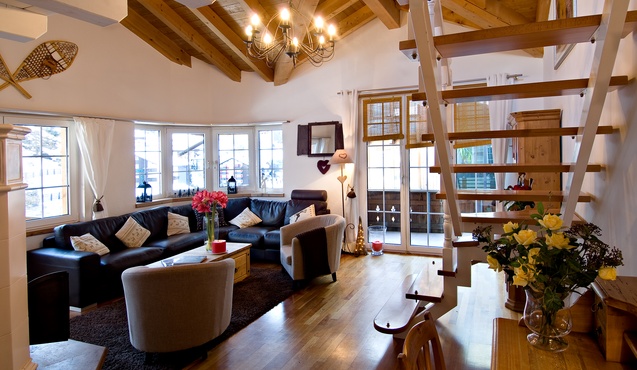 Zermatt’s a full day’s drive from London, and breaking the journey over two days was going to make for a much more pleasant trip. Again, the simplest way to get the dogs over to the continent was a quick trip under the Channel on a Eurotunnel train. As always, Eurotunnel provided us with a brilliant pet-friendly journey – Rufus and Heidi were totally unfazed and content as we drove the car on to the train, parked, and, little more than half an hour later, drove off again at the other end.

First stop, for lunch, was Arras, who’s beautiful Grand‘Place was to play host to the annual Main Square Festival, including stars such as London Grammar, the Black Keys and Skrillex a few weeks later. Much of the Grand‘Place was destroyed in the first world war, but the pretty Flemish façades on the buildings around it, dating back to the 17th and 18th centuries, were lovingly reconstructed to impressive effect. After a quick look around the Place des Héros, just around the corner and just as beautiful, we were back on the road again and heading for Dijon. 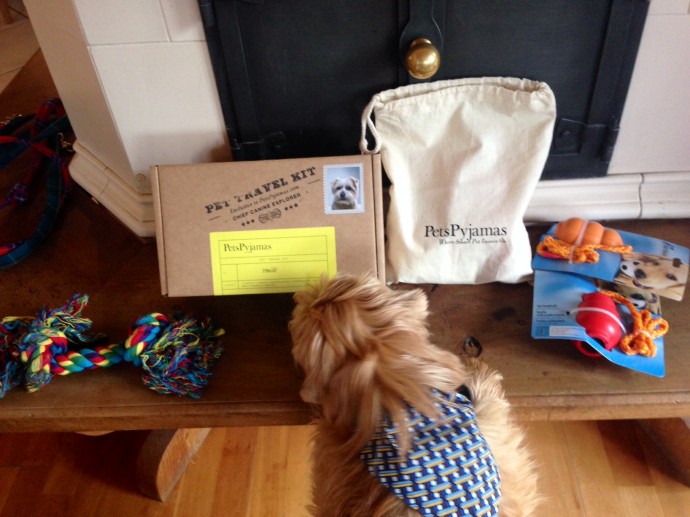 Rufus has got his eye on Heidi’s PetsPyjamas pet travel kit and some extra toys left by the chalet company, Mountain Exposure.

We had booked a room half an hour west of that city of mustardy renown, at the Abbaye de la Bussière. This beautiful former abbey, set in gorgeous parkland, was taken over in 2005 by the Cummings family, who had previously had great success in creating a similar relaxing retreat at Amberley Castle in West Sussex. As we drove up the sweeping gravel drive past the pretty little lake in front of the abbey, Rufus and Heidi’s first surprise was to spy through the car windows two tiny horses on the front lawn. These two miniature Shetland ponies – they seemed barely bigger than our two terriers – turned out to be two of the Cummings family’s several pets.

As we emerged from the car, Clive Cummings welcomed the four of us, and after checking in and we were shown to our room. The walk to it allowed us to take in many of the abbey’s charms – up grand steps to the upper level, giving a great view up to the historic vaulted ceiling and down to the tiled ground floor, over a roof to an adjoining building, then up an expansive spiral staircase to our rather charming room with lovely views of the sweeping gardens below.  The restaurant has a Michelin star and we had a delicious supper of escargots with a goat’s cheese dressing and lamb.

The next day we were off again driving through the fabulous French countryside over the Swiss border to Täsch to park the car and to meet our Swiss friends and their adorable Parson Jack Russell Terrier, Wilson. Rufus and Heidi had met him only once before but had formed an immediate bond, and they seemed as pleased to see each other as we were to see Wilson’s keepers. A swift train trip up to Zermatt and we were met by Chris Jenks from Mountain Exposure to take us up to Chalet Carmen, which we had booked for the weekend. The chalet is gorgeous, in a fabulous position just 200 metres from the Schwarzsee cable car, with a balcony looking over the town and up to the mountains. It was super-comfortable, and the dogs made themselves immediately at home. 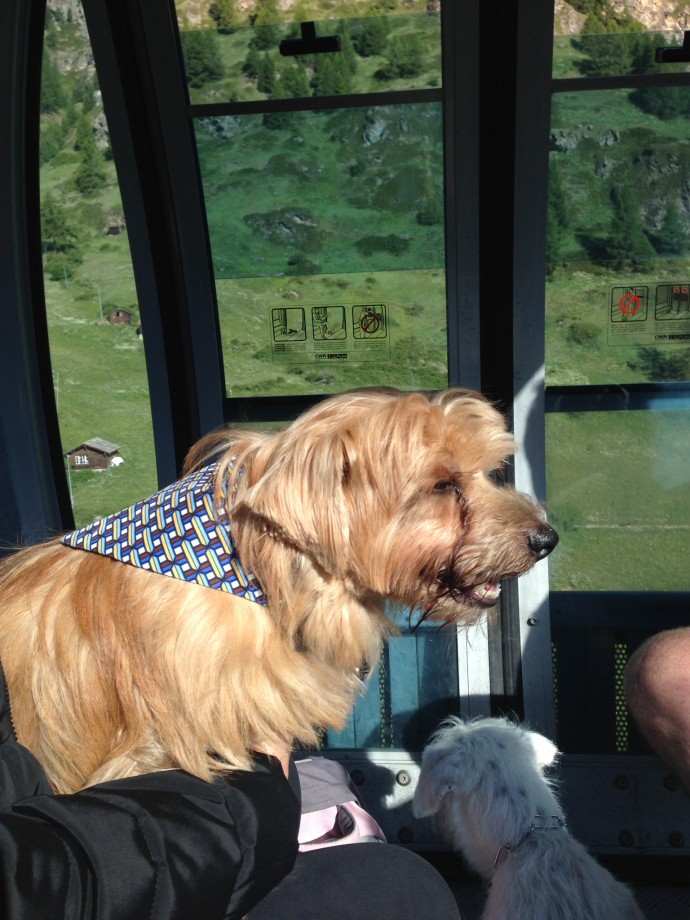 Thoughtfully Mountain Exposure had provided dog bowls and a new toy for each of the dogs, and a bottle of champagne for us. The owner of the company, Donald Scott, joined us for a drink and had already booked dinner for us in a pet-friendly bar/restaurant, The SnowBoat, for Friday night’s supper and Chris explained that he would be cooking dinner for us at the chalet on Saturday night. The dogs joined us for a delicious steak and burger supper at The SnowBoat, and then we returned to the chalet for an early night, in readiness for our big walk down the mountain the next morning.

After a quick breakfast we were up and away on the ski lift with dogs dressed in their alpine best bandanas from their personalised travel box that each pet gets when their owner makes a booking with PetsPyjamas. The idea was for us all to walk down from Schwarzsee on the shoulder of the Matterhorn – a 15 kilometre walk. It would take all day, but we would be making plenty of stops for coffee and food on the way, and we could always carry little Heidi if she found it too much. We started with home-made pastries and coffee at the Schwarzsee restaurant, where we chatted to the charming Irish/Dutch couple who run it, Dave and Tanja. 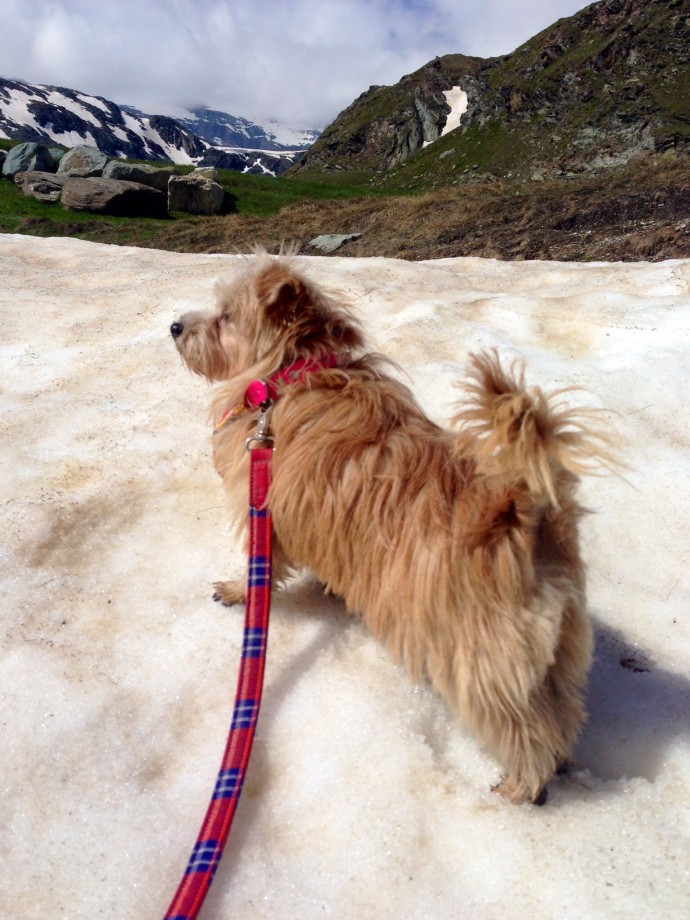 Heidi on the snow near the very dog-friendly Schwarzsee hotel/restaurant , run by Irish/Dutch couple Dave & Tanja.

We weaved our way down the mountain – luckily our Swiss friends knew the way as they had been on walks in Zermatt before. The views were never less than beautiful as we went through varied landscapes from rock and snow to high moorland to forest to wildflower meadow, passing small lakes including the artificial one behind the Zmutt dam, which we walked across. 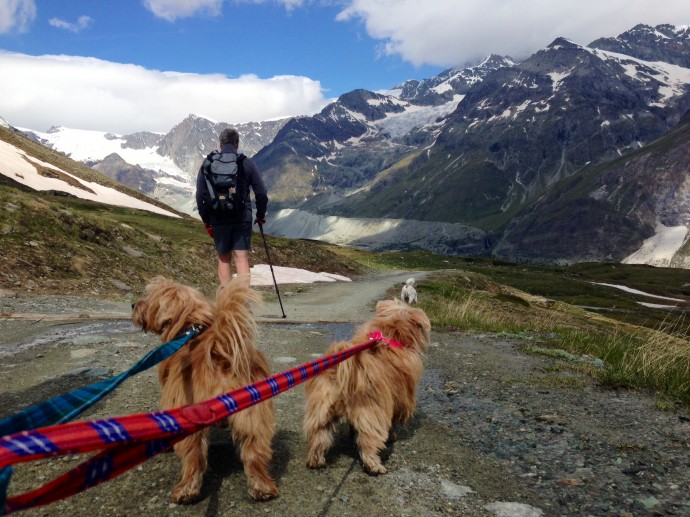 Rufus & Heidi following behind Wilson on the way down towards the Stafelalp Restaurant, where we made a stop for coffee

Wilson, was without doubt the most energetic of our party, wandering this way and that on the end of his long extending lead, but Rufus and Heidi were just as keen on the walk – they looked as though they were having the best fun ever, stimulated by the new sights, sounds and smells of the mountain landscape.

We stopped for lunch at the Jägerstube restaurant in Zmutt and had the dish of the day, fresh pasta with mushrooms, which was very simple but utterly delicious, and then got ready for the final descent to Zermatt. The walk had taken nearly all day, but had been so much fun and so enjoyed by the dogs.

After we’d had a little snooze, Chris arrived to get supper ready for the evening – he was cooking lentil and feta salad, mountain lamb, crème brûlée and local cheeses. Chris had trained with chef Michael Caines of Gidleigh Park and cooks at the Mountain Exposure chalets throughout the winter. Supper was delicious – the dogs were very tired and happy sniffing round for the odd crumb – and later on Rowena from Mountain Exposure joined us for dinner. 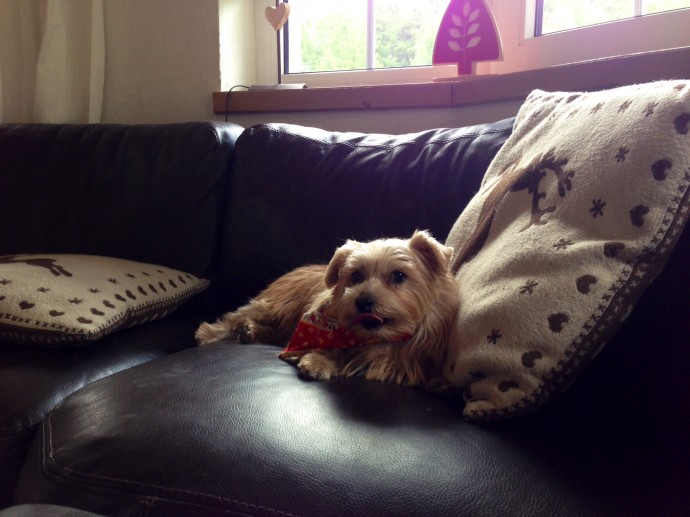 A very cheeky Heidi jumps up on the comfy leather sofa at Chalet Carmen and sticks her tongue out at us when we tell her to get down!

The next day it rained and our Swiss friends were due to leave. The dogs said their farewells and we all agreed that they had enjoyed their holiday as much as we had. The trip had been a great success, and bringing the dogs with us had made the weekend away far more fun.

After a lazy morning we ventured out to the town to the Matterhorn Museum, which tells the mountain’s fascinating story, including the first successful (but ultimately disastrous and tragic) ascent by Edward Whymper, followed by a delicious rösti at one of Zermatt’s oldest eateries, Café Dupont. Later we went for drinks at the very cool Vernissage lounge bar in the Backstage Hotel, which overlooks the hotel’s cinema room (which itself transforms into a nightclub later in the evening).

The next day we were off again, driving over the mountains and to Alsace, where we stayed at the Hostellerie Schwendi in the pretty village of Kientzheim. On a beautiful sunny afternoon, we enjoyed a stroll around the vineyards surrounding the town, which is on the Alsace “wine route”. After some of the local wine and a delicious trout dinner served on tables in the square outside our hotel, we had a restful night, leaving us well prepared for the final stretch of our drive home.

If you want to know more or go to Carmen Mountain Chalet yourself – pick up your bone and call the Pet Concierge on 0845 154 2104 or email us at –woof@petspyjamas.com

Laura Tenison MBE, Founder & MD of JoJo Maman Bébé tells us how her rescue dog, Ruby Tuesday loves to holiday with the family in France.

Schoolgirl opens up her own pet boutique

An 11-year-old from Liverpool has opened her own pet boutique.