Pet Inspectors Rufus and Kiki took a trip with their humans Denise and Rory to stay at Glassonby Old Hall, a gorgeously restored 15th-century Cumbrian longhouse that is perfectly placed to explore both the Lake District and the North Pennines Area of Outstanding Natural Beauty.

Although there is usually a limit of two canine visitors at the property, the owners kindly agreed to let them bring along Denise’s daughter’s dog Lulu, a Cavachon, to play with Kiki, because Rufus was recovering from a back problem and would be less mobile.

However, not to be thwarted, Rory had brought along a pet buggy and dog carrier so that Rufus would be able to enjoy the experience just as much as the others. Here’s Rufus’s account of the trip…

Kiki and I were thrilled to be off to the rolling grassy fells of the Eden Valley, which is fantastically scenic in itself and also sits between two of our other favourite destinations – the Lake District and the North Pennines. An endless number of wooftastic long walks with beautiful views in every direction. We left home at lunchtime and headed up the M6, arriving in the early evening at our lovely house, which is one of several luxury properties in the area owned by The Rowley Estates.

Lulu the Cavachon had joined us for the adventure, and we were all thrilled when we first saw Glassonby Hall in its wonderful rural location. It’s on the edge of the village of Glassonby, with some stunning views. The interiors were sumptuous – perfect for a family gathering or a party of friends. 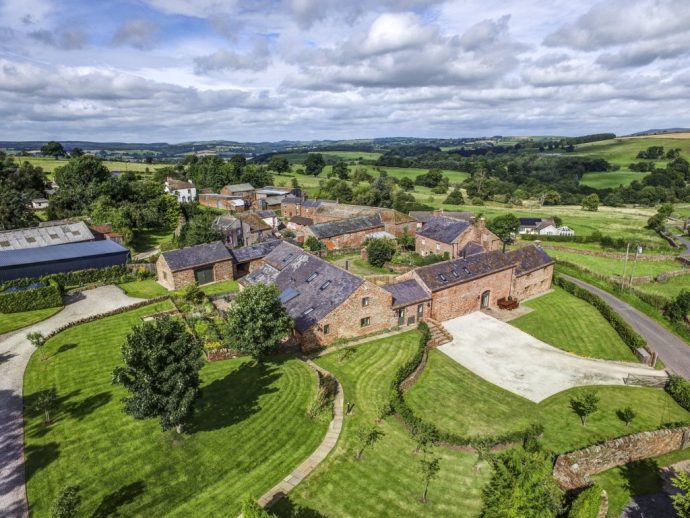 We were looking forward to welcoming Julie, Rory’s sister, and her husband John on Saturday, as it had been Julie’s birthday that week. The first thing we noticed was how warm and cosy the house was despite its size, and we were particularly impressed by the kitchen, with its super-toasty Aga.

Denise and Rory meanwhile were delighted with their hamper containing milk, eggs, bread, butter cheese, fruit, wine and other goodies, including The Rowley Estates’ famous and delicious homemade jam, made with their own raspberries. 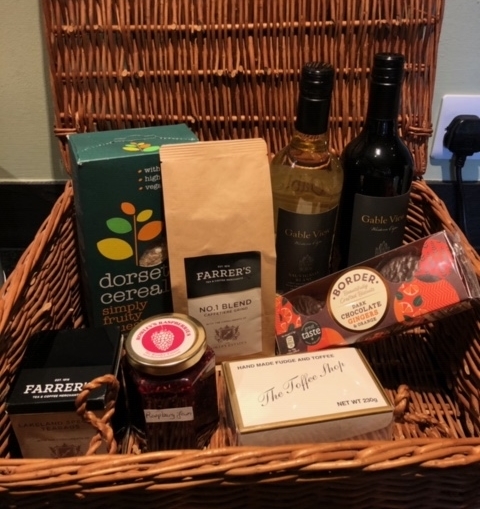 Tired from the journey, we immediately settled into our beds, which the humans had popped in front of the Aga. There was also a lovely enclosed garden where Kiki and Lulu were able to run off the lead and I had a short stroll (all I could manage with my bad back – I’m getting on a bit now, but I still enjoy seeing the younger dogs running around).

The humans took a while deciding which of the four gorgeous bedrooms they would sleep in,

but finally opted for the master bedroom, with a four-poster bed and a huge bathroom. We were to stay downstairs, but that was fine with us as we had the toasty Aga to snuggle up to. 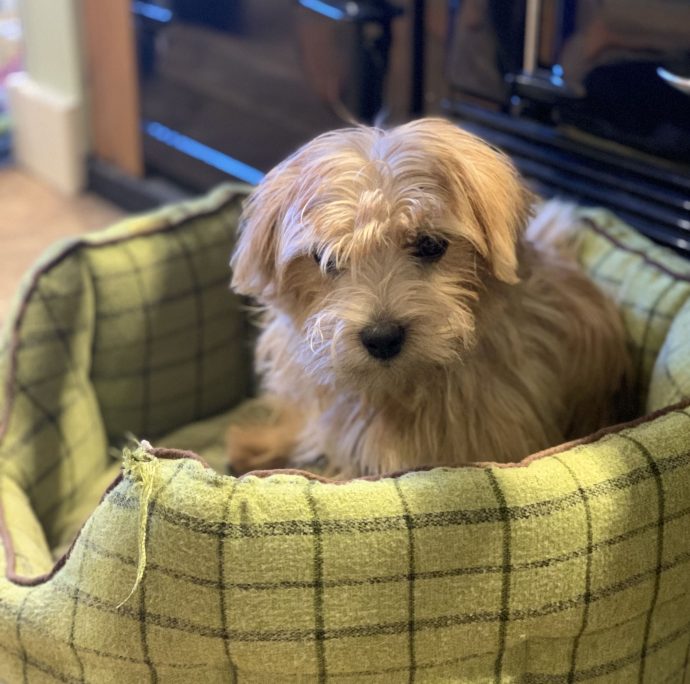 Rory took us for an early stroll around the village of Glassonby. Along the way he chatted to a local man who recommended the Fetherston Arms in Kirkoswald for dinner, and a walk to Long Meg and Her Daughters, a Bronze Age stone circle.

We decided to save that walk for when Julie and John arrived on Saturday. After a morning spent luxuriating at the house like lords of the manor, we decided to take a trip to the lovely village of Melmerby for lunch at the dog-friendly Old Village Bakery, which serves up delicious homemade lunches and also has a great shop with lots of dog-themed gifts.

We had a great welcome and were shown to a table in the restaurant near a lovely warm fire. After the humans had a lovely lunch of soup and baked potato with tuna (we got a little bit of that, obvs!), Denise bought cufflinks for Rory (with what looked like a picture of me on them!).

Later that evening we drove to The Fetherston Arms, just a few minutes’ drive away. We had heard how dog-friendly it was, but we weren’t prepared for the wonderful welcome we received when we got there. I was in my pet buggy as I can’t walk too far at the moment, and that immediately got a conversation going with some of the locals at the bar.

Thursday night is the pub’s Pie Night, so the humans ordered steak, mushroom and ale pies, which were absolutely delicious. Naturally we were offered a little bit to try. We got loads of attention throughout the evening, and even a friendly wave from everyone when we left!

After another lovely night in front of the Aga we set off on our morning stroll around the village, and then we all got in the car for a tour around some of the other beautifully restored properties that are part of The Rowley Estates – I love a little road trip! Rory was thinking of booking somewhere special for his birthday next year and wanted particularly to take a look at Blencowe Hall, but first we visited Melmerby Hall and Todd Hills Hall Farm. All were very pretty, but Blencowe Hall – which I heard sleeps up to 24 people – was particularly stunning.

Then finally we drove to another Rowley Estates property, Hause Hall Farm in Martindale. From the car park near there we walked up Hallin Fell, with beautiful views of Ullswater. So that I wouldn’t miss out because of my little disability, Rory put me in a dog carrier that he wore on his chest – that meant we could both see each other and the fabulous views, and he could cuddle me as we climbed. 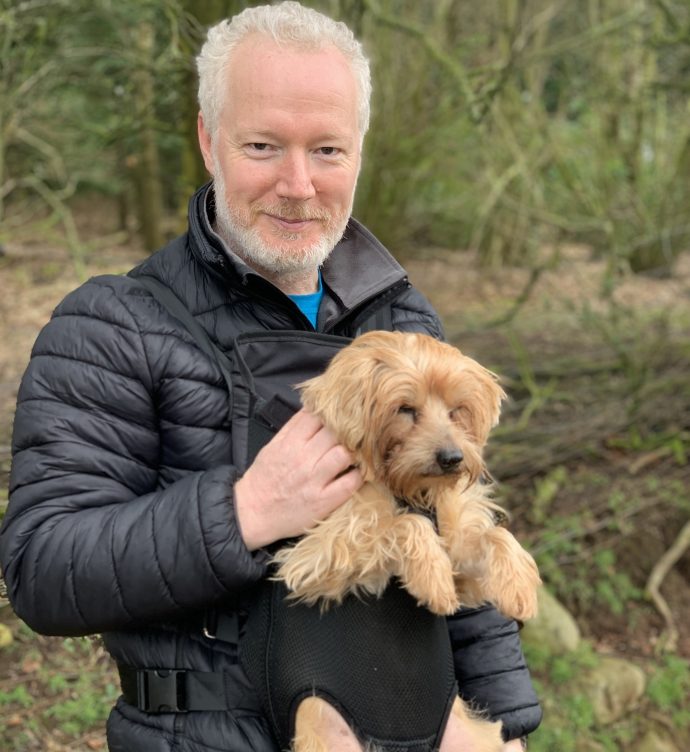 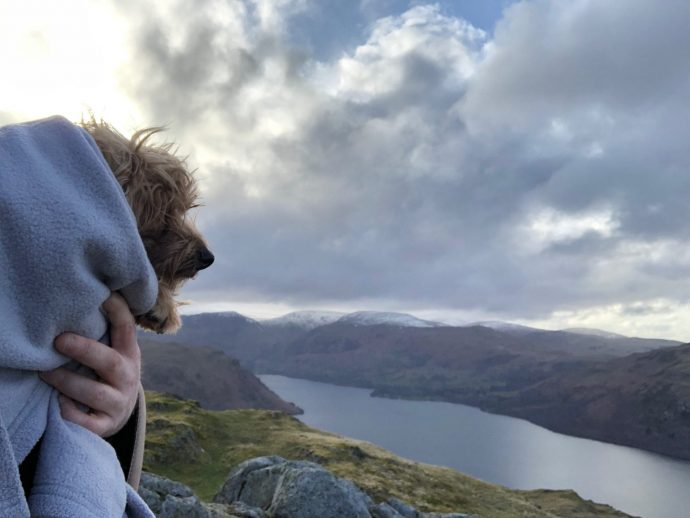 After the 30-minute steep walk up, we spent five minutes at the top while Rory took photos, and then it was a 20-minute walk down. Kiki and Lulu had a really good workout, and I was so delighted to have been included.  Rory then suggested tea at the famous Sharrow Bay, which we had passed on the way to Martindale. It’s extremely luxurious but also very dog-friendly, and the humans had a delicious cream tea with cake while we enjoyed some treats. 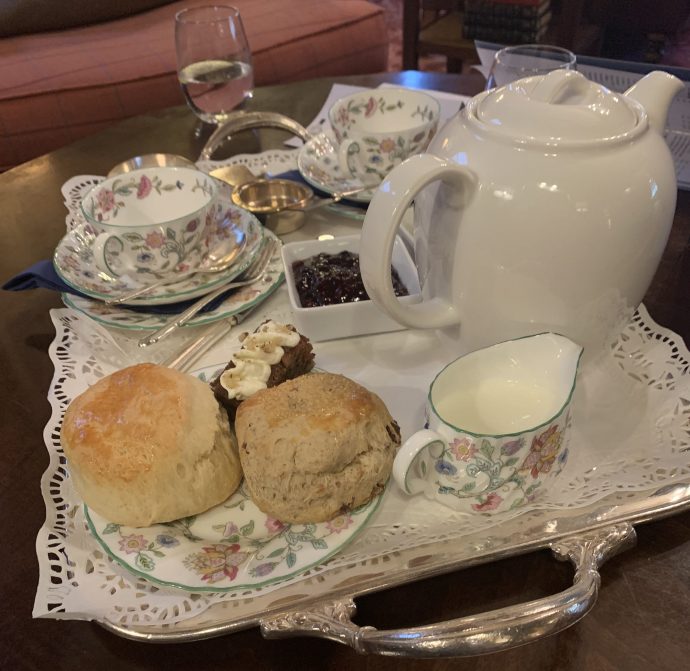 After that, we gathered some provisions to make a sausage and lentil casserole and had an evening in, tucked up in our beds in front of Netflix in the living room in front of a roaring log fire. 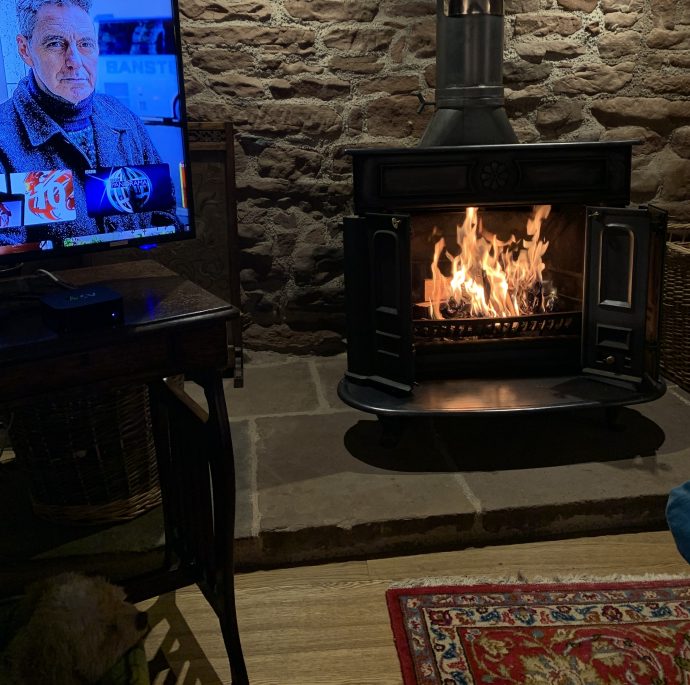 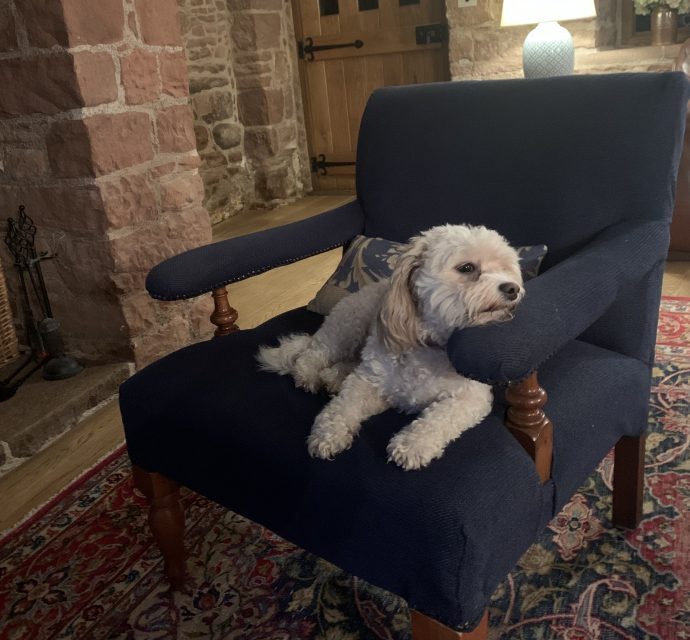 At 9am John and Julie arrived from Sunderland, laden with goodies for a lovely cooked breakfast, including fried bread and sausages. Kiki, Lulu and I were thrilled to get a sneaky bit of sausage each under the table, which set us up for the day. 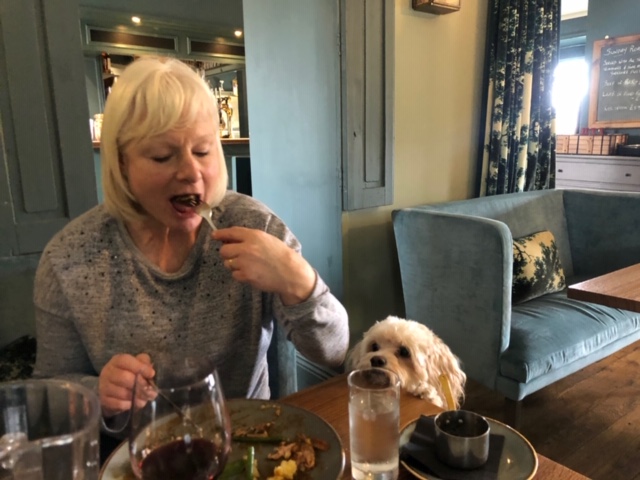 After a lovely play in the back garden, then a bit of a snooze, we set off to walk to Long Meg and Her Daughters, one of the finest stone circles in the North of England. It has also been immortalised by Wordsworth in a poem.

The walk went past the Church of St Michael and All Angels at Addingham. When Rory wandered inside what we thought was an empty church, with me on his chest in the special dog carrier, we were surprised to be greeted by another dog, a Border Terrier, and then shortly afterwards by its humans, a very nice old couple who were involved in the restoration of the church.

Top 10 Dog-Friendly Days Out in Yorkshire

The church had some lovely stained glass windows and interesting gravestones. After looking at a few of the stones we carried on along the public footpath and through a field of pigs, who seemed a bit too interested in us dogs – we had to make a run for it! 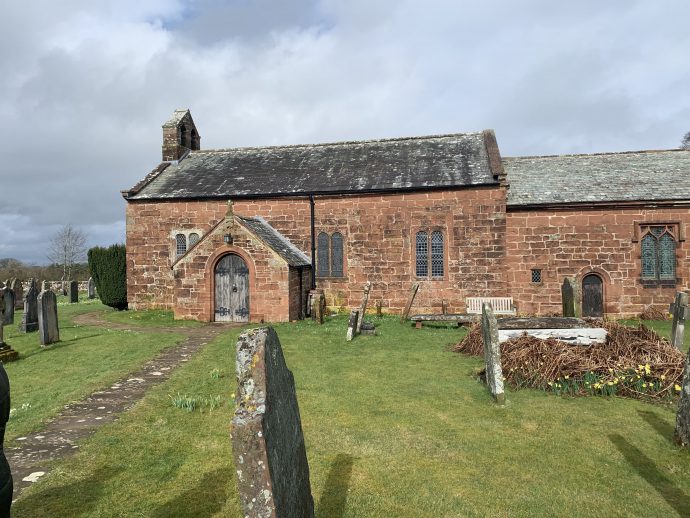 Then suddenly a lovely dog, a bit like a Parson Jack Russell but not quite, appeared out of nowhere. At first we wondered if he was lost, but he seemed to know his way around. John looked at his tag and found that he was from a farm five miles away! He followed us all the way to Long Meg and Her Daughters, which was still a couple of miles further on.

The stone circle – a bit like Stonehenge but not so tall, and with a farm track running through the middle of it – was impressive. The farm dog ran and played around the stones with Kiki and Lulu, and then followed us halfway back home too before disappearing as suddenly as he had arrived.

We then drove to Melmerby for lunch at the Old Village Bakery again, as we had got such a tail-wagging welcome last time. On returning to our baronial home, we dogs had a lovely snooze in front of the Aga and then joined the humans for drinks in the living room and then accompanied them to dinner back at the Fetherston Arms in Kirkoswald. Denise had booked a table this time, which is recommended at weekends, when it gets super-busy. The humans had another delicious meal, and we dogs attracted lots of interest from the other customers. 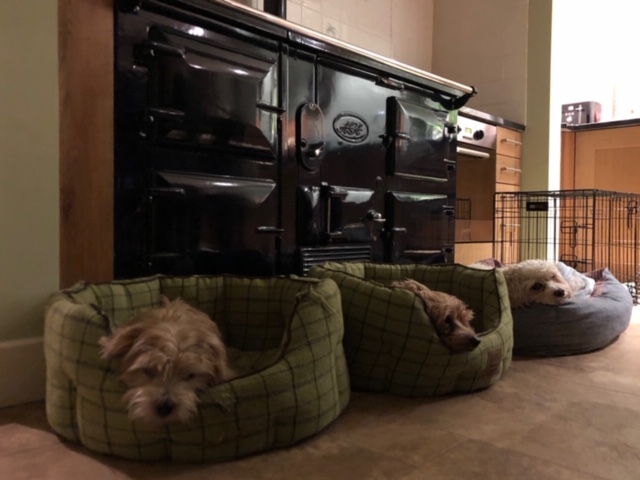 After another walk around the village we helped the humans eat their delicious breakfast of scrambled eggs and smoked salmon, followed by toast with some of the delicious homemade raspberry jam from our hamper.  Today we were going to have a day out travelling on the famous (and dog-friendly) Settle-Carlisle railway. The line runs through some of the most gorgeous scenery in northern England, and is known for its beautiful Victorian architecture and pretty stations.

We set off from the charming Lazonby and Kirkoswald station, and 75-minute journey to Settle was really lovely as we peered out of the window at the amazing scenery. 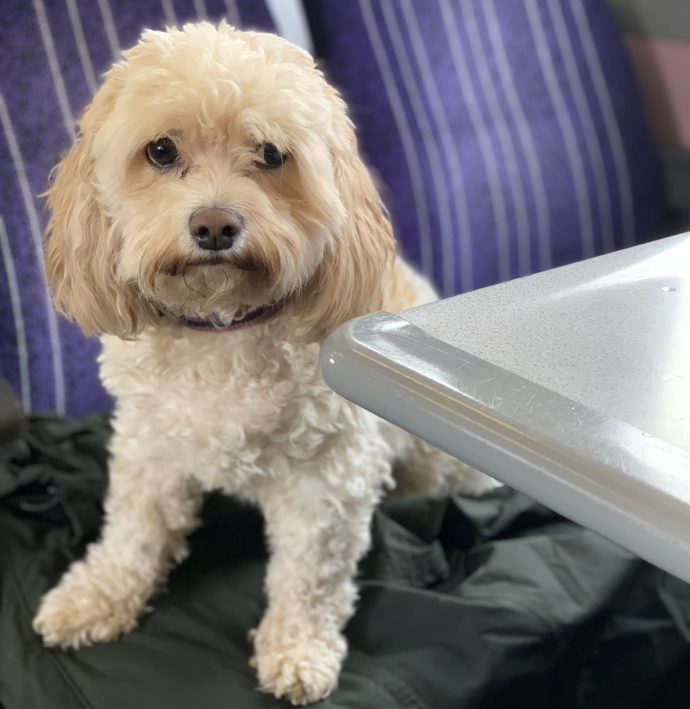 When we arrived at Settle we headed straight for coffee and teacakes at the dog-friendly Folly Coffee House, where we noticed one our PetsPyjamas “Well Behaved Dogs Welcome” stickers in the window.

While we sat in the cafe – which sits in a historic 17th-century building that also houses a museum – the humans planned a walk around the town.

We then visited the world’s smallest public art gallery – in a phone box! – the Watershed Mill shopping centre, where no one batted an eyelid at us dogs wandering around all the stores, and then ended up at the Harts Head Hotel, over the River Ribble in Giggleswick, for a delicious Sunday lunch (judging by the bits that were sneaked to us under the the table).

After that we returned to Settle station and had a lovely train ride back to where we had started, then got in the car back to the house for tea before John and Julie returned home. 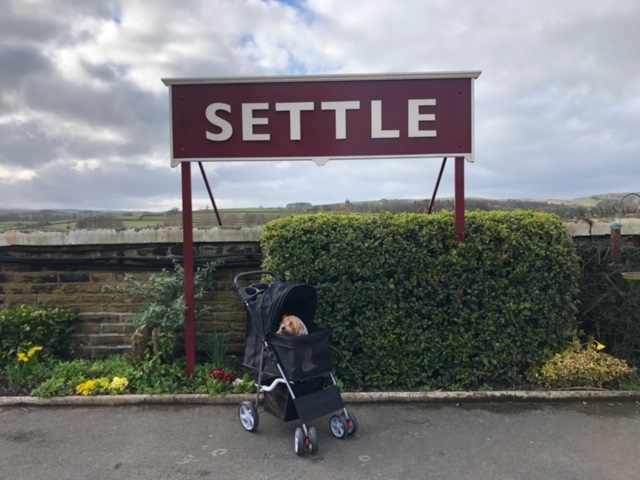 The next morning it was time to pack up and leave. Kiki, Lulu and I felt a bit sad as we had loved our stay at Glassonby Old Hall so much – the walks around the village, playing in the back garden off the lead, sleeping next to the warm and cosy Aga, and our amazing walks up Hallin Fell and to Long Meg. Rory and Denise also loved the house, and were talking about how they would like to live there (if only!), and we all decided we would like to come back again soon. 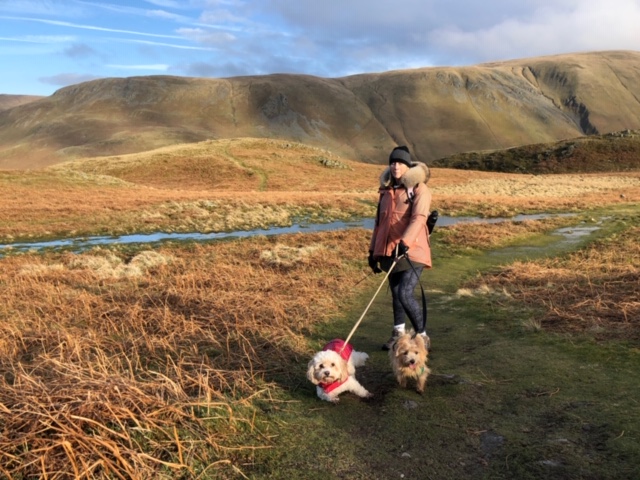